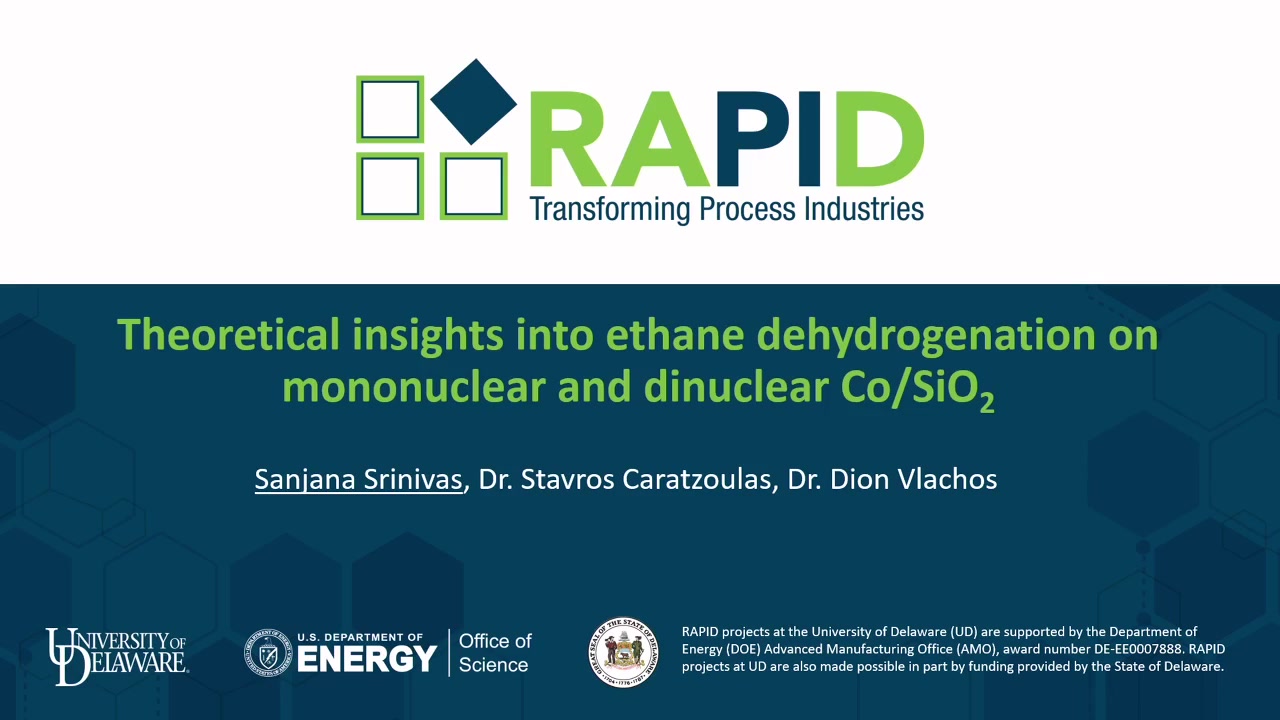 Owing to the recent shale gas boom in the US, production of ethylene via catalytic dehydrogenation of ethane is a viable alternative to steam cracking. Earth-abundant 3d and 4d metals dispersed on oxide supports have been recently garnering attention as alternative dehydrogenation catalysts, owing to their non-toxicity and high selectivity. In particular, highly dispersed Co(II) on SiO2 support has demonstrated high selectivity for ethylene (>95%) and good conversion. Two types of active sites have been experimentally investigated: sub-nanometer Co(II) oxide clusters; and monomeric Co(II) species in a tetrahedral coordination environment1,2.

This paper investigates differences in catalytic activity of the two types of sites and attempts to uncover unexplored theoretical efficiencies in earth-abundant 3d and 4d metals for small alkane dehydrogenation. We map out catalytic pathways using density-functional theory (DFT) calculations, rank them in kinetic importance using micro-kinetic analysis and validate them by comparing with experimental data.

We show that, contrary to what has been suggested in literature1, the rate-limiting step on the catalytically dominant pathway on sub-nanometer Co(II) oxide clusters is the second C-H bond activation. Informed by this development, we explore modulation of the reaction rate by varying the metal center.

We argue that on the dominant pathway on atomically dispersed Co(II) sites, the second C-H activation step entails a spin crossover. We use the Landau Zener model and non-adiabatic transition state theory to evaluate rate constants. We compare with other single-site metal species (Ga/Al2O3) with fully filled d orbitals.

Finally, we will present a comparison between the mechanisms (and corresponding barriers) on the two types of active sites and discuss implications for related metal ions with partially filled d-orbitals (Fe, Ni).

Preview Presentation:
Presenter(s):
Stavros Caratzoulas
Sanjana Srinivas
Dionisios Vlachos
Kewei Yu
Weiqing Zheng
Once the content has been viewed and you have attested to it, you will be able to download and print a certificate for PDH credits. If you have already viewed this content, please click here to login.

Marcellus Shale Gas Wastewater Reuse and Recycle
This webinar provides background on how water is used for drilling and hydraulic fracturing and includes a review of hydraulic fracturing fluid composition and...
Enabling Predictive Catalyst and Reaction Design in Asymmetric Organocatalysis (Invited)
Over the past several decades, the burgeoning field of asymmetric organocatalysis has introduced novel solutions to a number of transformations that construct...