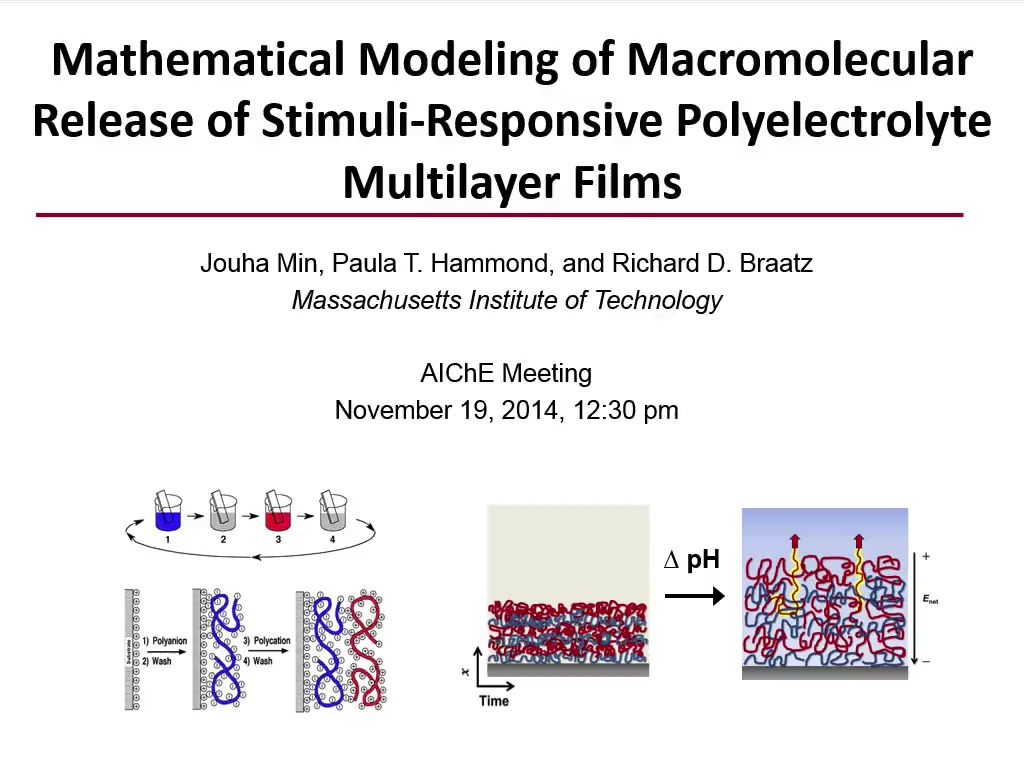 Polyelectrolyte multilayers (PEMs) prepared via the layer-by-layer (LbL) assembly technique have gained attention in many research fields due to their simplicity, versatility, and wide applicability [1]. The LbL technique is based on the alternating deposition of oppositely charged polyelectrolytes or any other multivalent charged species. The design of weak PEMs for delivering functional agents (e.g., antibiotics, growth factors) and in response to stimuli (e.g., changes in solution pH) is of interest for surface delivery applications, with the kinetics being dependent on molecular weight of the polyelectrolytes and differences between assembly pH conditions and the pH at which release takes place.

Despite the great potential for the use of weak PEM films as a stimuli-responsive system with desired release characteristics, a lack of understanding of the fundamental mechanisms underlying the behavior of these films has slowed development. This presentation presents a mathematical model suitable for describing and predicting the release behaviors of weak polyelectrolytes in response to external pH variations and swelling. The mathematical model also estimates the total fraction of polyanions released by the pH-induced charge imbalance within the film. To test the accuracy of the models, the theoretical results are compared to published experimental data.

More specifically, a mathematical model was developed to describe the overall release behaviors of polyelectrolyte chains based on theories of sticky gel electrophoresis, biased reptation, and polymer film swelling. Theoretical expressions for the degree of ionization of 20% quaternized poly-4-vinylpyridine (Q20) and poly-methacrylic acid (PMAA) in a weak PEM film showed good agreement with published experimental data [2]. Comparisons with experimental release profiles indicated the need for the inclusion of the effects of swelling and rearrangement into the mathematical model. This mathematical model predicted an induced electric field within the film of about 0.001 V/nm, and provided physical insights into chain configuration, extent of chain entanglement, and diffusion coefficient in the initial state. The model also demonstrated very close agreement with experimental release profiles [2] for weak PEM films over the full range of polyanion molecular weights Mw of 6, 22, 72, and 350 kDa. A quantitative comparison of the model with the experimental data [2] indicated a high accuracy and correlative power of the model. Furthermore, the mathematical model accurately predicted release profiles for a factor of fifty reduction in the molecular weight of the polyanion.

The comparison of model predictions with experimental data suggested that the swelling model describes the dynamic effects of diffusional resistance on the mobility of long chains in short times. The mathematical model with swelling successfully accounted for the dependency of the chain release time on the molecular weight of polyanion and the time-dependent entanglement length. The predictive capability of the mathematical model suggests the potential for its use in tuning stimuli-responsive release of macromolecules from weak PEM films and to provide kinetic information for designing weak PEM films with predictable release characteristics for many surface delivery applications such as therapeutic release of macromolecular components such as proteins, DNA, and enzymes.

Preview Presentation:
Presenter(s):
Richard D. Braatz
Once the content has been viewed and you have attested to it, you will be able to download and print a certificate for PDH credits. If you have already viewed this content, please click here to login.

Why Are The New People Making The Same Mistakes That The Old-Timers Made 25 Years Ago? Managing Organizational Change
When operating or maintenance personnel are promoted, retire, take vacation, are absent, or job duties are reallocated, how does the management system ensure...
Some Perspectives On the Impact of BIG Data On Process Systems Engineering
This presentation offers some advice to young researchers based on my own experiences in industry and academia. It also provides a personal perspective on the...