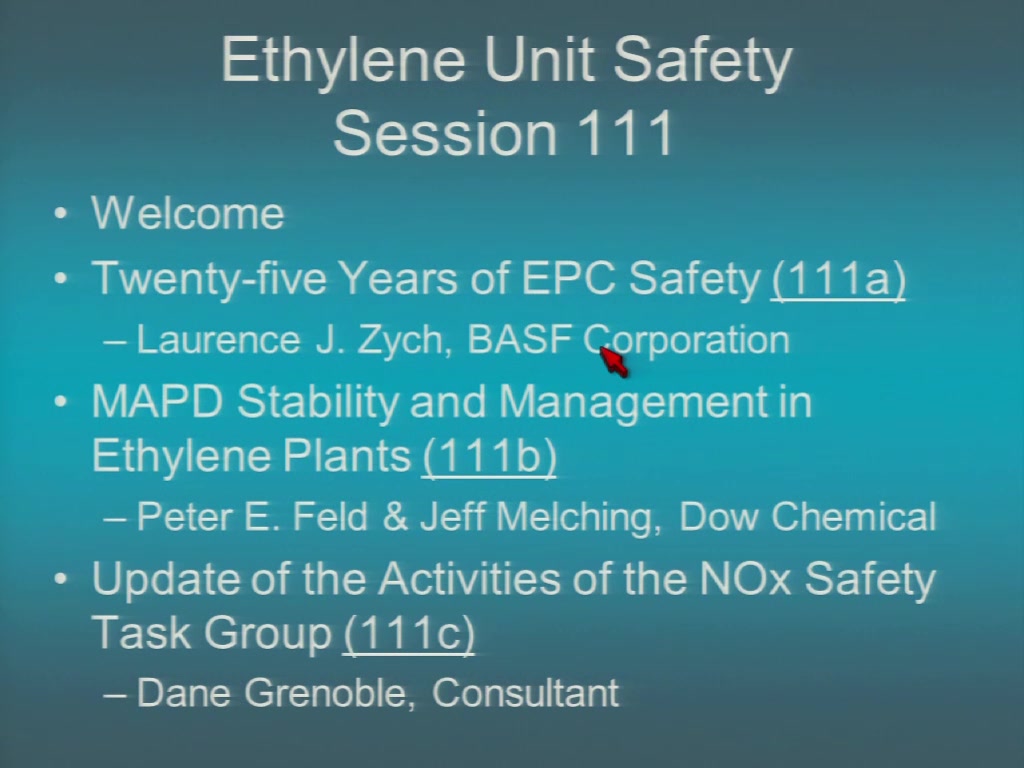 Accumulation of C3 (MAPD, Methyl Acetylene & Propadiene) and C4 (VA, Vinyl Acetylene) acetylenes to high concentrations has been known as a potential hazard in ethylene and butadiene plant operation. These components are heat and shock sensitive and are known to decompose explosively in high concentrations. Within the ethylene plants C3 and C4 acetylenes are present in the effluent from the furnaces, but only in low concentrations. As the C3 and C4 are separated from the other components the acetylene concentration will increase and potentially dangerous concentrations can be formed in the C3 and C4 distillation columns. A major incident occurred on October 23, 1969 in a Butadiene plant in Texas City, Texas. The butadiene recovery unit exploded most probably because of Vinyl Acetylene accumulation in the tower bottoms. The tower was operating on total reflux and it is believed that material was leaking through the overheads control valve allowing Vinyl Acetylene to concentrate and accumulate in the tower. The VA concentration was raised from 30% to over 60%. There were no fatalities, but pieces of column were thrown over 900 meters.

This paper gives some background information and an historical perspective how these C3 and C4 acetylenes issues have been handled over the years within The Dow Chemical Company.

In the 60s the MAPD rich C3 splitter bottoms was marketed by DOW as gas for welding. The (stabilized with propane and /or C4) gas was named MAPP.  Attention was given to control the right amount of MAPD and keep the product within specification. There was also some concern about safe limits for operation and transportation and studies were done to determine these. However, only sampling and lab analysis were done to prevent exceeding the safe limits. Also butadiene plants used distillation to remove acetylenes.

After the Texas City incident a major shift in design and operation occurred in the 70s and 80s. MAPP was discontinued by Dow as a marketed product and hydrogenation of the C4 and C3 acetylenes (even at the cost of some product losses) became the standard.

In the 90s with MAPD hydrogenation catalyst issues, new front end hydrogenation plants with no or only partial MAPD hydrogenation the concerns appeared again. All plants took appropriate actions, but safety limits were set very conservatively and sometimes approaches differed in various plants.

During last 10 years more company-wide policies have been implemented and further studies (dynamic simulations) have been done to understand the behavior during all phases of operation. All Dow olefins units must be aware of the potential hazards of acetylene compounds and must understand the risk factors for each plant configuration. Documentation is available to assist in determining the risk and describe preventive actions and safety limits for dealing with C3 and C4 acetylenes accumulation. These include maximum operating limits, alarms, LOPA analysis, and establishing maximum time allowed on total reflux.

Preview Presentation:
Presenter(s):
Peter E. Feld
Jeff Melching
Once the content has been viewed and you have attested to it, you will be able to download and print a certificate for PDH credits. If you have already viewed this content, please click here to login.

Where Is the Process Risk Mitigation? RAGAGEP, OSHA Combustible Dust NEP and General Duty Clause Violations
The severity and number of combustible dust explosions in recent years spawned (2007) and then re-enforced (2008) OSHA's Combustible Dust National Emphasis...
Benchmarking Industry Practices for the Use of Alarms As Safeguards and Layers of Protection
Operator response to alarms is a common risk reduction mechanism considered during layer of protection analysis (LOPA). Industry practices on how to treat...