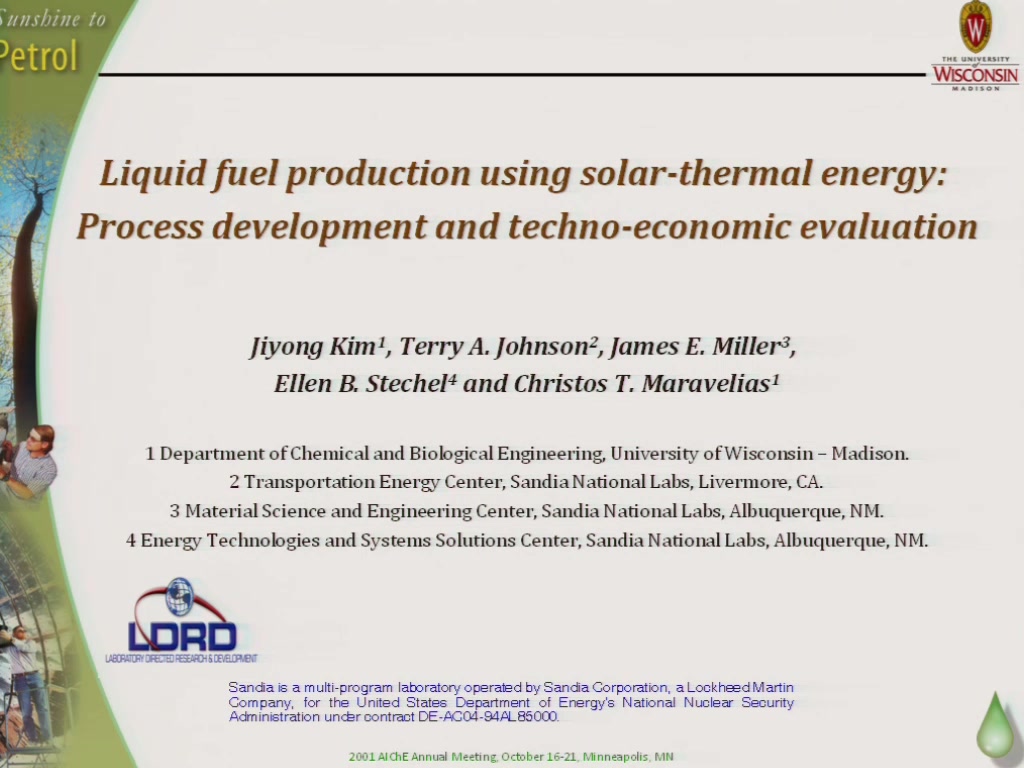 We have previously described a novel solar-based concept for the production of methanol from carbon dioxide and water. This system applies concentrated solar energy to thermochemically reenergize CO2 into CO, and then water-gas shift (WGS) to produce syngas (a mixture of CO and H2) that is fed to a methanol synthesis reactor. Aside from the thermochemical reactor, which is currently under development at Sandia National Laboratories, the approach is based on well-established industrial processes and component designs. Our previous work included an assessment of energy efficiency and economic feasibility of this baseline configuration for an industrial-scale methanol plant. We determined that an overall process energy efficiency (solar-to-fuel) of 7.1% could be achieved and a break-even price of the methanol produced using this approach would be 1.22 USD/kg. Our current work focuses on improvements to the baseline system. We propose several avenues for improvement: 1) alternative pathways to syngas including water splitting and combined CO2 and H2O splitting, 2) improved separations, and 3) alternative hydrocarbon products.

In all designs, we employed amine-based separation systems to remove CO2 from CO/CO2 or H2/CO/CO2 mixtures. However, we also studied the effect of replacing the CO2 separations system with an analogous CO separations system. We found that CO separations could provide a significant improvement in energy efficiency and utility costs for the CO2 splitting and mixed pathways.

To compare the improved systems to our baseline, we performed rigorous process simulations to determine equipment sizing and costing, as well as operational expenses (e.g., raw material and utility costs). We then performed detailed profitability calculations. We determined that the mixed pathway (i.e., simultaneous splitting of CO2 and H2O) has a number of advantages over the CO2-splitting or H2O-splitting pathways. Also, the production of methanol is slightly more attractive than the production of FT diesel.

Using the mixed pathway with MS as our new baseline, we then carried out sensitivity analysis studies to identify the main cost drivers. We found that the primary economic drivers are the high capital investment associated with the solar concentrator/reactor sub-system which accounts for more than 90% of the capital expenditure, and the high utility consumption for CO/CO2 separation. Economic parameters such as tax rate and interest rate are also important.

Rather than use a cost of CO2 as had been done previously, we expanded the boundaries of our system to include CO2 capture at a power plant. We determined that the effect of CO2 capture leads to small increases in the minimum selling price (i.e., break-even price) of methanol. We also studied how the minimum selling price (MSP) of methanol increases as a function of the distance between the power plant and the solar facility and the transportation technology.

The energy efficiencies of the different systems were also analyzed. Along with lower cost, the mixed pathway with MS demonstrated the highest efficiency. The primary energy efficiency (= chemical energy out (HHV) over total primary energy in) was calculated as 12.7% if process heat and electricity are provided from fossil fuels and 10.7% if solar power is the sole primary energy source. This 10.7% system efficiency is significantly higher than what can currently be achieved with photosynthesis-based processes, and illustrates the potential for solar thermochemical based strategies to overcome the resource limitations that arise for low-efficiency approaches.

Finally, the analysis indicates that a solar-thermochemical pathway to fuels has significant potential, and points towards future research opportunities to increase efficiency and reduce cost. Particularly, it is evident that there is much room for improvement in the development of a less expensive and more efficient solar concentrator/reactor sub-system, an opportunity that will benefit from the increasing deployment of concentrated solar power. In addition, significant advances are achievable through improved separations, different end products, and different degrees of process integration and distribution. Our investigation establishes a methodology for comparison and assessment of impact on both the economics and the efficiency for advanced system designs.

"This work was supported by the Laboratory Directed Research and Development program at Sandia National Laboratories, in the form of a Grand Challenge project entitled Reimagining Liquid Transportation Fuels: Sunshine to Petrol. Sandia is a multiprogram laboratory operated by Sandia Corporation, a Lockheed Martin Company, for the United States Department of Energy’s National Nuclear Security Administration under Contract DE-AC04-94AL85000. "

Preview Presentation:
Presenter(s):
Christos Maravelias
Once the content has been viewed and you have attested to it, you will be able to download and print a certificate for PDH credits. If you have already viewed this content, please click here to login.

Identification of Process Hazards in Laboratories and Pilot Plants
The focus of most laboratory experiments and piloting operations is the development of a new, innovative chemical process or the improvement of an existing...
Seamless Scaleup of Continuous Flow Reactor from Lab to 10,000 Metric-Tons Annual Throughput
As environmental and safety regulations become more stringent, the pharmaceutical and fine chemical industries are increasingly looking to continuous flow...