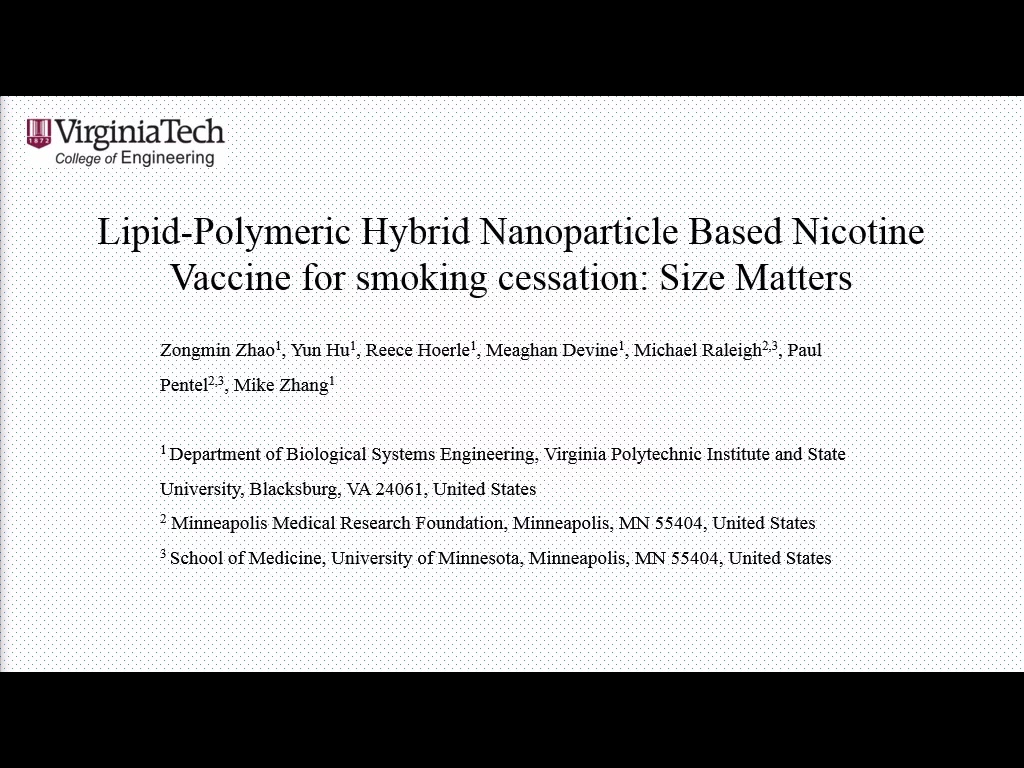 Tobacco use is prevalent worldwide and has consistently been the top preventable cause of many serious diseases, resulting in huge mortality, morbidity, and economic loss in recent decades. Due to the limited success of FDA approved pharmacological therapies, it is necessary to develop more effective treatment for smoking cessation. Currently, nicotine vaccine that can induce nicotine specific antibodies is considered as a promising approach against tobacco addiction. However, traditional protein-hapten conjugate nicotine vaccines have shown less than desired immunological efficacy due to their poor recognition and internalization by immune cells. Previous study in our group showed that negatively charged nanohorn supported liposome could effectively enhance the immunogenicity of nicotine protein conjugate based vaccine. In this study, nanohorn was substituted with Poly (lactic-co-glycolic acid) (PLGA) nanoparticle (NP) and a novel lipid-polymeric hybrid NP based nicotine vaccine was developed. In particular, the effects of particle size on the immunogenicity of hybrid NP based vaccine was investigated. 100 nm hybrid NPs were found to be taken up by dendritic cells more efficiently than 500 nm hybrid NPs. Mice immunization results demonstrated that both 100 nm and 500 nm nanovaccines could induce strong immune response against nicotine. However, a significantly higher titer of antibody against nicotine was achieved by 100 nm nanovaccine than 500 nm nanovaccine. Moreover, no evidence of systemic toxicity was observed on mice immunized with all the hybrid NP based nicotine vaccines. These results from this study suggest that lipid-polymeric NP based nicotine vaccine is a promising candidate for treating nicotine dependence.

Preview Presentation:
Presenter(s):
Zongmin Zhao
Once the content has been viewed and you have attested to it, you will be able to download and print a certificate for PDH credits. If you have already viewed this content, please click here to login.

A Quantitative Determination of the Specific and Nonspecific Interaction Forces Between Carbohydrate-Binding Module of CBH1/Cel7A and Lignocellulosic Biomass
Introduction Enzymatic hydrolysis of lignocellulosic biomass has been considered as one of the key steps in the biochemical conversion of cellulosic biomass to...
Body-on-a-Chip -- A Tool for Predictive Pharmacology/Toxicology
In this presentation, Professor Mike Shuler details his work to understand the response of the human body to various pharmaceutical and environmental chemicals...