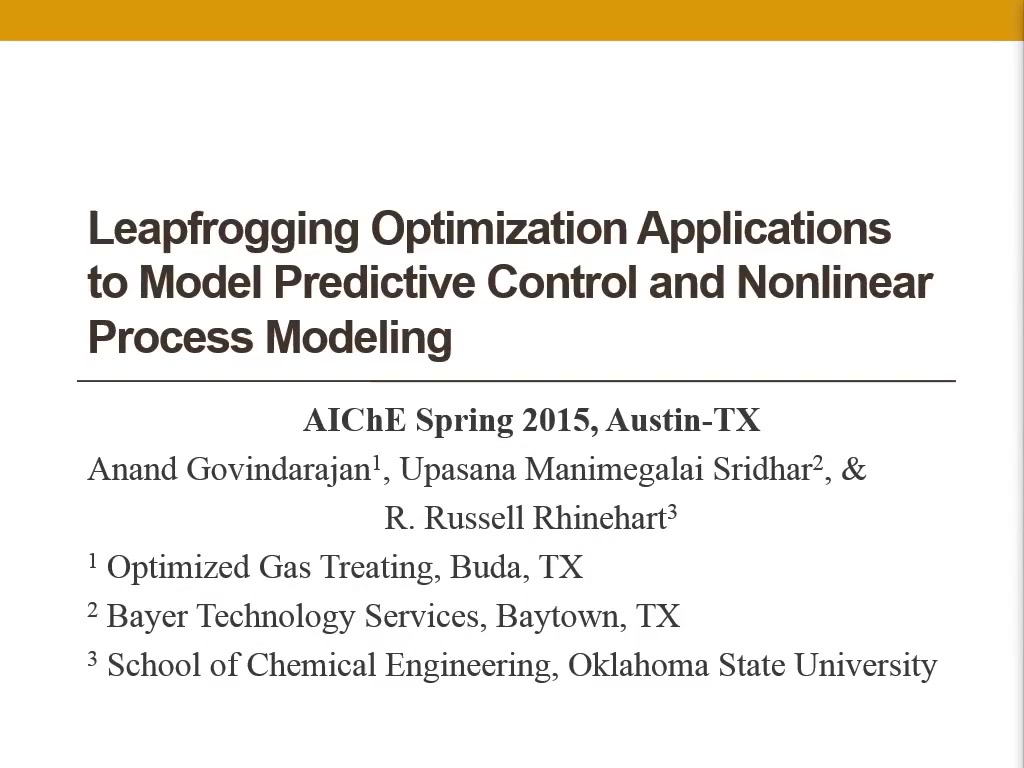 Conventionally used optimization methods in chemical engineering applications such as linear programming (LP), Levenberg-Marquardt and sequential quadratic programming (SQP) handle nonlinear objective function (OF) surfaces by linearizing or assuming quadratic behavior of the surfaces. And some only search for solutions on the constraint boundaries.  Process modeling and nonlinear model predictive control (NMPC) applications, however, present OF surfaces with surface aberrations such as steep slopes, discontinuities, multiple and interior optima, and hard constraints which require a robust and efficient optimization method. Therefore, an optimization method that can handle surface aberrations is required.

Leapfrogging (LF) is a recently developed direct search optimization method, potentially best-in-class, which can handle surface aberrations. LF starts with a set of players (trial solutions), randomly placed in the decision variable (DV) space. The worst player (player with the worst OF value) leaps over the best player into a reflected hypervolume [1]. The leapovers continue until all the players converge. LF is robust and efficient – with minimal computation effort (compared to conventional optimization methods), it can handle the challenges posed by nonlinear OF surfaces. LF was demonstrated on over 40 test functions and several modeling and NMPC applications.

In order to establish credibility of the LF optimization technique, this work is focused on demonstrating LF application to nonlinear process modeling and NMPC applications on two different processes – binary distillation simulation of a methanol-water system and a pilot-scale shell and tube heat exchanger unit. The two processes present different sets of challenges – distillation control is multivariable, interacting, nonlinear and has severe disturbances, and heat exchanger control is nonlinear, with delays and disturbances. LF is used, both for developing dynamic models and implementing MPC on the processes.

Demonstrating application to nonlinear process modeling and NMPC on each of those processes will create application credibility, reveal practicality and serve as proof-of-concept that LF can be an optimizer of choice for use in the process control community.

Preview Presentation:
Presenter(s):
Anand Govindarajan
Once the content has been viewed and you have attested to it, you will be able to download and print a certificate for PDH credits. If you have already viewed this content, please click here to login.

Opportunities for Co-Processing Biomass Derived Intermediates in a Petroleum Refinery
As the biofuels industry broadens to include advanced liquid hydrocarbon fuels, understanding commercialization opportunities and leveraging existing...
Owning Our Moments That Matter: Supercharged Human Factor Interventions That Guide the Safest Decisions Possible
When bad things happen itâs often asked, âHow did we get to this?â. The answer is typically â...