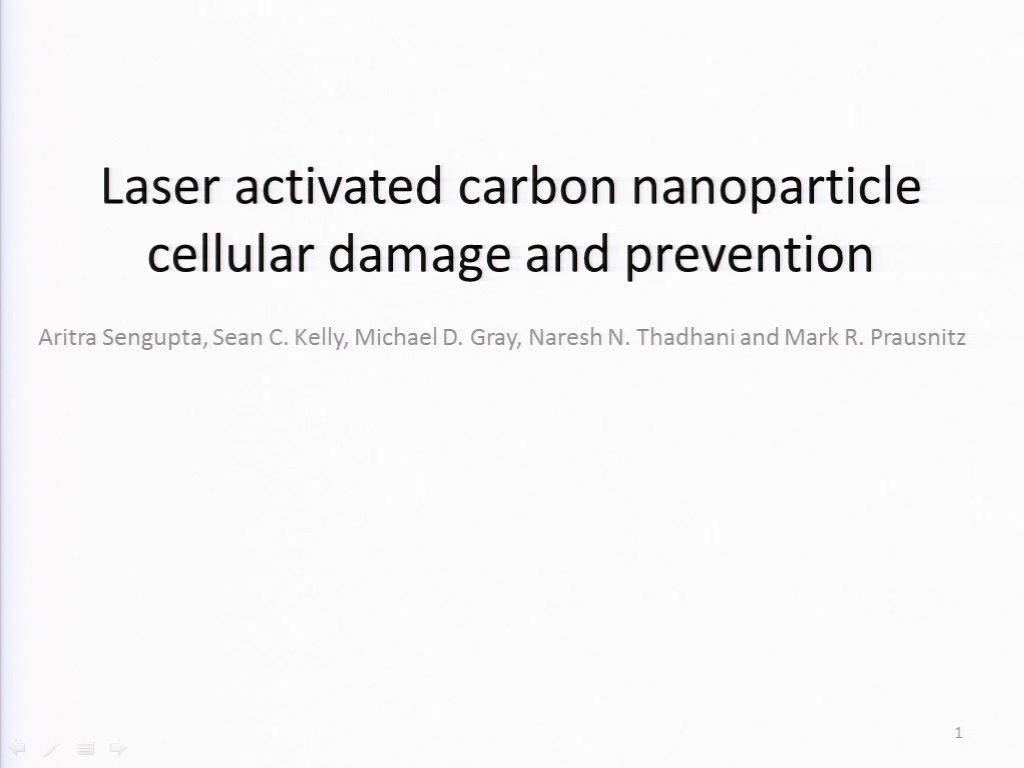 The cell membrane is a challenging barrier to cross because of its structure and composition. Endocytotic processes can be inefficient, especially for molecules that have therapeutic value such as siRNA, plasmids, etc. So it is a challenging task to come up with a method that can address the issue of intracellular delivery.

Various methods have been employed, like chemical modification of the drug to induce stronger binding to the cell, using vectors to “infect” cells or using a physical force to temporarily disrupt cells and increase their permeability. The physical methods are sometimes preferred because they are more broadly applicable and involve less modification to the drug. Some examples of these methods use ultrasound, electroporation and lasers for intracellular delivery. The tradeoff associated with using such methods is that generally the forces that cause the cell to permeablize can also cause a fraction of the cells to disrupt, fragment and die. So, there is a need to optimize the process and conditions under which physical methods are operated.

In our previous studies, permeablization of cells was observed when they were exposed to pulsed laser in the presence of carbon nanoparticles.1 Photoacoustic pressure waves2, generated as a result of laser-nanoparticle interactions, are believed to cause temporary membrane disruption, which effectively increases permeability. Since the carbon nanoparticles serve as strong laser-absorption sites, the overall absorption capability of the medium increases. This means that much lower laser fluence is required to have an effect on the cells compared to laser delivery systems without nanoparticle absorbers. This kind of drug delivery system is appealing not only because of its novelty, but also because it has the advantages of low exposures and better control of the acoustic field, both of which enable better targeting of drug delivery within the body.

Here we report i) the dependency of uptake and viability on the time of laser exposure, ii) optimized conditions to achieve maximum uptake with minimal loss to cellular viability and iii) potential ways to increase viability of the cells.

A Nd:YAG nanosecond pulsed laser (Continuum Powerlite III Plus, Santa Clara, CA) of 1064 nm wavelength was used for the exposure. The sample holder was made of Pyrex glass (Starna Cuvettes, 37PX-2) since it has high transmittance to infrared wavelength. Human Prostrate cancer cells (DU145) were used as a model cell line in this study. Carbon nanoparticles were made by sonicating carbon black (Black Pearls® 470, Cabot Corporation) in DI water, with Tween 80 was used as a stabilizer, to final carbon concentration of 0.4 g/L. The final suspension was made by adding calcein (10 µM) and carbon black (25 mg/L) to cell suspension containing ~1 million cells/mL in RPMI. Total volume of this solution exposure to laser was 570 µL.

The laser fluence and time were varied for the exposure. After exposure the cells were stored in ice (0 – 4ºC) for at least 5 min until all the exposures were done. The uptake and viability analysis was either done visually using a confocal microscope (Zeiss LSM META/NLO 510) or using flow cytometry (FACS LSR II, BD Bioscience, NJ, USA). To quantify cell fragmentation, we count the number of cell events while keeping the time to flow through the flow cytometer fixed and then compare the number of exposed cells to the unexposed controls. For staining the intact nonviable cells, PI was used. At least three replicates were taken for each experiment. The data acquired as uptake and viability were corrected by comparing them with the control (unexposed cells). Paired t-test was performed to compare between samples. Pluronic solution was prepared by adding 0.5 g Pluronic F-127 to 50 mL DI water, and then thorough mixing at 37°C, followed by sonication for 5 min until a clear solution was formed. The final concentration of the stock was 10 g/L.

When the exposure was set to 18.75 mJ/cm2 (Figure 1) and time was varied from 0, 1, 3, and 7 min, it was observed that uptake of calcein was observed in 7%, 29%, 61% and 87% of cells, respectively, while viability remained close to 100%. Moreover, when the fluence was increased to 25 mJ/cm2, the uptake initially went up from 55% of cells at 1 min exposure to 70% at 3 min, and then it fell to 56%. The viability was 87%, 86% and 56% at 1, 3 and 7 min, respectively. At the lower fluence of 18.75 mJ/cm2, the photo-acoustic pressure field intensity generated as a result of laser carbon interaction should be lower compared to the 25 mJ/cm2 field. We expect that the cells disrupt less as a result of these waves in the case of the lower fluence. Even when the time of exposure was increased, it did not cause increased loss of cell viability. More cells exhibited uptake of calcein in the presence of the field. In the case of 25 mJ/cm2, exposure initially at 1 min resulted in about 13% loss of cells with more than half of the cells with calcein in them. Since here the field was much stronger, exposure at longer times resulted in death of cells, which caused the viability to go down, which in turn reduced the uptake of calcein. The optimal uptake was found to be 87%, where DU145 cells with 25 mg/L carbon nanoparticles were exposed for 7 min at 18.75 mJ/cm2 laser fluence. It should be noted that such efficient uptake with high viability is much better than uptake reported by many other intracellular delivery methods.

Pluronic surfactants have been shown in the past to protect against membrane disruption and damage both in-vivo and in-vitro. Cells were exposed to laser pulses at 44 mJ/cm2 for 3 min as a negative control. This is a very extreme condition where many cells are killed. Figure 2 shows the effect of adding 5% v/v F-127 Pluronic on the uptake and viability. It can clearly be observed that when no surfactant is added to the system, the viability is about 28% with almost all cells calcein positive, which was expected from such extreme conditions. But when surfactant was added to the system and the same exposure was carried out, the uptake and viability significantly went up to the value of 85% and 90%, respectively. This experiment demonstrates that surfactant is able to save cells from damage.

This study supported the hypothesis that photoacoutic waves generated by laser excitation of carbon nanoparticles cause increased intracellular uptake of molecules into viable cells. The level of uptake and viability depended on laser exposure parameters. At optimal condition in this study, 87% of cells exhibited intracellular uptake of the marker compound, calcein, with cells maintaining almost 100% viability. It was also observed that damage to cells at strong laser exposures can be controlled using pluronics to further optimize uptake with reduced loss of cells. Overall this method holds exciting potential of delivering molecules efficiently into cells with low cytotoxic effect and can be of interest not only for in-vitro but also future in-vivo drug delivery into cells.

This work was carried out at the Center for Drug Design, Development and Delivery and the Institute for Bioengineering and Bioscience at Georgia Institute of Technology with partial financial support from the U.S. National Institutes of Health. 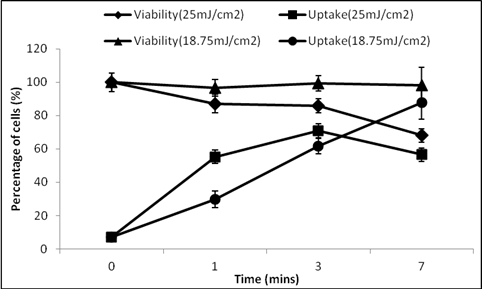 Figure 1: Photoacoustic effects on intracellular uptake and viability of DU145 cells as a function of laser exposure conditions, using calcein as an uptake marker and carbon nanoparticles at 25 mg/L. 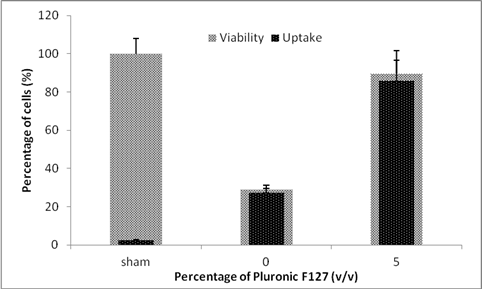 Figure2: Effect of adding F-127 Pluronic on the uptake and viability of DU145 cells. Cells were exposed at 44 mJ/cm2 for 3 min.

Preview Presentation:
Presenter(s):
Aritra Sengupta
Once the content has been viewed and you have attested to it, you will be able to download and print a certificate for PDH credits. If you have already viewed this content, please click here to login.