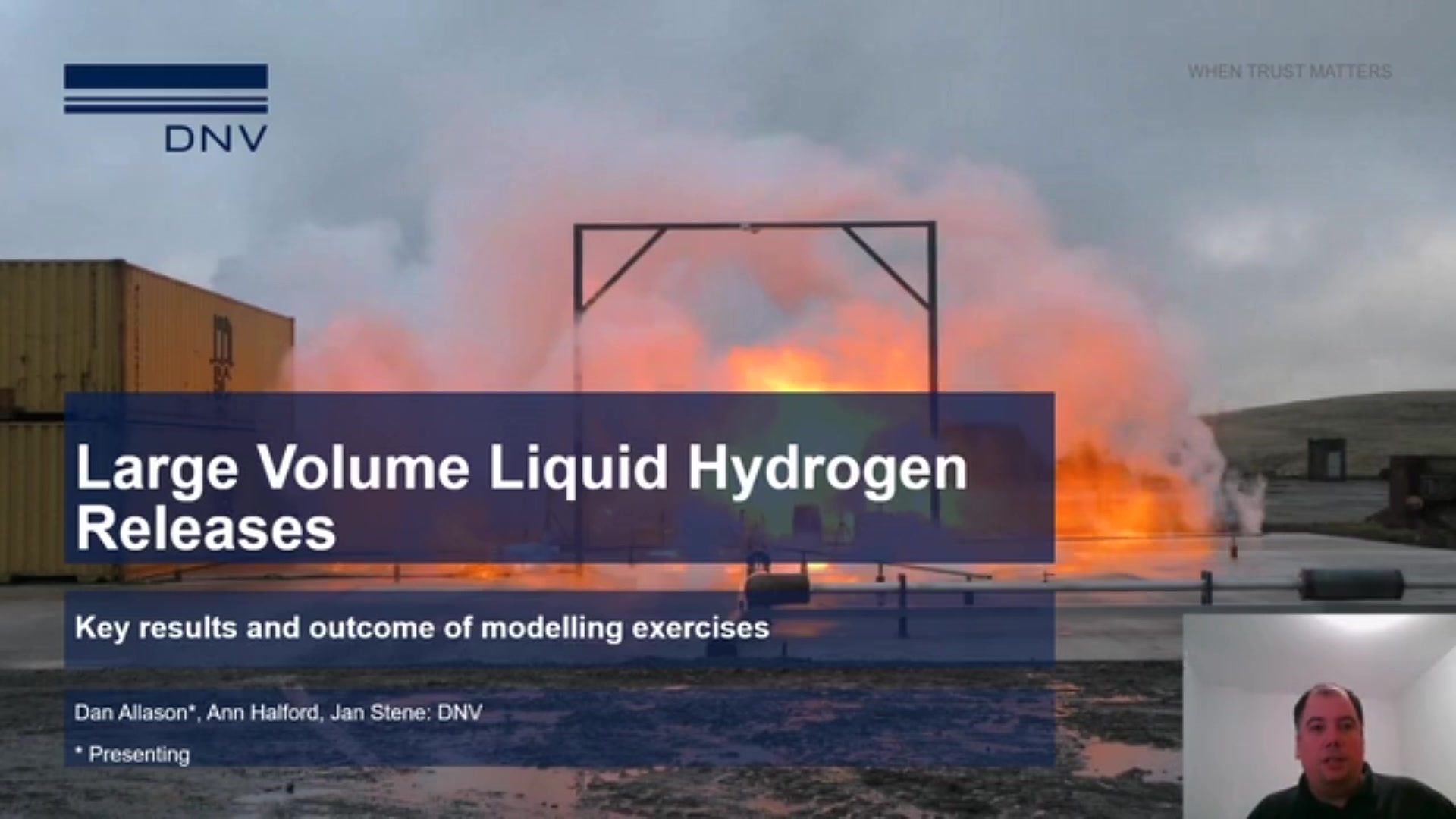 In line with energy transition commitments made by a growing number of governments worldwide, the decarbonising of ocean-going shipping and transportation remains a significant challenge. The difficulties in storing electrical energy from renewables in significant capacity makes it of little use against the requirements of running a ship at sea. Liquid hydrogen (LH2) forms one potential solution [1] where the required energy density / volume can be met for ships of all sizes. Over and above itâ€™s use as a fuel in the space industry, the use of LH2 in the maritime sector poses challenges in the scale of operations, number of usage points and proximity to personnel. In order to enable pilot projects and to identify and quantify safety related issues which may need to be resolved, it is necessary to conduct research. This research needs to produce data for the validation and development of predictive models for the hazards involved with LH2 at scales representative to the processes needed for the application. Some data at smaller scales exists [2 and 3] but the effects of scaling to the larger scales investigated here are not known.

The Norwegian Public Roads Administration (NPRA) is an administrative agency of the Norwegian government, responsible for planning, construction, operation and maintenance of Norwayâ€™s road networks at the national and regional levels. The agency also grants subsidies for Norwayâ€™s extensive system of ferry operations. In 2018, NPRA signed a contract for the operation of a hydrogen-electric ferry to serve one of the routes along the coast of Norway [4]. One concept for such zero-emission ferry transportation involves liquid hydrogen (LH2) as a concentrated form of hydrogen storage.

DNV GL Spadeadam Research and Testing was commissioned by the Norwegian Defence Research Establishment (Forsvarets forskningsinstitutt, FFI) and the NPRA to conduct a series of experiments investigating the behaviour of LH2 when large releases occur to the atmosphere and into a closed ventilated enclosure [5].

The project included two experimental campaigns to produce data related to outdoor leakage and also leakage into ventilated rooms. The present paper details the experimental arrangement, programme and results pertaining the outdoor leakage studies only. The quality of the data is discussed when compared to expected behaviour for outflow, pooling, dispersion and fire. The expected behaviour is illustrated by predictions from DNV GLâ€™s GasVLE, FROST and Phast software packages. Discussion of the performance of the models is given.

A total of 7 large releases (up to 50 kg.min-1) from a liquid hydrogen storage tanker were performed with variations in source tanker pressure, flow rate, orientation, ignition and atmospheric conditions. The data has been shown to be credible and suitable for model evaluations. Given the number of variables and relatively small number of experiments, it was not possible to entirely quantify all of the phenomena associated with the releases but this paper summarises observations of the following:

Preview Presentation:
Presenter(s):
Dan Allason
Ann Halford
Clara Huéscar Medina
Jan Stene
Once the content has been viewed and you have attested to it, you will be able to download and print a certificate for PDH credits. If you have already viewed this content, please click here to login.

Quantifying the Conditional Dependencies between Layers of Protections in Event Tree Analysis
An approach to include conditional probabilities when calculating probabilities of disaster in quantitative risk analysis is presented. 1 Since not all layers...
Top Ten Questions to Ask about Pressure Relief Systems in a Process Hazard Analysis
It is crucial for Process Hazard Analysis (PHA) teams to be aware that the mere presence of a pressure relief device does not necessarily constitute a valid...