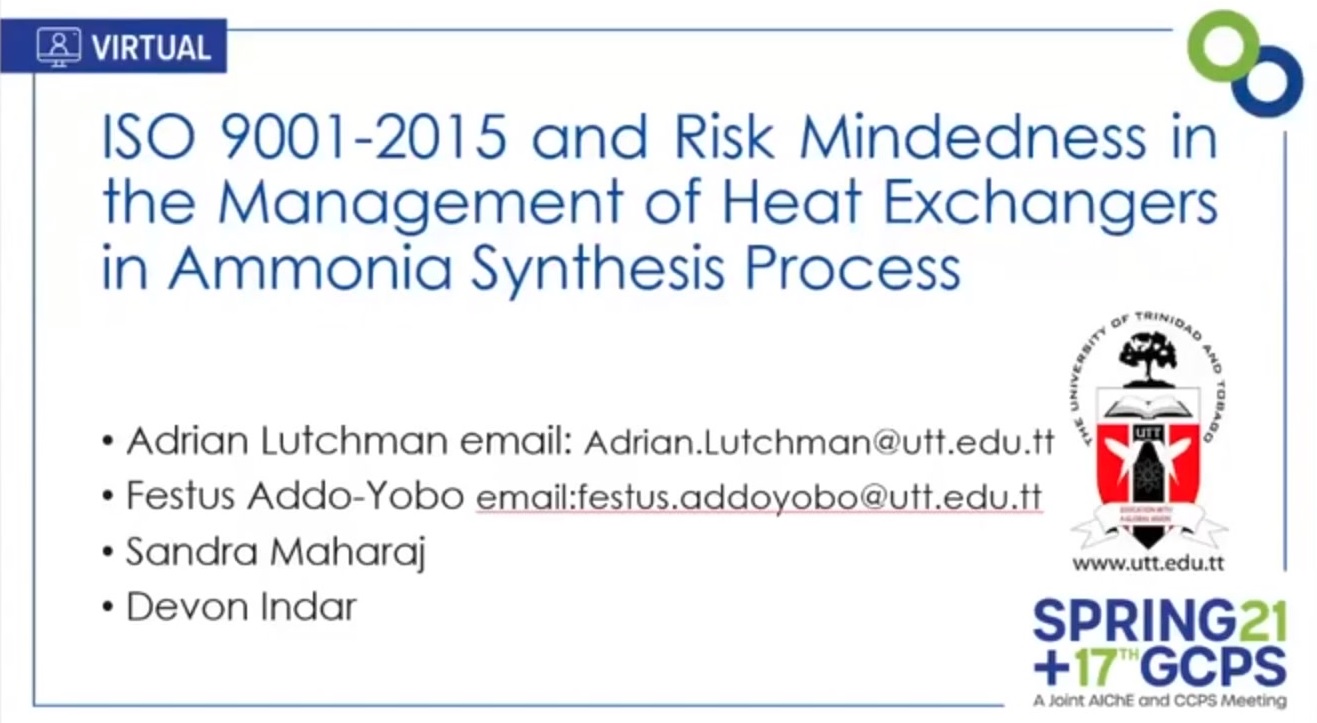 margin-left:0in;line-height:normal"> " arial>The Ammonia synthesis process is a series of
interconnected processes for which heat exchangers perform a critical function because
reaction is exothermic and heat removal is important. There is low conversion
per passage through the reactors due to equilibrium effects, refrigeration is
used to remove ammonia from gases before recycling unreacted feed gases back
into the reactors. The design has been optimized, however, there are issues
with plant reliability which require attention.

Thinning
of heat exchanger tubes due to erosion and corrosion cause them to break down
unpredictably leading to unplanned shut-down of plants thus reducing
productivity and reliability. The desired outcomes of plant performance
encompass: safety, operational efficiency, effectiveness, utilization of
resources and productivity. Therefore, tube thinning poses a risk to plant
operation. The revision of the ISO 9001 Standard to the 2015 version makes it a
requirement to address risk in all aspects of the Quality Management System
(QMS) and places the responsibility on top management. To meet these
requirements, Process Control Engineers must necessarily have conversations
with custodians of the QMS, in order to optimize the plant performance, whilst
minimizing risks and mitigating their impacts continually.

Our
research work on the ammonia process is focused on minimizing the impact and
frequency of tube failure. Heat exchanger thinning is a progressive process.
The risk factors underlying tube thinning are diverse and include: control of the
pH of Boiler Feed Water (BFW), the chemical composition of the steel, the
velocity of the cooling water and steam inside the tubes, the temperature in
the tubes, and the geometry of heat exchangers. In many cases, non-destructive
testing can identify tubes that have thinned significantly, which be blocked
off to avoid water leaking from them to the process stream. In this first paper
we use HYSYS to model the performance of the heat exchanger network used in a
KBR Ammonia Plant before and after heat exchanger tubes were blocked off. We
investigate numerically, the influence of three interacting process variables which
influence the risk of tube failure: BFW flowrate, process gas temperature, velocity
of steam-water mixture in the tubes, and use heuristics to create a map of the
risk posed to delivering desired process outcome.

The HYSYS
models cannot account for the presence of finned tubes, however we compensate
for their presence by taking account of increased surface area of finned tubes
without changing their resistance to heat transfer significantly.

The
analysis of the 3D flow of vapour-liquid cooling fluid in the tubes is modelled
by the control volume finite element method. Case studies in which the gas
flowrate and temperature are varied enabled us to determine the minimum BFW
flowrate required conform to manufacturer guidelines with respect to steam weight
(less than 30%).

The major
findings of this work are summarized in figure 1 to 5 below:

Figure 1
shows the predicted minimum flowrate of the BFW required as a function of process
gas flow presented as isotherms with process gas temperature as the parameter.
The quality of the steam is known to affect erosion rates and therefore their
prediction is also presented.

Plugging
of the tubes resulted in the following;

The
thermal and hydraulic characteristics inferred from the rigorous models with
special attention paid to the temperatures, vapour fractions and velocities in
123Cs before and after failure are shown in the table below. An increase in the
mean temperature difference (MTD) was observed and also an increase in the mean
tube side velocity and the maximum tube side velocity.

For all
datasets, most process parameters are within the acceptable regions for safe
operation, with the exceptions of the steam weight and the tubeside fluid
velocity experienced in a period prior to failure and after.

The steam
weight under these conditions was calculated to be 40.1% which is significantly
above the manufacturer’s operating limit of 30%. Thus, the potential for
thermal stress on the exchanger is predicted.

The
maximum tubeside velocity for the 123C2A was calculated to be 12.62 ft./s which
is above the recommended 8ft./s and very close to the maximum 13.1 ft./s. This
limit is specified by Tubular Heat Exchanger Manufacturer’s Association (TEMA)
for tubes that do not contain turbulators or any inserts.

It can be
seen from Figure 2 (design operating regime) that the steam weight in the
123C2A tubes are all below the recommended limit of 30%. Steam weight is
closely related to the velocity experienced on the tubeside, under these
conditions the tubeside velocity is 10.46 ft./s which although high, is still
below the TEMA limit.

In Figure
3 the 3-D analysis of the steam weight in the 123C2A tubes dataset show that
some tubes have a steam weight of greater than 40% with a maximum of 48%. The
resultant tubeside velocity reaches a maximum of 12.62 ft./s. This is a high-risk
operating regime.

After
plugging damaged tubes, it was found from the 3-D analysis of the steam weight
in the 123C2A tubes that the tubes have steam weight of greater than 35% and a
maximum of 38% (Figure 4). The resultant tubeside velocity reaches a maximum of
13.07 ft./s. Though the steam weight is lower than the previous dataset, the
tubeside velocity is higher due to the fact that the boiler feed water flowrate
is greater (331 klb/hr. vs 303klb/hr.). The higher boiler feed water flowrate
coupled with the higher-than-recommended steam weight is a matter of concern.

Based on
the 3-D analysis it is observed that the tubes on the exterior of the bundle
closer to the shellside inlet nozzle would be subject to a higher steam weight
and therefore may experience higher velocities. These tubes may be more likely
to fail due to erosion corrosion degradation.

The
maldistribution of heat duty is a major concern because the shell can get too
hot leading to dangerous thermal stresses.

The
increase in velocity through the tube side on a heat exchanger in the network,
is of greater concern. The maximum velocity determined within the bundle was
already close to the (TEMA), limit for two-phase flow. This limit is specified
for tubes that do not contain turbulators or any inserts. The increase in
velocity due to plugged tubes pushes the maximum velocity beyond the TEMA
guidelines. This deficiency in the TEMA specification poses additional risks
which requires addressing under the Standard.

Given
that the network’s overall thermal performance was only marginally affected by
the plugging of the tubes, there would be no need to change the operating
conditions to restore performance but rather to tackle maldistribution of the
heat load.

Several
mechanisms that affect tube life can occur simultaneously and involve the
following: high velocities inside the tube will lead to the turbulators coming
into contact with the interior surface and scraping off the corrosion inhibiting
layer to form suspended abrasive micro particles in the fast-moving steam-water
mixtures which further erodes the inhibitor layer as suggested by Levy, Yan,
& Patterson (1986). This leads further surface oxidation of the austenitic
steel at the operating temperatures and their subsequent removal thus
accelerating the thinning process.

Guidelines
for safe operation state that this layer should not be disturbed once formed as
other corrosion mechanisms can begin (Suez Water Technologies and Solutions,
2020).

margin-left:0in;line-height:normal"> " arial>HYSYS can be adapted to model heat exchanger
networks used in Ammonia Synthesis plants for the purpose of detecting risky
plant operating points assessing risk sources when defining a risk management
strategy for safe and productive operation of the plant. margin-left:0in;line-height:normal"> " arial>A requirement in the standard is that risk
management strategies should be iterative and dependent on outcome of actions
taken. That would suggest that in the operation of ammonia heat exchange
networks helpful measurements could include the analysis of cooling water for corro-erosion
products.

TEMA
should provide limits for two-phase flow in tubes with turbulators.

Risk-mindedness
in the Standard requires that finite element analysis of the thermal stresses
of the tube-shell geometry due to the maldistribution of heat load has to be
carried out. 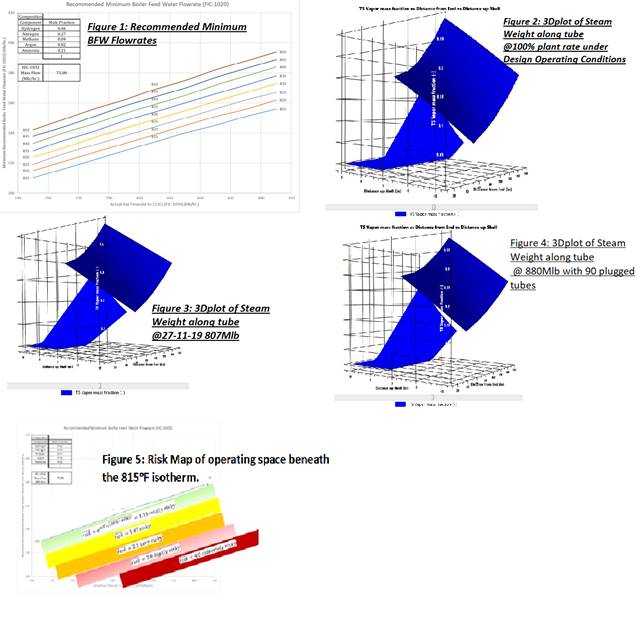 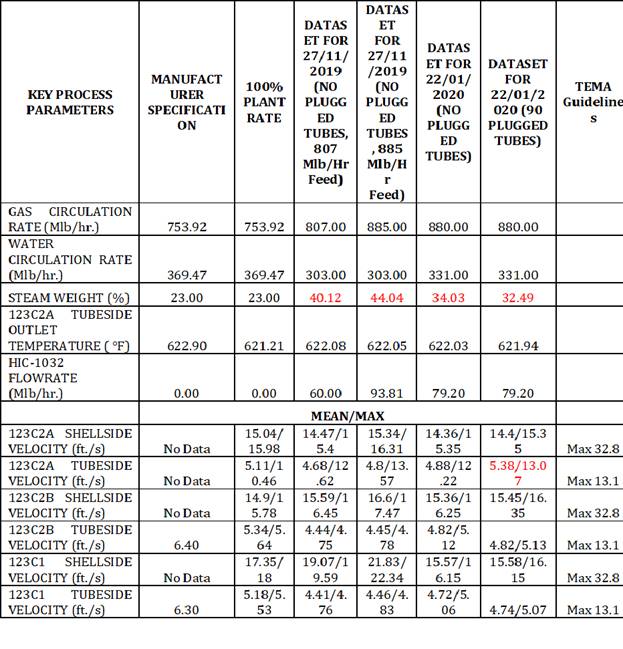 Preview Presentation:
Presenter(s):
Festus Addo-Yobo
Sandra Bissoon-Maharaj
Devon Indar
Adrian Lutchman
Once the content has been viewed and you have attested to it, you will be able to download and print a certificate for PDH credits. If you have already viewed this content, please click here to login.