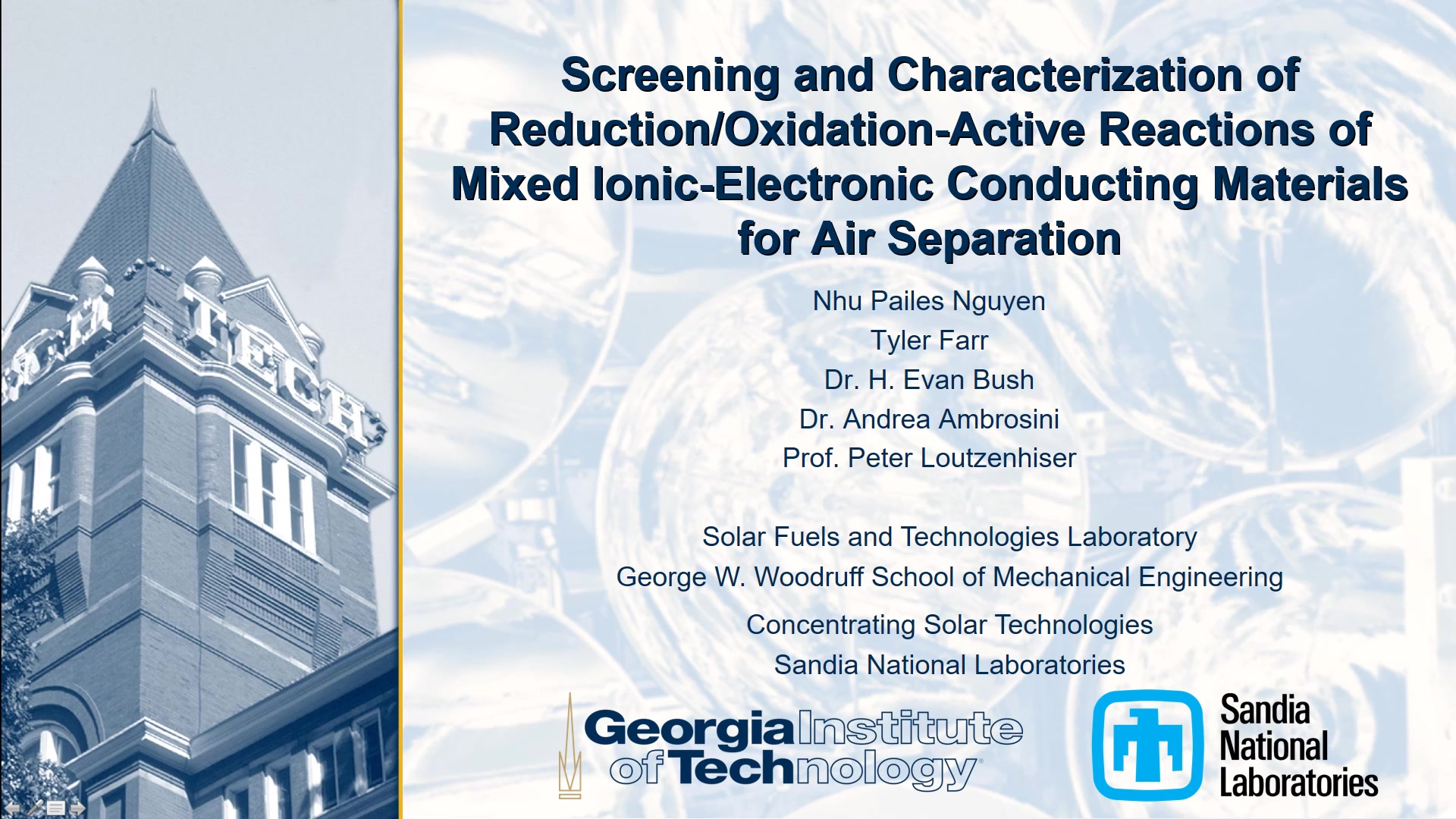 An investigation was performed on the impact of A- and B-site substitution on SrFeO3-Î´ reduction/oxidation (redox) extents. SrFeO3-Î´ is a promising oxygen carrier for thermochemical air separation due to considerable oxygen capacity and chemical stability across a range of temperature and oxygen partial pressures. A- and B-substitution may increase reducibility while preserving the phase stability of SrFeO3-Î´ [1,2]. Singly- and doubly-substituted Sr1-xAâ€™x Fe1-y Bâ€™yO3-Î´ (Aâ€™ = La, Ba, Ca; Bâ€™ = Co, Cr, Cu Mn), where x = 0 to 0.2 and y = 0 to 0.2, were synthesized using the sol-gel method [5] and screened based on their redox activity.

Redox activity screenings were performed via thermogravimetric analysis (TGA, Netzsch STA 449 F3 Jupiter) for a temperature range of 300 to 1200 Â°C, in 0 and 20% O2Â­/Ar. Changes in oxygen non-stoichiometry were quantified from measured mass losses to determine air separation capacity. Larger non-stoichiometry changes were seen in the A-sited doped samples. Of B-site substituents, only Co enhanced SrFeO3-Î´ reducibility. Most samples reduced continuously as temperature increased. The largest reduction extents were observed for Aâ€™= La and Ba. Samples with Aâ€™= Ca generally showed faster reduction kinetics under pure Ar; however, there was indication of a potentially reversible phase change around 850 Â°C.

Powder X-ray diffraction was performed on samples after synthesis and after TGA to verify phase stability. Scanning electron microscopy (SEM) and energy-dispersive X-ray spectroscopy (EDS) were performed on La0.1Sr0.9Â­FeO3-Î´ and Ba0.1Sr0.9Â­FeO3-Î´ to investigate particle morphology and elemental distribution before and after thermal reduction and oxidation cycling experiments. SEM showed some smoothing and rounding of particle surfaces after cycling, without significant changes in bulk characteristics and particle sizes. SEM revealed no particle sintering, while EDS showed no evidence of phase segregation in the samples, suggesting promising chemical stability after several thermal cycles.

Preview Presentation:
Presenter(s):
Andrea Ambrosini
H. Evan Bush
Tyler Farr
Peter Loutzenhiser
Nhu "Ty" Nguyen
Once the content has been viewed and you have attested to it, you will be able to download and print a certificate for PDH credits. If you have already viewed this content, please click here to login.

Oxidation Kinetics of Hercynite Alloys for Solar Thermochemical Fuel Production
Hydrogen (H 2 ) is a clean energy source that can replace fossil fuels in the transportation and power sectors, two of the largest contributors of...
Efficiency Limits of Underwater Solar Cells: An Excellent Application for Wide-Band-Gap Semiconductors?
Operation of underwater vehicles and autonomous systems is currently limited by the lack of long-lasting power sources. These systems could potentially be...