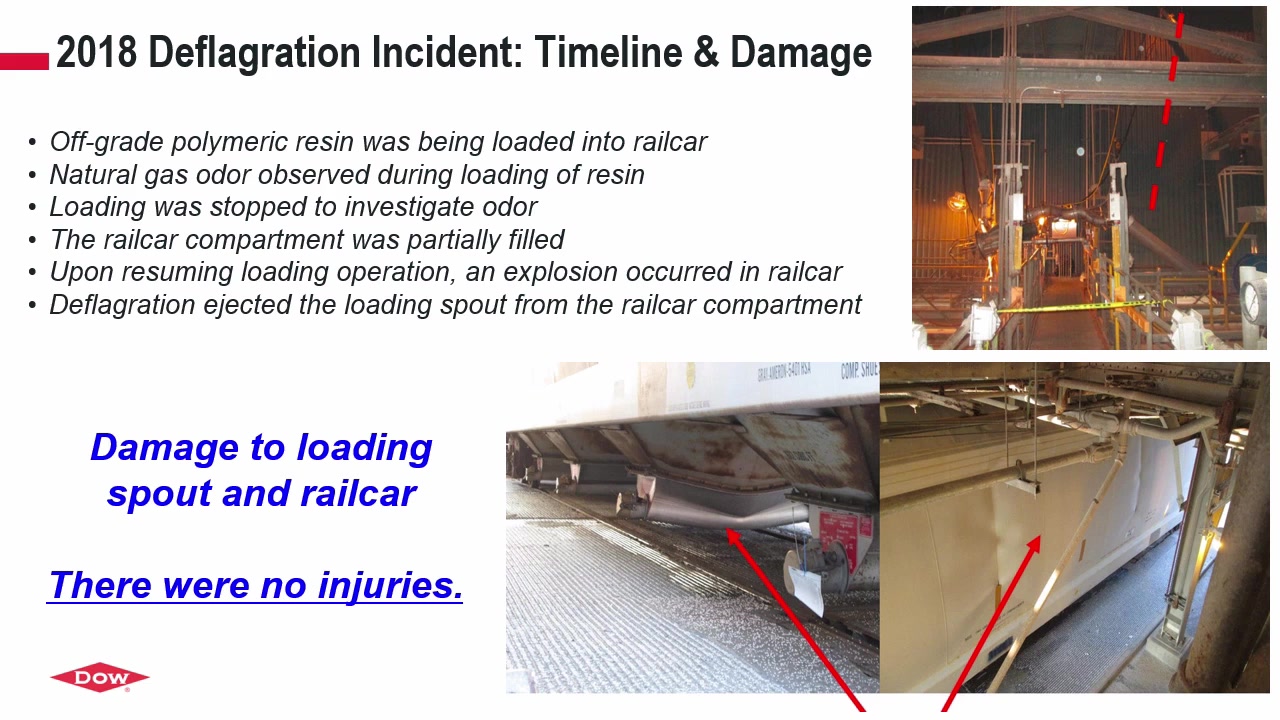 In 2018, a Process Safety incident occurred during loading
operations for a polymeric resin, resulting in a deflagration inside the
shipping container and an investigation was conducted to determine the cause of
the event. During the extrusion operation, an organic solid additive is added
to base polymer resin at ppm levels to protect resin quality at elevated
temperatures, and some additive degradation is expected. After the event, it
was learned that a zone of the extruder had reached a higher-than-normal
temperature shortly before the event, although it was unclear at the time
whether this observation was connected to the event. Through the application of
laboratory-scale thermo-analytical testing, it was subsequently determined that
the higher operating temperature resulted in a higher percentage of additive
decomposition than had been expected, creating the conditions that led to the
event. Despite the maturity of this technology, the potential to accumulate a
sufficient quantity of flammable additive degradation components during a
non-routine operating mode had not been previously identified as a potential
hazard scenario.

This paper will illustrate how reactive chemicals knowledge
was combined with analytical expertise to determine the cause of the event.
This investigative work included the use of Thermogravimetric Analysis (TGA) as
well as an innovative adiabatic Accelerating Rate Calorimetry (ARC) unit
coupled to an online gas chromatograph/mass spectrometer (GC/MS). As a result
of this reactive chemicals evaluation and design of key experiments, the root
cause of the event was identified, enabling stakeholders to define mitigations
that would permit safe return to operations and prevent a future reoccurrence.

Preview Presentation:
Presenter(s):
Katie Mulligan
Once the content has been viewed and you have attested to it, you will be able to download and print a certificate for PDH credits. If you have already viewed this content, please click here to login.

Pressure Relief Systems Effluent Handling
Collection, disposal, and treatment systems are an integral part of pressure relief systems for minimizing potential hazards posed by the effluent from...
LOPA and Human Reliability – Human Errors and Human IPLs
Layer of Protection Analysis (LOPA) is a simplified risk assessment method that provides an order of magnitude estimate of the risk of a potential accident...