Investigation of the Adsorbed Species of CO2 on Mg(OH)2 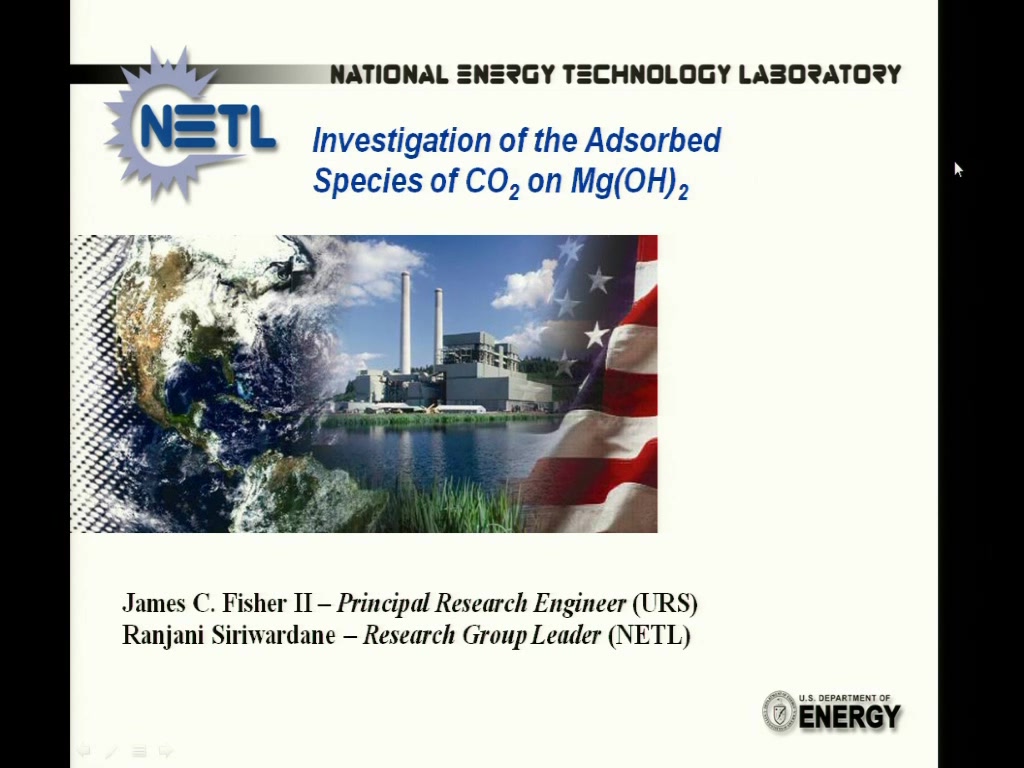 Fossil fuels supply a majority of the world's energy needs. However, the combustion of fossil fuels is one of the major sources of the greenhouse gas CO2. Integrated gasification combined cycle (IGCC) is one the most efficient power generation systems that use coal. However, because the IGCC gas streams are at high pressure and elevated temperatures, there is a thermal efficiency loss if the fuel gas stream is cooled for CO2 removal. The current commercial technologies, such as the Selexol process, require cooling of the gases to near ambient temperature for water and CO2 removal. There are tremendous advantages of developing technologies for CO2 capture at moderate/hot gas temperatures. One advantage is that the moderate/hot fuel gas after CO2 removal can be directly introduced to the turbine systems for power generation were as the Selexol process requires the fuel gas to be reheated after low temperature capture. IGCC systems with CO2 removal would be more energy efficient if the sorbents were operational at warm gas temperatures (i.e. 150 to 350 °C). Further, successful development of such a CO2 capture sorbent would enable the use of other warm gas clean up technologies such as HCl and H2S. Although warm gas clean up removal processes are expected to increase the overall efficiency of the IGCC process significantly, only a few studies related to regenerable sorbents with sufficient CO2 removal capacity at 150 to 350 °C are reported in the literature.

A novel magnesium hydroxide-based sorbent that can capture CO2 from 200 to 315 °C was developed and patented by NETL researchers.[1-2] The sorbent is also regenerable at 375-400 °C.  The capture process with this novel warm gas CO2 removal sorbent involves a chemical reaction, as shown in Reaction 1 below.  Mg(OH)2 has a very high CO2 sorption capacity at 200?315 °C which is considerably higher than that of the commercial Selexol process.  The capture reaction/process will be referred to as ?sorption.?

The carbonate formed during the reaction will thermally decompose to release carbon dioxide and regenerate according to Reaction 2 at 375?400 °C.

Reaction 2 may also occur in two reaction steps as shown in Reactions 3 and 4:

The Mg(OH)2-based sorbent contains a mixture of Mg(OH)2, bentonite binder, and a promoter, the detailed synthesis has been described elsewhere.[2]  This sorbent powder was formed into 1-2 mm pellets by combining with water followed by drying at 150 °C for 4 hours.  The pellets were then ground into a powder and placed in a high pressure, high temperature FTIR-DRIFTS reactor (Thermo Fisher - Nicolet).  The reactor was purged with N2 that flowed through a saturator at 50 sccm.  The saturator provided approximately 4% H2O water to the gas flow.  After purging for 30 minutes, the pressure was set to 280 psig and the reactor was heated to 425 °C to clean the sorbent for 2 hours.  The clean sorbent was cooled to 200 °C for 2 hours while flowing hydrated N2 to rehydrate the sorbent per Reaction 4.  The hydrated sorbent was then exposed to 5% in CO2 in hydrated N2 for 12 hours.  The FTIR was set to series mode to scan the sorbent through the entire capture cycle.

Pellets of 1-2 mm were placed in a bench-scale, packed-bed reactor (0.5 inch inner diameter) to form a 6 inch bed.  The sorbent bed was then heated to 200 °C and exposed to the capture gas consisting of 28% CO2, 28% Ar, 10% H2O, and 34% N2 gas mixture flowed downward with gas hourly space velocity (GHSV) of 250 hr-1.  The capture was complete when the CO2 concentration of the outlet matched the inlet.  After the capture was complete, the sorbent was regenerated to remove the captured CO2.  Regeneration occurred by flowing 10% H2O with 90% N2 at 500 hr-1 GHSV through the reactor maintained at 375 °C until CO2 was no longer present in the effluent as determined by a mass spectrometer.  Upon finishing the regeneration, the reactor was cooled to 200 °C and a mixture of 20% H2O in N2 was introduced for 2 hours to hydroxylate the remaining MgO into Mg(OH)2.  After hydroxylation, the CO2 capture gas stream was introduced and subsequent capture cycles were conducted.

Figures 1 and 2 show FTIR spectra during CO2 sorption over the Mg(OH)2 sorbent.  The spectra are in absorbance form where the single beam spectra collected immediately before the CO2 introduction was used as the background.  In absorbance form, species with a positive rate of formation are shown with a positive IR band while species with negative rates of formation are shown with negative IR bands. As Reaction 1 proceeds, the carbonates in Figure 1 are shown increasing while the hydroxyl groups shown in Figure 2 are decreasing.

Figure 3 shows the MS profile of CO2 during a capture over Mg(OH)2 sorbent.  The initial capture shows that nearly 90% of the CO2 was captured.  After 15 minutes of CO2 exposure, the rate of CO2 capture decreased to about 15% of the CO2 flow.  Comparing this profile to the IR data suggests the initial capture was the result of the formation of both bridged and bidentate carbonates.  The lower rate of capture in the bench scale reactor may correlate to the formation of the bidentate formation. In addition, powders were used in FTIR while pellets were used in reactor tests. Diffusional resistance through the product layer and pores in the pellets may also contribute to the lower rates with increasing time.

2.Siriwardane, R. V., Regenerable Sorbents for CO2 Capture From Moderate and High Temperature Gas Streams. 2008, The United States of America as represented by the United States Department of Energy.

Preview Presentation:
Presenter(s):
James C. Fisher
Once the content has been viewed and you have attested to it, you will be able to download and print a certificate for PDH credits. If you have already viewed this content, please click here to login.

Building on History: Pathways to Energy Independence and Sustainability through Gasification and Sequestration
We will discuss a history of Industrial gas usage and how they helped shape the fuels and petrochemicals Industries. A look at the ftutre of IG in F&PD...
Assessing the Role of Thermal Stresses in Caprock Integrity During CO2 Storage
Deep saline aquifers provide unbeatable capacities for long term CO 2 storage, provided CO 2 does not leak. Upon CO 2 injection the pressure in the aquifer...