Introduction and Biomass Supply and Cost - Transportation Fuels from Coal and Biomass: Review of an NRC Report | AIChE
Skip to main content

Introduction and Biomass Supply and Cost - Transportation Fuels from Coal and Biomass: Review of an NRC Report 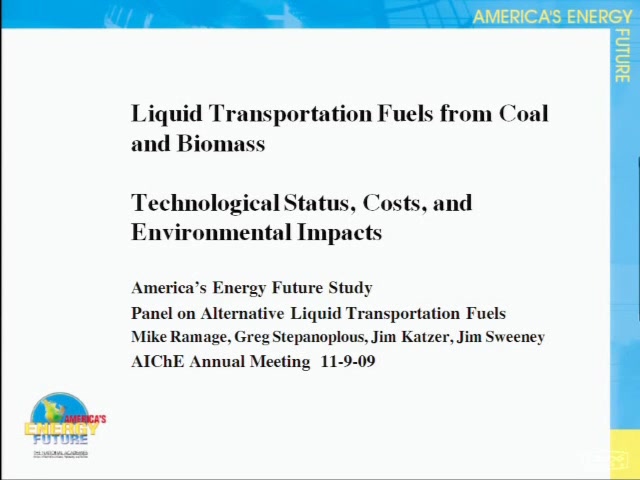 The U.S. transportation sector consumes about 14 million barrels of oil per day, 9 million of which are used in light-duty vehicles. Total U.S. oil consumption is 20 million barrels per day, 12 million of which are imported. The nation can reduce its dependence on imported oil, increase its energy security, and potentially reduce greenhouse-gas emissions by producing alternative liquid transportation fuels from domestically available resources to replace gasoline and diesel. Two abundant domestic resources with potential for producing liquid fuels are biomass and coal. Although abundant supplies of biomass and coal can be produced, each resource has its own set of limitations and challenges. Unlike liquid fuels from biomass, liquid fuels from coal cannot, even with the use of carbon capture and storage, offer any greenhouse-gas benefit relative to gasoline. However, liquid fuels from coal are probably less expensive than those from biomass unless the costs of greenhouse-gas emissions are included. A robust set of conversion technologies needs to be developed or demonstrated immediately and driven to commercial readiness to enable the use of the abundant biomass and coal in the development of suitable liquid transportation fuels. This report of the America's Energy Future Panel on Alternative Liquid Transportation Fuels addresses technological readiness for producing liquid fuels from coal and biomass, their life-cycle costs, and environmental impacts.

The United States has at least 20 years' worth of coal reserves in active mines and probably sufficient resources to meet the nation's needs for well over 100 years at current rates of consumption. In contrast, biomass can be produced continuously over a long term if managed sustainably, but the amount that can be produced in a given period is limited by the natural resources required to support biomass production. Given that production of corn requires large amounts of fertilizer and that corn grain is also an important source of food and feed, the panel regards corn-grain ethanol as a transition to cellulosic biofuels or other biomass-based liquid hydrocarbon fuels, such as biobutanol and algal biodiesel. Cellulosic biomass—obtained from dedicated fuel crops, agricultural and forestry residues, and municipal solid wastes—could potentially be sustainably produced at about 400 million dry tons per year with today's technology and agricultural practices and with minimal adverse impacts on U.S. food and fiber production or on the environment. A key assumption underlying that estimate is that dedicated fuel crops will be grown on idle agricultural land in the U.S. Department of Agriculture's Conservation Reserve Program. By 2020, the amount of sustainably produced biomass could reach 550 million dry tons per year.

Ensuring a sustainable biomass supply requires that the resource base be assessed systematically to address multiple environmental, public, and private sector concerns simultaneously. Producers will probably need additional incentives to grow biofeedstocks so as to avoid direct and indirect competition with the food supply and also to avoid land-use practices that add substantially to net greenhouse-gas emissions. Appropriate incentives can encourage sustainable approaches to the production of lignocellulosic biomass.

Technology for biochemical conversion of the starch in grains to ethanol has been deployed commercially. Although grain-based ethanol has been important for initiating public awareness and the development of industrial infrastructure for fuel ethanol, cellulosic ethanol and other advanced cellulosic biofuels have much greater potential for reducing U.S. oil use and greenhouse-gas emissions without affecting the food supply and costs. Processes for biochemical conversion of cellulosic biomass to ethanol are in the early stages of commercial development, and process improvements are expected over the next decade from evolutionary improvements through commercial experience and from economies of scale as production becomes more widespread and expands to an optimal size. The panel estimated that incremental improvements in biochemical conversion technologies can be expected to reduce nonfeedstock process costs by about 25 percent by 2020 and by 40 percent by 2035. An expanded distribution infrastructure will be required because ethanol cannot be transported in the pipelines used to transport petroleum. Studies should be conducted to identify the infrastructure needed to accommodate increasing volumes of ethanol and to identify and address the challenges of distributing and integrating larger volumes into the fuel system. Research on biochemical pathways for converting biomass to fuels that are more compatible with the current distribution infrastructure could lead to the development of relevant technologies over the next 10-15 years.

If all necessary conversion and distribution infrastructure is in place, 550 million dry tons of biomass can in theory be used to produce up to 30 billion gallons of gasoline-equivalent fuels. However, potential supply does not translate to actual fuel supply. When the production of corn-grain ethanol was commercialized, U.S. production capacity grew by 25 percent each year over a 6-year period. Assuming that the rate of building cellulosic-ethanol plants exceeds that of corn-grain-ethanol plants by 100 percent, alternative fuels could be added to the U.S. fuel portfolio at a rate of up to 0.5 million barrels of gasoline equivalent per day by 2020 (1 bbl of oil yields about 0.85 bbl of gasoline and diesel). By 2035, up to 1.7 million barrels per day could be produced in this manner, leading to about a 20 percent reduction in oil used for light-duty transportation at current consumption levels.

Technologies for the indirect liquefaction of coal to transportation fuels (gasification with Fischer-Tropsch or a methanol-to-gasoline process) without geologic carbon dioxide (CO2) storage are commercially deployable today, but CO2 life-cycle emission will be more than twice that of petroleum-based fuels. Requiring geologic CO2 storage with these processes would have a relatively small effect on engineering costs and efficiency. However, the viability of geologic CO2 storage has yet to be adequately demonstrated on a large scale in the United States, and unanticipated costs could occur.

Liquid fuels produced from thermochemical plants that use only biomass feedstock are more expensive than fuels produced from coal but can have CO2 life-cycle emission that is close to zero without geologic CO2 storage or is highly negative with effective geologic CO2 storage. To make such fuels competitive, the economic incentive for reducing CO2 emission has to be sufficiently high. Gasification of biomass and coal together to produce liquid fuels allows operation on a larger scale than would be possible with biomass only and reduces capital costs per unit of capacity. When biomass and coal undergo thermochemical conversion together, overall CO2 life-cycle emission is lower than that from coal because the CO2 emission from the coal is countered by the CO2 uptake by biomass during its growth. If 550 million tons of biomass are combined with coal (60 percent coal and 40 percent biomass on an energy basis), production of 4 million barrels per day (60 billion gallons per year) of gasoline equivalent is technically feasible. That amount of fuel represents about 45 percent of the current volume of liquid fuels used annually for light-duty vehicles in the transportation sector. Conversion of combined coal and biomass to liquid fuels at that ratio without geologic CO2 storage yields CO2 life-cycle emission similar to that of gasoline; with geologic CO2 storage, it yields close to zero CO2 life-cycle emission. A program of aggressive support for establishment of first-mover commercial coal-to-liquid transportation-fuel plants and coal-and-biomass-to-liquid transportation-fuel plants with integrated geologic CO2 storage will have to be undertaken immediately if commercial plants are to be deployed by 2020 to address U.S. energy security concerns and to provide fuels whose levels of greenhouse-gas emissions are similar to or less than that of petroleum-based fuels.

For thermochemical conversion of coal or combined coal and biomass, the viability of geologic CO2 storage is critical for commercial implementation. Large-scale demonstration and establishment of regulatory procedures have to be pursued aggressively in the next few years if thermochemical conversion of biomass and coal with geologic CO2 storage is to be ready for commercial deployment in 2020 or sooner. The federal government should continue to partner with industry and independent researchers to determine the costs, safety, and effectiveness of geologic CO2 storage on a commercial scale. If such demonstrations are initiated immediately and geologic CO2 storage is proved viable and safe by 2015, the first commercial plants could be operational in 2020. Combined coal-and-biomass-to-liquid plants will have one-fifth the output of a nominal 50,000-bbl/day coal plant and will probably be sited in regions near coal and biomass supplies, and so buildout rates will be lower than those for the cellulosic-ethanol plants discussed above. The panel estimates that at a growth rate of 20 percent until 2035, 2.5 million barrels of gasoline equivalent would be produced per day in combined coal and biomass plants. Production at that level would consume about 300 million dry tons of biomass—less than the projected biomass availability—and about 250 million tons of coal per year.

Because of the vast coal resources in the United States, the actual supply of coal-to-liquid fuel will be limited not by feedstock availability but rather by market penetration. At a build rate of two to three plants per year, up to 3 million barrels of gasoline equivalent could be produced per day by 2035. Production at that level would consume about 580 million tons of coal per year. However, issues related to an increase in coal mining by 50 percent need to be considered. At a build rate of three plants starting up per year, five to six plants would be under construction at any time.

Integrated geologic CO2 storage is key to producing liquid fuels from coal with greenhouse-gas life-cycle emissions comparable to those of gasoline. Commercial demonstrations of coal-to-liquid and coal-and-biomass-to-liquid fuel conversion technologies with integrated geologic CO2 storage should proceed immediately if the goal is to deploy commercial plants by 2020. Detailed scenarios for market penetration of U.S. biofuels and coal-to-liquid fuels should be developed to clarify the hurdles and challenges facing full feedstock use and to establish the enduring policies required. Current government and industry programs should be evaluated to determine whether emerging biomass and coal conversion technologies can further reduce U.S. oil consumption and greenhouse-gas emissions over the next decade."

Preview Presentation:
Presenter(s):
Mike Ramage
Once the content has been viewed and you have attested to it, you will be able to download and print a certificate for PDH credits. If you have already viewed this content, please click here to login.