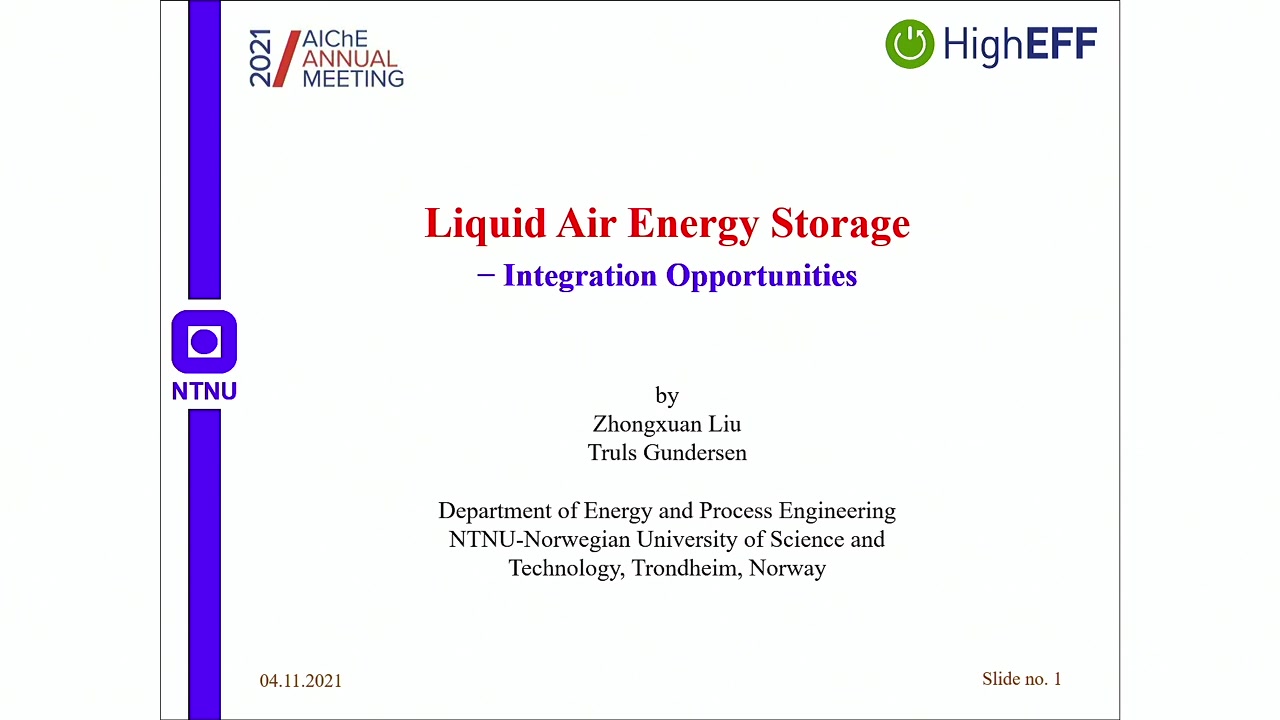 With the development of exploiting renewable energy sources, it is predicted that the share of renewable energies will be 40% in 2030 (British Petroleum, 2019). One major concern related to energy systems with such a high percentage of renewable energies is stability in the power grid. The most well-known renewable energies beyond hydroelectric power are solar and wind energies. However, the intermittent nature of these energies cannot guarantee a stable energy supply. Energy storage could be an efficient method to handle this issue. Surplus energy or unstable renewable energy will be collected and stored in different forms (such as thermal energy, mechanical energy and chemical energy). The stored energy can be directly used or be converted to electricity for other purposes. Among several energy storage technologies, liquid air energy storage (LAES) has certain advantages compared to other technologies, such as being geographically unconstrained, having high energy density and low maintenance and operational costs. A standalone liquid air energy storage consists of three sub-processes: charging, storing and discharging (see Figure 1). Air is compressed by using surplus energy in the form of power, and the compression heat is transferred to a suitable fluid that is sent to a hot thermal energy storage. The compressed air is then cooled by the cold energy from air regasification in the discharging process. The liquid air, which can be kept for months, is stored in cryogenic tanks at atmospheric pressure. When energy is in demand, the liquid air is pumped, regasified by exchanging heat with the cold thermal energy storage, preheated by the fluid from the hot thermal energy storage, and finally being sent to expanders for generating power. A configuration of the LAES system proposed by Guizzi et.al (2015) with hot and cold thermal energy storages has a round-trip efficiency (RTE) of 54.4%. RTE is defined as the ratio between the power generated in the discharging process and the power consumed in the charging process.

However, the LAES technology has not been widely adopted, partly due to its low round-trip efficiency. In a standalone LAES system, the liquid yield is in the range of 70-85%, which means that 15-30% of the air is recycled back to the charging process and thereby the compression work is increased. Thus, integration of the LAES with external cold thermal energy should be considered to increase the liquid yield and improve the performance of the LAES. In addition, integration of the LAES discharging part with external waste heat will increase the work production in the expanders, and this is also discussed here. Our group has also studied optimization opportunities for the stand-alone LAES system, and an improvement in RTE from 54.4% to 63.8% has been realized and is reported in a separate presentation.

Integration of the LAES system with an LNG regasification process

LNG carries a considerable amount of cold energy (or exergy) at -162°C. Due to the increasing demand for natural gas (NG), the global LNG capacity was increased to 821 million tons per annum (MTPA) in February 2020 (IGU, 2020). However, cold energy from the regasification of LNG is wasted to environment (air or seawater) in conventional LNG terminals. In recent years, there has been considerable research related to the utilization of LNG cold energy in other processes, such as cold food storage, low-temperature CO2 capture, air separation (Kim et al., 2018) and cryogenic power generation processes (Sung, 2017, Yu et al., 2021). Khor et al. (2018) discussed various applications of LNG cold energy beyond power cycles.

When surplus power is available, the LAES charging process is started. LNG is first pumped to a high pressure, and then sent to the LAES system, where its cold energy is utilized in two distinct places. LNG cold regasification energy is first utilized in the cold box and thereafter used to precool air in the compression part. During these steps, LNG is heated and becomes gaseous high-pressure NG. The high-pressure NG is next sent to the direct expansion part to generate power. The air is compressed and cooled by the cold regasification energy from both LNG and liquid air. When power is demanded, the power production of the integrated system comes from both the liquid air and LNG. The liquid air is pumped, regasified and depressurized through expanders to produce power. To further improve the system, the regasified air can be heated by an Organic Rankine Cycle (ORC), where the temperature difference between the ambient air and regasified air is used to generate power, before the heated air is being sent to the expansion part. In discharging mode (without the need for external cold energy), pumped LNG is regasified by an ORC and then sent to the direct expansion part to produce power.

By combining the LNG regasification process with the LAES system, the compression work in the LAES is reduced due to the decreased inlet temperature of air to the compressors. Thus, the round-trip efficiency has been improved from 62.4% to 106.2% since extra power is generated from the â€œfree LNG cold energyâ€. Of course, having an RTE above 100% must be seen as an effect of utilizing an external cold resource that otherwise would be wasted to the environment. A more objective measure of the performance of the integrated system is to use exergy analysis. The exergy efficiency based on physical (or thermomechanical) exergies of the inlet and outlet streams as well as power consumption/production in the integrated system, is calculated to be 67.9%.

Integration of the LAES system with available external waste heat

Table 1. Improvements in RTE for different integration opportunities for the LAES system.

Figure 1. Basic LAES before integration with external heating and cooling.

Preview Presentation:
Presenter(s):
Truls Gundersen
Zhongxuan Liu
Once the content has been viewed and you have attested to it, you will be able to download and print a certificate for PDH credits. If you have already viewed this content, please click here to login.