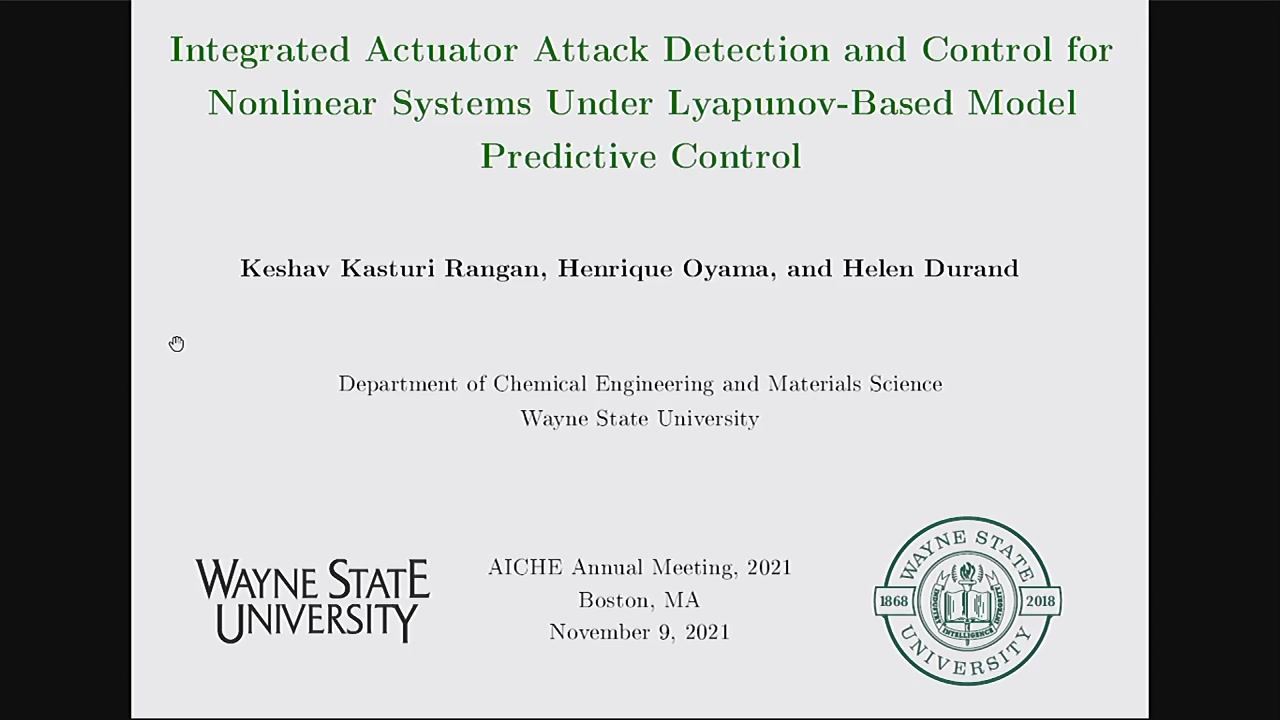 With the impetus that Industry 4.0 [1, 2] has received, especially over the last decade, many industries are moving toward greater integration of physical processes and sensor measurements with computer and communication systems. While this development of integrated cyber-physical systems (CPS) has advantages like increased production efficiency and transparency of the various steps involved in production, it also makes the processes vulnerable to malicious cyberattacks. Cyberattacks can cause major issues with guaranteeing safety of process systems and have hence motivated multiple projects which account for attacks on process sensors [4, 5, 6] and process actuators [7, 8]. Recent work in our group has developed strategies for handling cyberattacks on process sensor measurements with theoretical guarantees for nonlinear dynamic systems in the context of an advanced optimization-based control framework known as Lyapunov-based economic model predictive control (LEMPC) [3]. For example, [5] explored three strategies for attempting to detect attacks on the sensors which involved probing for attacks by modifying the control law over time to drive the closed-loop state toward different operating points in state-space if there is no sensor measurement cyberattack (failure of the state measurements to approach these auxiliary operating points could signify a sensor measurement attack), to compare state predictions with state measurements and flag an attack if these are not sufficiently close to one another, and to compare redundant state estimates with one another and flag an attack if these are not sufficiently close to one another. [4] extended these strategies to the case that the process dynamics change over time. Despite the theoretical guarantees which can be made for these detection strategies in the presence of sensor measurement attacks, they are not theoretically guaranteed to handle attacks on the controller codes, controller-to-actuator communication links, or directly on the process actuators, consequently making any any response to such threats unclear.

Motivated by these considerations, this work seeks to explore how integrated attack detection and control strategies using LEMPC might be developed to handle actuator attacks, as well as simultaneous actuator and sensor attacks. To explore techniques for handling actuator attacks, initially, the utility of the three detection strategies from [5] is explored when the actuators are attacked, with updates to the strategies as necessary. It is demonstrated, for example, that while the probing-based strategy from [5] lacks an ability to conclusively identify attacks on the sensors, a similar strategy is able to ensure closed-loop stability under actuator attacks that are not flagged under sufficient conditions. In contrast, the state estimation strategy from [5] may have difficulty in flagging actuator attacks if the estimates are not impacted by a falsified control action. In addition to extending the attack detection strategies from [5] to the actuator attack case, we also introduce concepts for handling actuator attacks based on checking whether a metric which would signify stability under normal operation (e.g., the Lyapunov function developed around the operating steady-state) is meeting requirements (e.g., decreasing over time), or developing redundant controllers to cross-check control actions received at the actuator. After developing these strategies, we discuss concepts for combining the sensor and actuator attack detection methods, with consideration for the types of guarantees which can be made in this scenario. A chemical process example consisting of a continuous stirred tank reactor is used to illustrate the developments.

Preview Presentation:
Presenter(s):
Helen Durand
Henrique Oyama
Keshav Kasturi Rangan
Once the content has been viewed and you have attested to it, you will be able to download and print a certificate for PDH credits. If you have already viewed this content, please click here to login.