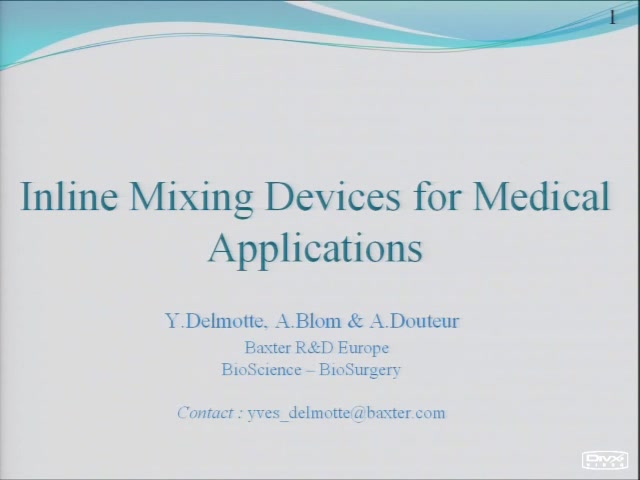 In the surgical field, the mixing of two combined fluid streams is required to form fibrin glue, used as a tissue sealant or a hemostat. The sealant components, fibrinogen and thrombin, have different viscosities, respectively 150 and 1 cps at 37°C. The viscosity of fibrinogen depends on the temperature and dramatically increases when the temperature decreases. The instructions for use recommend warming the two components to 37°C to facilitate their mixing. Using these two components at a temperature below 37°C makes complete and thorough mixing more difficult, therefore reducing the efficacy of the sealant to seal or bind tissue.

We developed a mixing device that allows Inline mixing of equal volumes of fibrinogen and thrombin. Tank mixing of the two components is not possible as polymerization occurs as soon as they are in contact with each other. Indeed, thrombin catalyzes the conversion of fibrinogen into fibrin and the kinetic rate depends on its concentration - the higher the thrombin concentration used, the faster the conversion into fibrin occurs.

The Inline mixing device is constituted of a plastic molded housing containing 1 or 2 discs of porous material. The disc has a diameter of 3.5 mm, a thickness of 1.5 mm and is made of sintered polypropylene. The disc is characterized by a pore size ranging from 10 µm to 130 um. The housing is equipped with ISO female and male luer ends to allow connection with the ancillaries of the fibrin glue kit. The porous material used can be metal, glass, ceramic or polymers.

The quality of the fibrin material coming out of the mixing device has been evaluated by measuring the percentage of á chains inside the fibrin formed 30 minutes after mixing the fibrinogen and thrombin. we observed that:

1) Mixing with our device is not dependent on the temperature of the two components, respectively fibrinogen and thrombin. The mixing device works as well at 4°C 18°C, 22°C, and 26°C as it does at 37°C.

2) Mixing with our device is not dependent on the low flow rate of the two components, respectively fibrinogen and thrombin. The mixing device works as well at 4ml/min, 8ml/min or 12ml/min. These are the extreme flow rates used by a surgeon to apply fibrin glue in an operating room.

3) A device made of two discs mixes better than with 1 disc made of the same material and in a similar housing. Both are far better than the control. It seems that, for our application, the distance between the two discs plays an important role in the quality of the fibrin obtained.

In our application, ultrasonic welding is used for the assembly of the different parts but they could be press-fitted into a cavity, depending on the device design.

The porous material discs are tool cut but they can be laser or ultrasound cut.

The porous discs remain static during the mixing.

The design and configuration of the inline mixing device is optimized for mixing fibrinogen and thrombin for a particular surgical application. The dimensions, shape, porosity, material, conditions of use, etc. are not limited to those described in this application.&'

Preview Presentation:
Presenter(s):
Yves Delmotte
Once the content has been viewed and you have attested to it, you will be able to download and print a certificate for PDH credits. If you have already viewed this content, please click here to login.

Process Development and Manufacturing: Single Use Versus Glass and Stainless Steel
Single-use equipments are now commonly used for process development and production activities. The advantages of these equipments have been well demonstrated...
Modelling of an Industrial Trickle Bed Reactor for Mapd Selective Hydrogenation with CFD Assistance
Nowadays, propylene is the second most important petrochemical monomer, close to 70 million of tons are produced annually. The conventional naphtha steam...