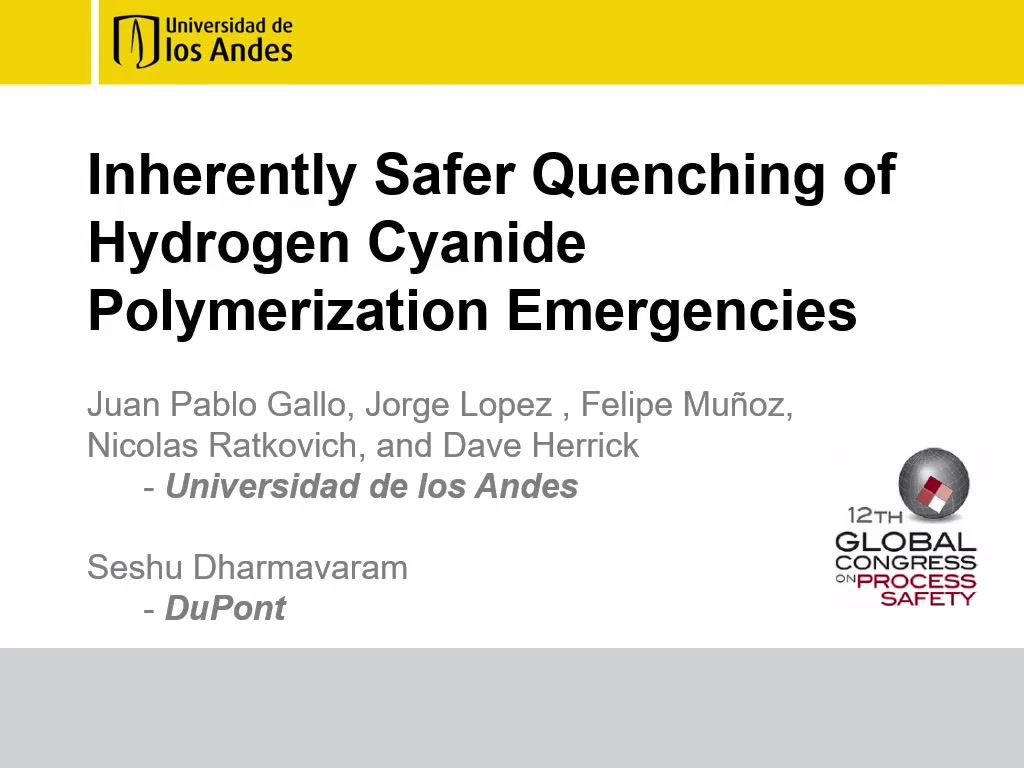 Hydrogen Cyanide (HCN) product is stored in tanks at many production facilities.  It is capable of self-reaction that could end in explosive polymerization if safeguards are not maintained.  An explosion of a large storage tank could cause damage in a radius of several hundred meters, potentially causing fatalities, equipment damage, and significant restriction to the industry’s right to operate.  One of the last lines of defense against such an event is the addition of acid to “quench” the polymerization reaction.  Many sites that store HCN use sulfuric acid to quench polymerization, but over-addition of this acid has the additional hazard of explosion by a hydrolysis reaction.

Two methods of mixing are investigated.  The first is addition of a small quantity of acid into a tank.  The velocity of the HCN in the tank in this case is very small (on the order of centimeters per second).  The second method is to inject a small flow of acid into the circulating line on the tank.  In this case, the velocities are much higher (on the order of meters per second).

The first part of the work involves modeling to compare mixing of phosphoric and sulfuric acid.  This will provide a fundamental comparison between the two acids, and also between the two mixing methods.  The second part will involve experimental comparisons of mixing of the two acids with acetonitrile.  The use of acetonitrile as a less-toxic substitute for HCN will greatly simplify experimentation while providing a liquid with similar density, viscosity, and chemical properties as HCN.  Both mixing methods will be tested experimentally as well.

Mixing equipment used in this work should be relatively easy to scale up to industrial facilities.  Mixing data provided by this study could be used for the design of new HCN storage tanks or new quenching systems on existing HCN storage tanks.

Preview Presentation:
Presenter(s):
David E. Herrick
Once the content has been viewed and you have attested to it, you will be able to download and print a certificate for PDH credits. If you have already viewed this content, please click here to login.

Fundamentals of Laminar Mixing and Applications
Do you know how to characterize a mixing system for power and blend time? Determine the best geometry for required mixing conditions or product specifications...
Case Histories and Lessons Learned
Reviews of process safety incidents and near misses provide valuable learning opportunities. Papers dealing with incidents, near misses, and the lessons...