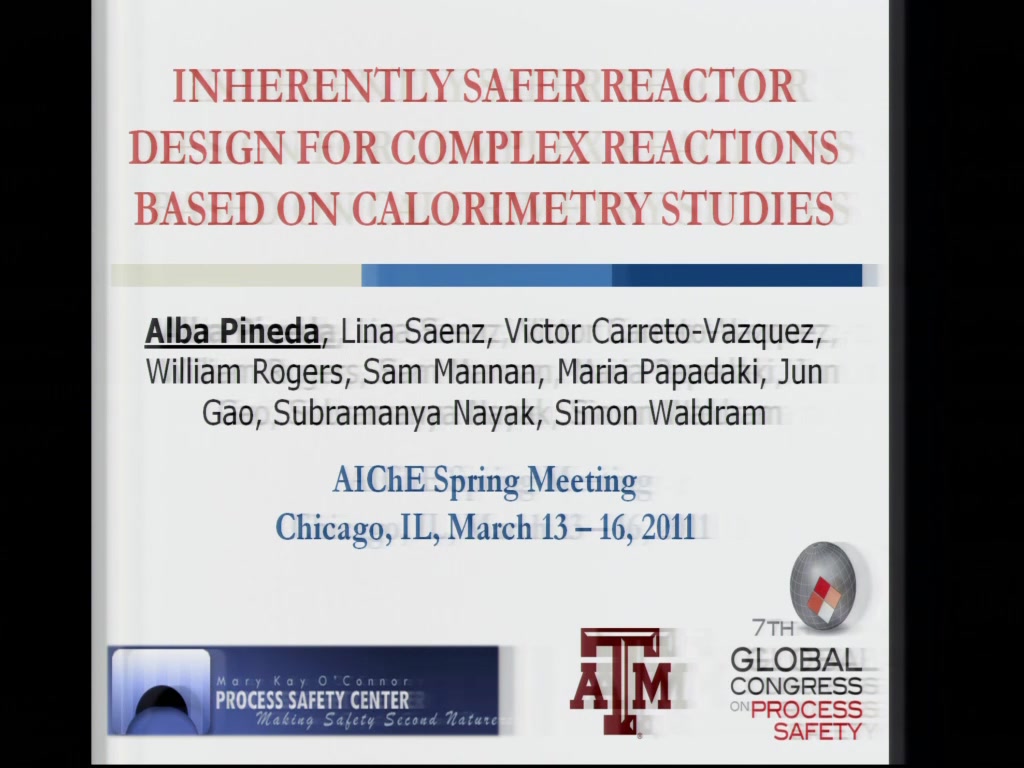 
A number of reactive processes of the agrochemical, fine-chemicals and pharmaceutical industries involve thermally unstable and/or toxic reactants, products or intermediates, for which the chemistry, thermochemistry and thermodynamic properties are barely known. They frequently employ multipurpose batch or semi-batch reactors. In their current mostly empirical designs, these reactors are prone to runaways because: (a) the application of fine, sophisticated control is difficult due to the variety of productions served by the same reactor (b) due to their complexity, there is a complete lack or scarcity of kinetic and thermodynamic data [1]. However, a reactor is often the heart of the process, [2], and the impact on the environment of such, empirically designed batch-reactor processes, measured via the E-factor, namely the mass of by-products produced per unit mass of product, is very high and substantially higher than the respective ratio of other ?traditional? large-scale, continuous, chemical processes [3]. This work addresses both the safety issues and the environmental implications that arise from the empirical design of added value chemicals production. It presents a methodology for the design of continuous, inherently safe and sustainable processes via the combination of calorimetry, computational chemistry, and reaction engineering. It focuses on small throughput added value processes which involve complex, homogeneously catalysed oxidations of organics, where hydrogen peroxide is the employed oxidant. In such reactors, hydrogen peroxide decomposition, producing gaseous oxygen is inevitable, while the organics present are often flammable. Hydrogen peroxide decomposition, which has been the cause of serious accidents, is condition dependent, for instance it is catalysed by traces of compounds such as metals, it is pH sensitive and there is strong evidence that it is also autocatalytic [4-7]. The proposed design ensures operation at high synthesis reaction rates via operation at conditions where: (a) synthesis reaction is consuming most or all of the supplied hydrogen peroxide. (b) hydrogen peroxide accumulation in the reactor is constantly low, so that its accumulation in the reactor will not impose any threats in terms of safety, while the rate its autocatalytic decomposition will be minimised (c) all the heat generated by exothermic reactions is utilised by the process and (d) the reactor size is small, however, it is not a microreactor.Case studies and preliminary experimental data will be shown. References [1] Barton, J. A., & Nolan, P. F. (1989). Incidents in the chemical industry due to thermal-runaway chemical reactions. In IchemE symposium series no. 115 (pp. 3?13) [2].Levenspiel O, Chemical Reaction Engineering. 3rd ed. 1999, New Jersey U.S.: John Wiley & Sons [3] Sheldom R.A., Catalysis and pollution prevention Chemistry and Industry, 6 Jan 1997pp.13Should be justified to the left (10 pt) [4] Mackenzie, J., Considerations for the safe design of processes using hydrogen peroxide and organics. Plant/Operations Progress, 1991. 10(3): p. 164-170. [5] Klais, O., Hydrogen Peroxide decomposition in the presence of organic material. A case study. Thermochimica acta, 1993. 225: p. 213-222. [6] Wehrum, W.L., Case Study of a Hydrogen Peroxide Related Deflagration in a Wastewater Treatment Tank. Process Safety Progress, 1993. 12(4): p. 199-202. [7] Lacoursiere, J.P., An explosion caused by mixing incompatible liquids. Process Safety Progress, 2005. 24(2): p. 115-119. Acknowledgements The financial support of this research by Mary Kay O'Connor Process Safety Center is greatly acknowledged.
Please note that due to the visual quality of this paper, there is no charge for it. The information is still valuable hence we are posting it here.
Preview Presentation:
Presenter(s):
Alba Lucia Pineda
Once the content has been viewed and you have attested to it, you will be able to download and print a certificate for PDH credits. If you have already viewed this content, please click here to login.

A Case Study on KOC Approach for PHA Revalidation of Existing Gathering Centre
Introduction: A hazard is an inherent physical or chemical characteristic that has the potential to do harm (to people, property, or the environment). A hazard...
Perfecting Proof Test Effectiveness; How More Extensive Testing Can Improve Safety and Reduce Cost!
We all know that a period functional test of the components in Safety Instrumented Functions is necessary to ensure the appropriate safety integrity is...