Inherently Safer Reactor Design: Challenges in the Changeover from Semi-Batch to Continuous 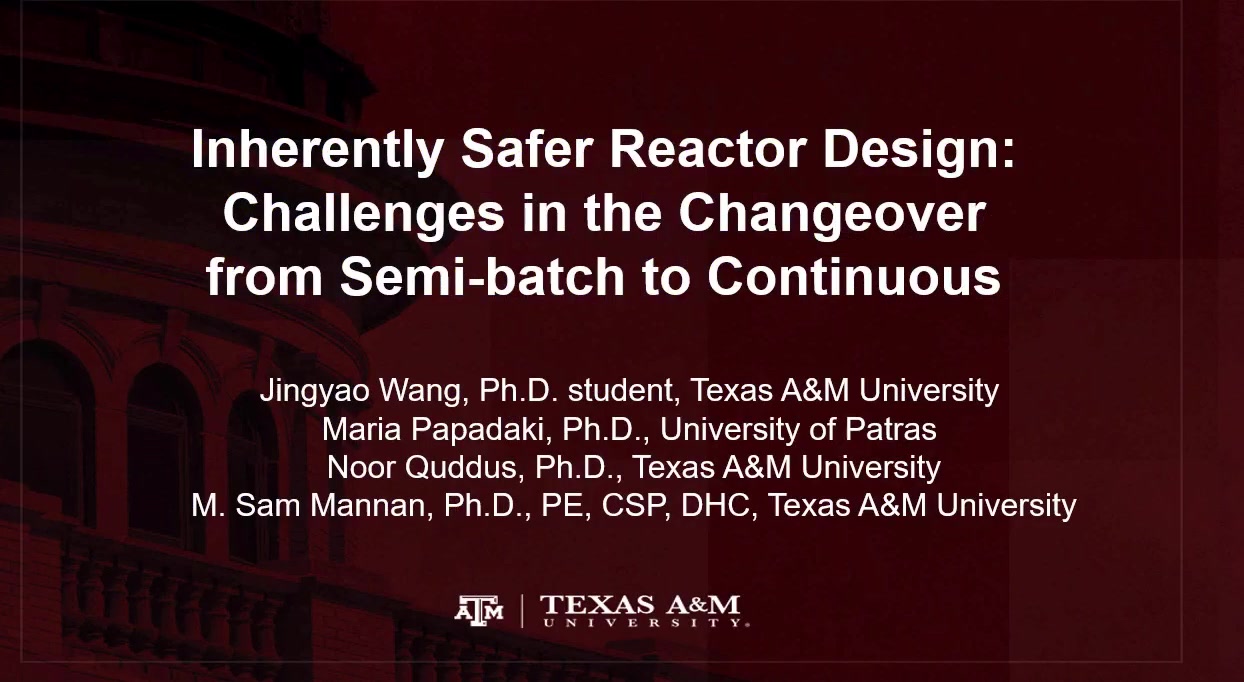 Inherently Safer Reactor Design: Challenges in the Changeover from Semi-batch to Continuous

Abstract: A significant number of chemical incidents are related to thermal runaways in batch reactor operation. For example, 189 industrial batch reactor incidents were reported from 1967 to 1989 (Barton & Nolan, 1989). Those incidents involved multipurpose batch or semi-batch reactors, which are intensively utilized in agrochemical, fine-chemicals and pharmaceutical production. The reactions performed often employ thermally unstable and/or toxic reactants, products or intermediates. Typical reactions of this type are oxidation, epoxidation and halogenation reactions of organics. Most highly exothermic reactions are performed in semi-batch mode with one of the reactants being added over the remaining ones, thus controlling the reaction rate and the amount of the generated thermal power. Although inherently safer than the batch mode, still this option has significant draw-backs in terms of both the safety and the efficiency of the process.

In the present work the changeover from semi-batch to continuous of a highly exothermic catalytic organic oxidation is researched. The oxidant of choice is hydrogen peroxide, the thermal and catalytic decomposition of which is always a concern to the safety of such processes:

There are several hazards related to those oxidations. However, it is envisaged that the reaction can be performed more efficiently and in an inherently safer manner, with higher selectivity towards the final product, if the semi-batch reactor is replaced by a continuous one.

In view of that, different reactor geometries have been considered and their pros and cons are discussed. The goal is to design a reactor in which reactant A concentration is always maximal (plug-flow) while hydrogen peroxide concentration is minimal (CSTR flow). Therefore, it is critical to design the reactor so as to achieve the optimum mixing conditions for hydrogen peroxide, which can be potentially achieved if it is distributed uniformly along the reactor through rows of radial jet flows. After developing the mass, energy and momentum balances, different reaction geometries and hydrogen peroxide distribution patterns were simulated using Computational Fluid Dynamic in ANSYS Fluent. Figure 1 shows the effect which hydrogen peroxide injection-speed has in a tubular reactor of 0.1 m diameter and 1 m length, which can produce up to 1000 ton/year of fine chemicals per year. As can be seen in Figure 1, the optimum hydrogen peroxide injection speed was 7.5 m/s; under these conditions uniform distribution of the temperature profile, to prevent hot spots can be achieved. The heat generation will be also integrated in the final design to preheat the feed stream, thus reducing utility costs. The study shows that such a design is economically sounder, more efficient and safer compared to traditional semi-batch processes.

Preview Presentation:
Presenter(s):
Jingyao Wang
Once the content has been viewed and you have attested to it, you will be able to download and print a certificate for PDH credits. If you have already viewed this content, please click here to login.

Improving Learning through Interactive Case Studies
Tragically, there is no shortage of case studies available to share learnings from catastrophic incidents across many industries, but we do not seem to be...
Application of the NFPA 654 Dust Layer Thickness Criteria – Recognizing the Hazard
This paper is an overview of the NFPA 654 layer thickness criteria, including the 2010 TIA, and potential misinterpretations that could result in failure to...