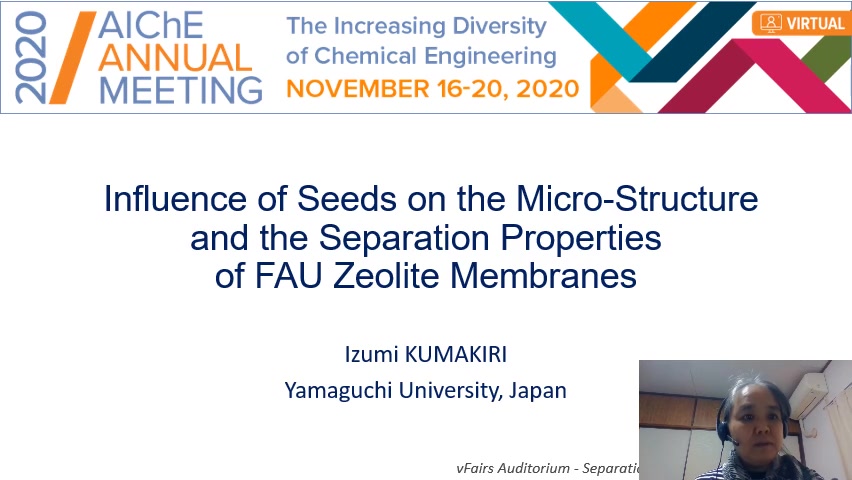 About half of the total energy at the chemical industries is consumed by separation processes 1. Membranes are recognized as a potential candidate for an alternative energy-efficient separation process. In the last few decades, micro-porous inorganic membranes have been attracting a significant attention, due to their superior resistance compared to conventional polymeric membranes in addition to their unique separation abilities as summarized in various reviews 2,3.

Zeolite membranes are the first micro-porous inorganic membranes commercialized. Since 1997, more than 300 units have been applied industrially to dry solvents. Research interests are extended to apply these hydrophilic zeolite membranes as membrane reactors in esterification, dimethyl ether synthesis, hydrogenation of carbon dioxide to methanol and other reactions 4-6. In these new applications, membrane stability is often discussed besides their permselectivity.

To understand the membrane properties, we have been interested in the contribution of inter-crystalline permeation pathways existing in the poly-crystalline zeolite membranes. TEM observation suggested assembly of small crystals with sub-micrometer size in the early stage of the densification of a FAU membrane, followed by a growth at the twin boundary 7. In this study, FAU membranes were prepared with different seeds. Formed membranes were tested by pervaporation with 10% water -90% ethanol (EtOH). 10wt% Methanol (MeOH) - 90% methyl methacrylate (MMA) mixtures, and pure components. While the dehydration selectivity was almost the same to the seed type, membranes prepared with smaller seeds had lower MeOH/MMA selectivity, showing larger contribution of the inter-crystalline permeation.

Preview Presentation:
Presenter(s):
Izumi Kumakiri
Once the content has been viewed and you have attested to it, you will be able to download and print a certificate for PDH credits. If you have already viewed this content, please click here to login.

Tunable Polyimide and Resulting Carbon Molecular Sieve Membranes for Gas Separation
Polymer membranes have been used for natural gas and olefin-paraffin gases separations successfully. However, the separation performance is limited by a...
The Perfluoropolymer Upper Bound
Perfluoropolymers have unique thermodynamic gas-phase partitioning properties relative to their hydrocarbon-based counterparts. For membrane-based gas...