Improving the Sustainability of Biofuels Through Modification of the Biomass Production Subsystem: Application to Corn and Lignocellulosic Ethanol | AIChE
Skip to main content

Improving the Sustainability of Biofuels Through Modification of the Biomass Production Subsystem: Application to Corn and Lignocellulosic Ethanol 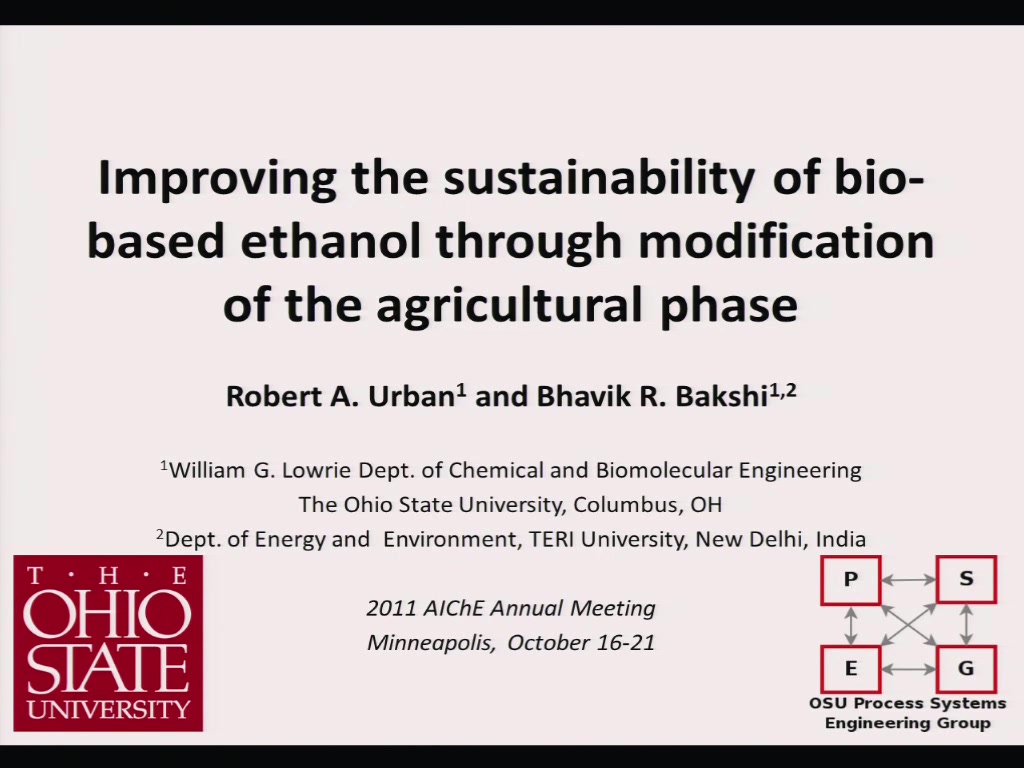 Concerns about dwindling fossil fuel reserves and climate change, energy independence, and depletion of ecosystem goods and services have driven the development of alternative technologies such as biomass-based fuels (biofuels). Although biofuels may be a step towards alleviating the aforementioned concerns due to the renewable nature of the biomass feedstock, there are several drawbacks associated with them. Food crop-based fuels such as corn ethanol, which comprise the majority of the current biofuel mix in the US, require large amounts of fossil-based inputs purchased from the economy in order to grow the biomass. These inputs, such as fertilizers, pesticides, and fossil fuels greatly diminish the renewable nature of the plant itself and force the production of biofuels to be reliant on non-renewable fossil-based inputs. In addition to reliance on non-renewable inputs, biofuels are heavily reliant on ecosystem goods and services. Current large-scale farming practices result in the runoff of nutrients from fertilizers into rivers and streams, which can overwhelm the carrying capacity of the nitrogen (N) and phosphorous (P) cycles of these aquatic ecosystems with devastating results. Freshwater for irrigation is needed if natural precipitation is not sufficient. Topsoil, a vital local non-renewable resource, is also depleted through erosion in traditional monocultural row cropping. Ecosystem goods and services are also indirectly consumed through the life cycle of the inputs used in farming.

This research aims to improve the sustainability of biofuels, specifically corn ethanol, by modifying the corn farming system to use less purchased inputs and consume less ecosystem goods and services both directly and indirectly through the reduction of fossil-based inputs needed from the economy. The following design changes will be considered:

1) No-till/conservation tillage. This will reduce soil erosion and require less labor and fuel for preparing soil for seeding. Application of more herbicides may be necessary as tilling helps remove weeds.

2) Planting winter cover crops in the growing offseason, also known as “double cropping”. This reduces bare soil exposure in the offseason, reducing erosion. Also, offseason weed growth can be reduced requiring less herbicide when the corn is planted. Depending on the species planted, soil nutrients can also be rebuilt in the offseason. However, additional labor, energy, and other inputs will be needed for planting and harvesting the cover crop.

3) Intercropping other species amounts corn during the growing season. This is often referred to as a polyculture. This can reduce soil exposure and hence reduce erosion and reduce fertilizer consumption due to fixation of nutrients by the intercropped species. However, separation of corn from the intercropped species may require additional inputs.

4) Constructed wetlands and/or riparian buffers for nutrient runoff capture. This can prevent nutrients from entering rivers and streams and reduce eutrophication.

5) Using treated sludge from wastewater treatment facilities (biosolids) for fertilizer, displacing the need for fossil-based artificial fertilizers. However, there is a limited supply of biosolids and may not be enough for large-scale application. Also, biosolids may be more labor and energy intensive to apply.

6) Fossil fuel substitution, i.e., replacing partially or fully the fossil fuels used in the farming system with biofuels to reduce the reliance on non-renewable inputs. Any disadvantage of biofuels will be compounded when fed back into the production of more biofuels.

The impact of these design changes will be quantified both directly and indirectly in the life cycle through the use of Ecologically Based Life Cycle Assessment (Eco-LCA) to determine the overall effect of the changes on the sustainability of corn ethanol. This LCA method will quantify traditional LCA impacts, such as emissions and energy consumption, but will also quantify the multitude of ecological goods and services consumed throughout the life cycle. This ecological accounting is vital to ensure the sustainability of any system since everything relies directly or indirectly on ecosystem services. Additionally, the resulting corn farming design is an example of the design of a technological-ecological network, where both technological and ecological variables are considered in the design of the overall system. Such systems are more sustainable than systems that use technological variables only, since technology alone cannot lead to sustainability due to second law constraints.

Although these design changes may improve the sustainability of corn ethanol, the scaling up of biofuel production can compete with food and lead to indirect land use change where native ecosystems such as forests are converted to farmland for biomass production, which may create a net greenhouse gas increase. Therefore, it is worth considering other biomass sources that can be produced on marginal lands. The case of producing ethanol from a low input, high diversity (LIHD) lignocellulosic grassland on degraded farmland will also be presented. LIHD biomass requires much fewer inputs than most monocultural biomasses and may be a sustainable source of liquid fuel. LIHD ethanol will also be compared with food crop-based ethanol as well as other cellulosic ethanol sources.

Preview Presentation:
Presenter(s):
Robert A. Urban
Once the content has been viewed and you have attested to it, you will be able to download and print a certificate for PDH credits. If you have already viewed this content, please click here to login.

Co-Pyrolysis of Low Rank Coals and Biomass At Transport Gasifier Conditions
Given the EPA’s proposed rules on limiting CO 2 emissions from new coal power plants to match those of natural gas, blending of carbon-neutral biomass with...
Hydrodeoxygenation of Bio-Oil over Pt Supported Catalyst: Importance of Mesopores and Acidity
Biofuel shows promising potentials to answer our current globule challenges on energy and environment. The key to its success lies on the conversion of biomass...