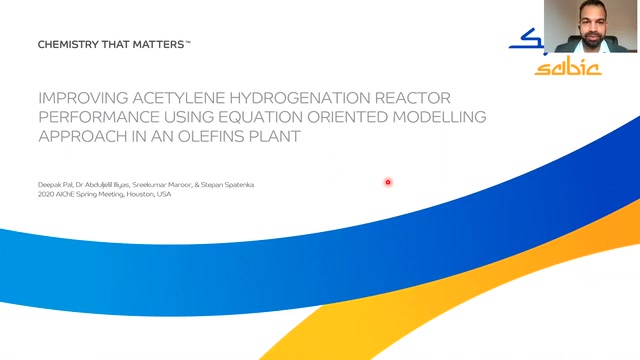 With the increasing market competitiveness and narrowing margins, it is crucial for industries to operate and utilities their assets in an ideal manner. SABICâ€™s olefins plants in the Kingdom are producing Ethylene using high temperature steam cracking of Ethane & Natural gas liquids. Along with Ethylene other side-products including acetylene are formed during the cracking process which is a catalyst poison for downstream polymer plants. In order to meet the ethylene product spec, acetylene is selectivity converted in hydrogenation reactor to ethylene. During this process some amount of ethylene is also converted into ethane and green oil, which deactivates the catalyst. Thatâ€™s why it is crucial to operate the reactor in an optimal condition so that maximum selectivity towards ethylene is achieved. Losing any amount of ethylene to ethane means excessive recycle processing at the cost of fresh ethane resulting lost opportunity to produce extra olefins.

As some of the olefins plant are decades old, a few lack facilities like mid bed cooling and hydrogen injection for a multi-bed setup. One of such SABIC plant have 2 bed reactor system without having a mid-bed exchanger and facility of injecting hydrogen. Due to this design, plant personnel used to carry out almost 100% percent conversion of Acetylene in lead bed to ensure zero acetylene in the reactor outlet as there was no control for inlet temperature and hydrogen for guard bed. This philosophy resulted in suboptimal operations of the reactor achieving lower ethylene selectivity. Changing the philosophy of conversion distribution across the beds along with other optimal conditions like inlet temperature and hydrogen ratio will improve ethylene gain across the reactor.

Our approach hence was to develop a rigorous first principle based model of the reactor system with reaction kinetics adopted from literature to predict the behavior of the reactor. An equation oriented model provided optimal parameters to the operators for maximizing the benefits across the reactor. The model helped in predicting the behavior of second bed operations which cannot be controlled due to lack of facilities of temperature and hydrogen control. This approach ensured no cases of acetylene slippage which would result into off spec product and flaring. It preliminary resulted in improvement of Ethylene gain improvement across the reactor and enhanced selectivity

Preview Presentation:
Presenter(s):
Deepak Barnwell
Julian Barnwell
Abduljelil Iliyas
Sreekumar Maroor
Deepak Pal
Julian Pal
Stepan Spatenka
Once the content has been viewed and you have attested to it, you will be able to download and print a certificate for PDH credits. If you have already viewed this content, please click here to login.

Improved Regeneration of Adsorbent Beds
Adsorbent bed treating systems are common in refineries and petrochemical manufacturing facilities and have widespread applications. They are used to dry...
Developing Abnormal Situation Management Skills in Ethylene Plant Console Operations
This presentation focuses on complex responsibilities of console operators in the ethylene industry, and the type of competency-based training that is needed...