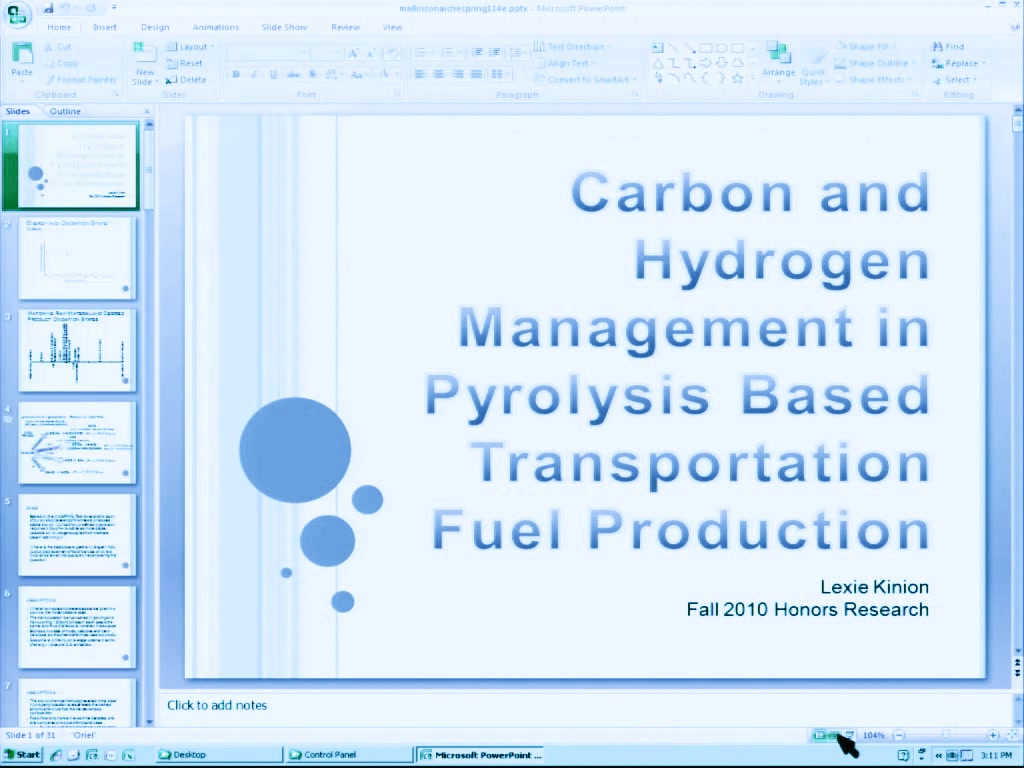 Biomass has the potential to supply significant quantities of transportation fuels as increasing worldwide demand will place significant pressure on the supply. In the US, increasing imports of energy could make any imbalance especially acute, as has been demonstrated in the past. Additionally, pressure continues to build for reductions in carbon emissions.

The transportation fuels infrastructure has developed around hydrocarbons over the last 100 plus years, and there is intrinsic incompatibility with oxygenates that limit their incorporation into the existing infrastructure that will require significant capital investment to change.

A “big picture” problem is that biomass carbon is in a relatively highly oxidized state that has a low energy density. To increase the energy density, and reduce the oxygen content to increase compatibility, the biomass must be significantly deoxygenated. Using thermochemical methods, there are various paths to achieve this that result in some combination of a loss of carbon or the consumption of hydrogen. Theoretically, the highest possible yield retains about 2/3 of the original carbon. This would be achieved through reactions that lose only CO2 and require no hydrogen. Practically, almost any process yield will be lower and the optimal cost may be a combination.

Within a process, several paths may be chosen and evaluated. For example, decarboxylation removes two oxygens for each carbon. Reactions wherein CO is lost allows the CO to be used to generate hydrogen via the water gas shift reaction that may be used to further remove oxygen as water, with no additional carbon loss. Hydrogen may be generated by gasification of the biomass, or its char, by steam reforming of natural gas, or by renewable wind and solar.

These methods all have tradeoffs that must be considered from several perspectives. This study does not consider the cost, which of course ultimately controls whether a process will be built, but considers the main objective of the conversion of biomass, that is production of transportation fuels.

Please Note: Members of the Fuels & Petrochemicals Division of AIChE are entitled to this content for free. Simply click on 'view this webcast' below and when you get to the shopping cart, your Division membership will be recognized and your price will be &'$0&'. Only AIChE members are entitled to join the Fuels & Petrochemicals Division. For more info please click here. click here
Preview Presentation:
Presenter(s):
Richard G. Mallinson
Once the content has been viewed and you have attested to it, you will be able to download and print a certificate for PDH credits. If you have already viewed this content, please click here to login.

Evaluating the Heat Exchanger Technologies Available for Use In Refinery Pre-Heat Trains
Fouling behaviour is a crucial consideration in the selection and design of heat exchangers to be used in refinery pre-heat trains. We make the following...
Using a Continuous MPC Algorithm to Control An Unsteady Batch Fermentation Process
Classical MPC has been leveraged to improve control on a nonlinear unsteady-state system, batch alcohol fermentation. The controller uses a hybrid model with...