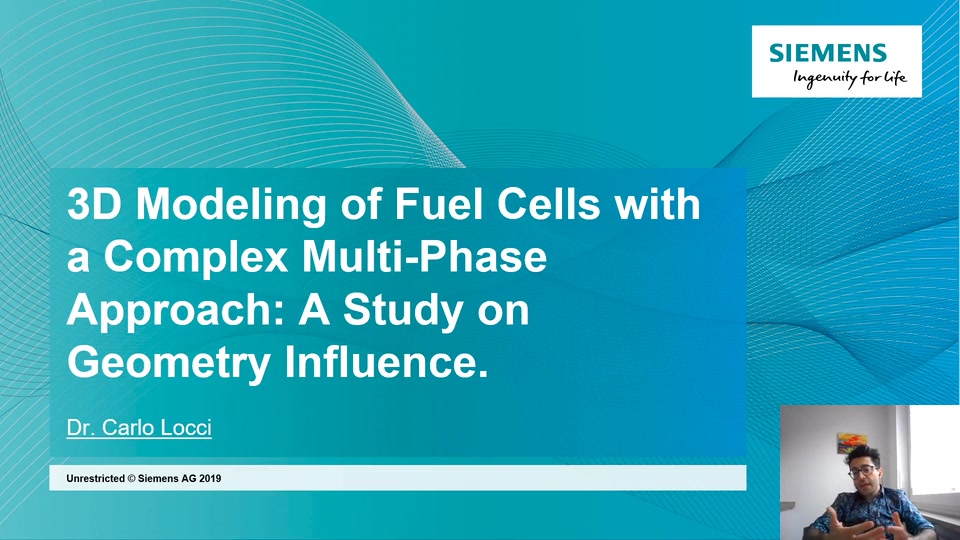 Hydrogen fuel cells can become a valid solution for EV in the automotive transport. Fast-fueling and longer range are the two positive aspects that make fuel cells attractive, compared to lithium-based batteries. In particular, hydrogen gets more traction for trucks and trains. In the automotive industry, Proton Exchange Membrane Fuel Cells (PEMFC) are the widely used solution for fuel cells as they require less platinum and work at high current densities. Platinum quantity is a critical cost factor impacting the final price of the cell. Its quantity optimization is thus a critical factor for the success of fuel cells. PEMFC are made of one anode and cathode, separated by a Nafion membrane. The membrane needs to work at an optimal humidification level. A low humidification level indicates dry-out, which can damage the membrane and shorten fuel cell durability. The main product of reactions at the cathode side is liquid water, which can lead to flooding. Flooding is a second major problem of fuel cells, for which a high quantity of liquid water prevents the correct feeding of reactants towards the membrane.

Understanding such phenomena via experimental test cases is extremely expensive. Neutron radiography is one of the most used methods to understand liquid production within the fuel cell layers whilst gas chromatography is used to understand water saturation. CFD techniques might help to provide further insights on such phenomena. In this work, three different configurations are simulated with Simcenter STAR-CCM+. A 3D single layer cell is modelled. The equations of flow, momentum and energy are solved for the anode and cathode channels with a no-slip condition at the walls to calculate the pressure drop. The channels are directly interfaced with the gas diffusion layers (GDL) calculated as a high porosity porous media. Hydrogen and oxygen diffusion from the channels through the GDL is calculated via a Darcyâ€™s law. Bipolar plates are represented as a solid able to conduct current and can produce ohmic heating. Bipolar plates are directly interfaced with a liquid water coolant to dissipate heat. Finally, the membrane is simulated as a solid including electro-osmotic drag, able to transport the positive ions produced from the reactions. Reactions occur at the infinitely thin layer between the GDL and the membrane. Two main reactions are considered. The first at the anode side, accounts for H2 splitting into one electron and a positive ion. The second one occurs at the cathode side and accounts for the reassociation of the positive hydrogen ion, one electron and oxygen, which leads to water as product. Water sorption reactions are also considered. The energy balance of the configurations simulated considers several energy sources. In particular, the model calculates the activation, ohmic and concentration losses to reconstruct the polarization curve. The polarization curves are shown for the three configurations and analysis of the several losses is provided.

The three configurations represent a single layer cell, with wavy channels. They differ with each other with respect to the entry area and the angle of the channel waves. Three main aspects will be described in this work. The impact of the geometry on hydrogen consumption and diffusion in the anode layers is analyzed. The works tries to understand how the GDL can smooth H2 gradients at the catalytic layer to improve temperature gradients. The second aspect studied in this work deals with the current production. Current gradients are stronger at the triple-phase-boundary (TPB) and might damage the bipolar plates on the long period. Considerations to reduce such gradients by modifying the geometry are reported. Finally, further investigation on liquid water production are shown. Liquid water is produced at low voltage-high current densities. Such work provides insights to understand where water accumulates in order to improve reactants feeding to the membrane. The variations applied to the geometries offer the possibility to understand how different design solutions can significantly improve durability and fuel cells efficiency.

Preview Presentation:
Presenter(s):
Ravindra Aglave
Christopher Attwood
Brian Attwood
Carlo Chen
Alan Chen
Carlo Locci
Alan Locci
Christopher Lueth
Brian Lueth
Once the content has been viewed and you have attested to it, you will be able to download and print a certificate for PDH credits. If you have already viewed this content, please click here to login.