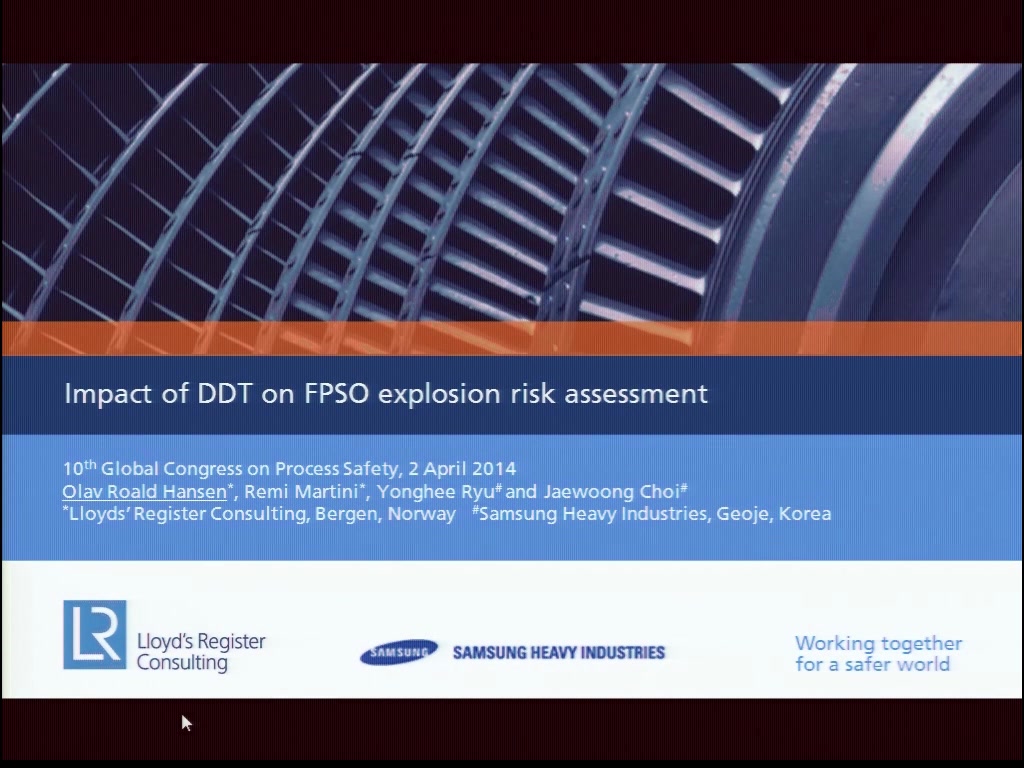 In recent explosion accidents on onshore petrochemical facilities, it has been concluded that a deflagration-to-detonation-transition (DDT) took place, both with LPG and gasoline vapor. DDT has also been observed in a number of large-scale experiments e.g. at DNV GL test site Spadeadam with ethylene, cyclohexane, propane and methane dominated (92%) natural gas. When DDT takes place, the flame propagation changes character and very high pressures (16-20 barg) and flame speeds (1600-2000 m/s) will result, even outside congested regions. This will normally have a significant impact on the severity of the near-field and far-field explosion loads.

It has not been generally accepted that DDT may be a threat at offshore petrochemical facilities, and even if this was the case, prediction tools have been missing, thus the potential effect of DDT is seldom considered in explosion studies. For FPSOs, and even more FLNGs due to larger dimensions and inventories, operators should be concerned that major explosion scenarios could lead to DDTs.

Recently a DDT prediction parameter has been implemented in the FLACS CFD explosion model, and with some model adjustments in FLACS it is possible to predict the effects of DDT and resulting explosion loads with good precision.

A CFD-based dispersion and explosion study on an FPSO will be presented in which the potential for DDT is evaluated, both with regard to frequency and potential consequences. The impact of assumed DDT on frequency-of-exceedance curves for explosion loads will be presented for selected targets inside and outside the process areas (e.g. at living quarter). DDT will mainly be a concern for large cloud sizes, often larger than usually considered for design accidental loads for an FPSO (frequency10-4/year). Mitigation measures will also be discussed, and the effect of a separation wall between the process and utility areas on dispersion, explosion and DDT-potential will be presented.

Preview Presentation:
Presenter(s):
Olav R. Hansen
Once the content has been viewed and you have attested to it, you will be able to download and print a certificate for PDH credits. If you have already viewed this content, please click here to login.