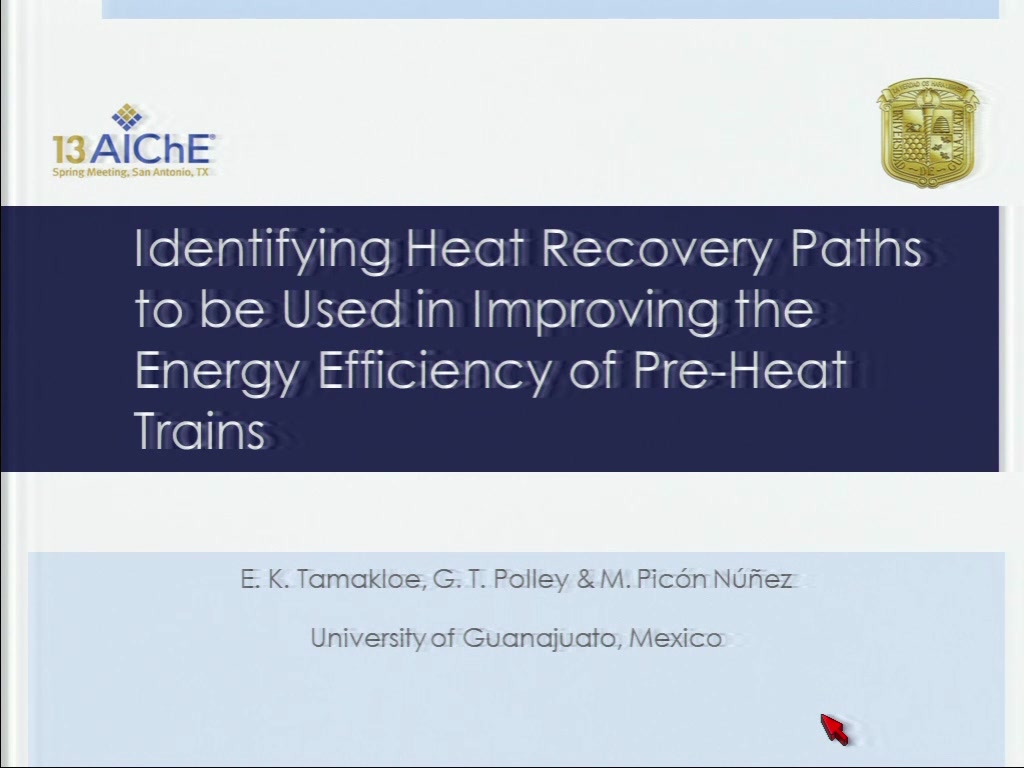 A heat recovery path consists of a combination of heat exchangers and pipework linking a heat source and a heat sink. The concept of transferring heat along paths in order to reduce the energy consumption of process plants was first suggested by Dhole [1]. It was subsequently investigated by Adiarso [2] and Van Reisen [3,4]. It forms the basis of a technique known as ?Network Pinch? introduced by Zhu & Asante [5].

The application of the approach to pre-heat trains has been discussed by Polley [6]. It was shown that the presence of process operations (de-salting and pre-flash) resulted in the need for a special feature (termed a ?bridge?) that allowed process heat balances to be maintained as additional heat is recovered. The presence of heat recovery ?blocks? (or local ?pinches?) had to be identified but could be removed through the introduction of stream splits. It was further shown that the presence of ?fixed duties?, such as those associated with pump-around streams had to be handled with particular care. Finally, it was claimed that whilst heat recovery paths can be quite complex and that usually there are a number of options available, the better options could be identified without the need for computer software.

In this paper the authors show, by working through a large example, how the presence of ?fixed duties? aids the identification of the paths that should be exploited in order to improve energy efficiency. The improvement in energy efficiency can come about through the installation of additional larger heat exchangers or through fouling mitigation. Both options involve the use of the path. So, path identification forms the first and key part of any energy reduction study.

The problem studied involves a pre-heat train containing both an atmospheric column and a vacuum column. Process operations employed are de-salting and pre-flash. There are ten heat recovery units positioned below the de-salter. These units link with eight individual coolers. Between the de-salter and the pre-flash column there are eleven heat recovery matches, one of which links directly with a cooler. Finally, there are five heat recovery matches positioned between the pre-flash column and the fired heater at the base of the atmospheric column.

Both of the distillation columns have pump-around streams (two used on the atmospheric column, three are used on the vacuum column). 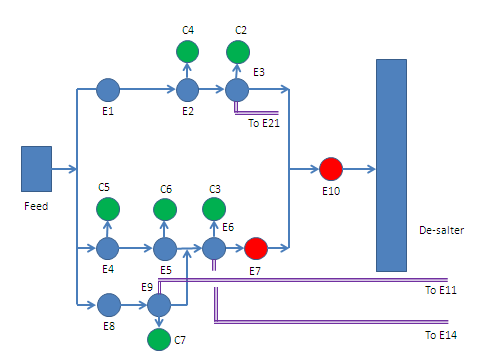 The system between the de-salter and the pre-flash column is shown in Figure 2. 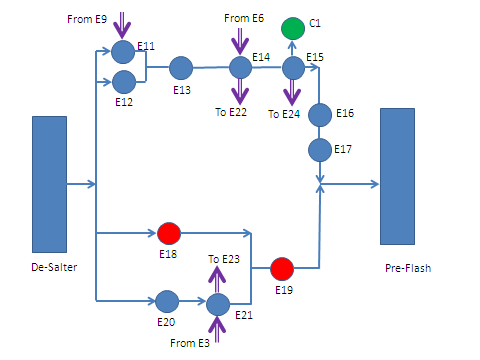 There are two parallel heat recovery trains. One of these trains has two units associated with column pump around.

One cooler (cooling the hot process stream leaving E15) is positioned in the system.

Finally, the heat recovery system positioned above the pre-flash column is shown in Figure 3. 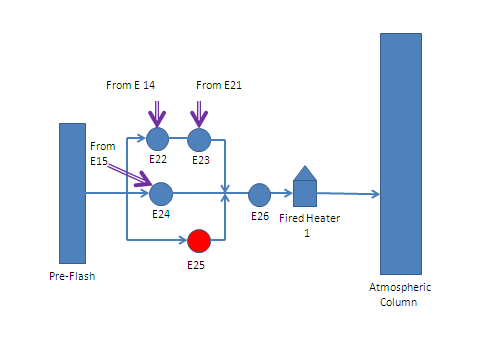 Examining the available paths leads to the following conclusions. The best bridge across the de-salter is that between E6 and E14 for this allows recovery to be made from a four individual coolers. However, E6 has a downstream effect on E10 so any reduction in inlet conditions on this unit needed to be compensated. (This occurs for all available bridges across the de-salter).

The bridge involving E3 and E21 is subsequently blocked by E19. If this bridge is to be used then careful consideration has to be given to the control of the pump around. It will only be justified if the loads on coolers C2 and C4 are large.

With regard to bridges across the pre-flash column, that involving E15 and E24 provides linkage to cooler C1 and should be used. The bridge involving E14 and E22 should also be used for E22 is positioned on a separate stream split to E24.

We conclude that the best heat recovery path through the pre-heat train is probably that involving E6-E14 and then E14-E22. This should be supplemented by the path involving E15-E24.

Preview Presentation:
Presenter(s):
G. T. Polley
Elvis K. Tamakloe
Once the content has been viewed and you have attested to it, you will be able to download and print a certificate for PDH credits. If you have already viewed this content, please click here to login.

Monetizing US Natural Gas
Over the last several years Bechtel has experienced a dramatic increase in project opportunities that will convert low-cost, abundant North American natural...
Maximizing LNG Capacity for Liquefaction Processes Utilizing Electric Motors
In some locations currently being considered for LNG projects, relatively low cost electricity from the local power grid may be available. For these facilities...