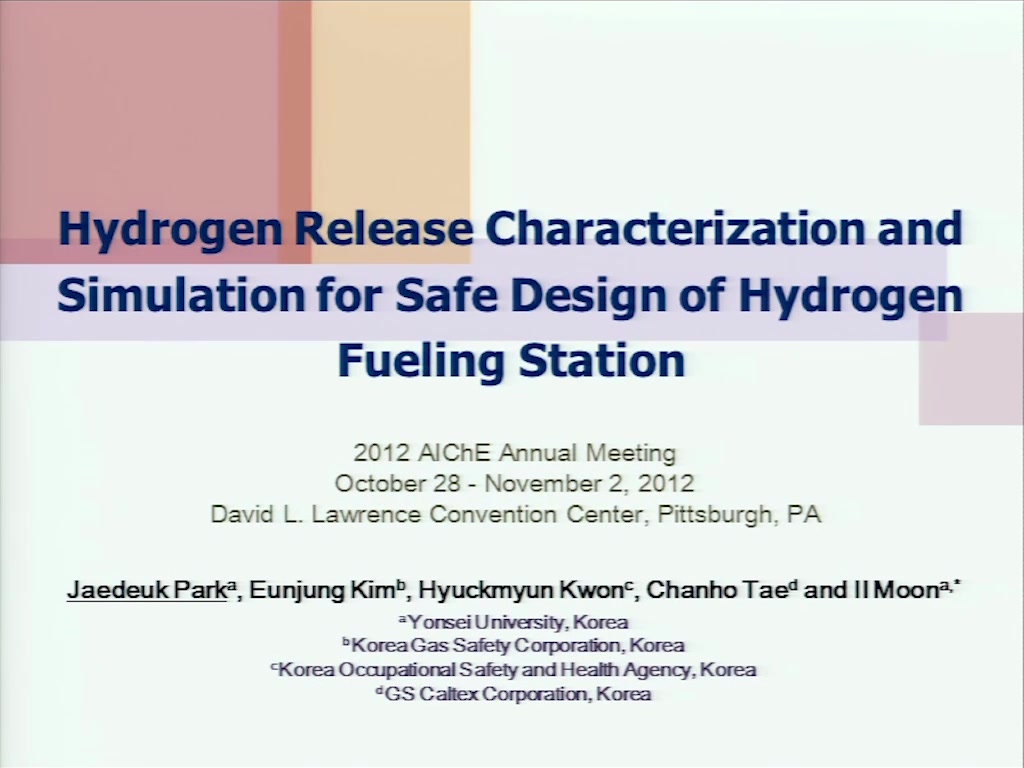 This work focuses on the experiment and 3D simulation of hydrogen leak scenario cases at a hydrogen fueling station, given conditions of a set of pressures, 100, 200, 300, 400 bar and a set of hydrogen ejecting hole sizes, 0.5, 0.7, 1.0 mm. The physical points for probing hydrogen concentrations along with the centerline of leak jet stream are positioned at a set of horizontal distances away from the hydrogen cylinder; 1, 3, 5, 7 and 9 m. Hydrogen concentrations are measured from 5 samplers and collected from 5 probe points. In this work, the simulation is performed using FLACS because one of the primary aims of this study is to identify safe distances in case of hydrogen explosion and FLACS, a CFD tool designed to simulate behaviors of both leak and explosion, is used to calculate the concentration profile of high pressure hydrogen in released jet stream. The simulation results are validated with experimental data and compared with those of previous study [3]. The simulation is based on real 3D geometrical configuration of a hydrogen fueling station that is being commercially operated in Korea. The simulation results are validated with hydrogen jet experimental data to examine the diffusion behavior of leak hydrogen jet stream.

The safety distance is defined as a distance between a major facility and building where people reside. Each nation has its own standard for the safety distances. It is defined as a distance at which the allowable burst pressure of 0.1226 bar is considered on the premise that it will not cause any human damage to the surroundings of the business or any property loss except minor ones. To identify the safety distances in hydrogen fueling stations, explosion scenario-based dynamic simulation is made, given a layout of facilities comprising the station. Hydrogen blast pressure profiles are calculated in case of explosion using FLACS, which provides information on the distribution characteristics of blast pressure through geometric facility configurations, and the directionality and development of explosion. 3D Simulation results of scenarios are shown in Fig. 1. Finally, a set of marginal safe configurations of fueling facility system are presented, together with an analysis of distribution characteristics of blast pressure, directionality of explosion. This work makes an important contribution to an enactment of official hydrogen safety distance in Korea being in the absence of such a standard as well as marginal hydrogen safety design for hydrogen fueling stations, enabling to keep a reasonable balance between less construction cost and high safety.

Preview Presentation:
Presenter(s):
Jaedeuk Park
Once the content has been viewed and you have attested to it, you will be able to download and print a certificate for PDH credits. If you have already viewed this content, please click here to login.