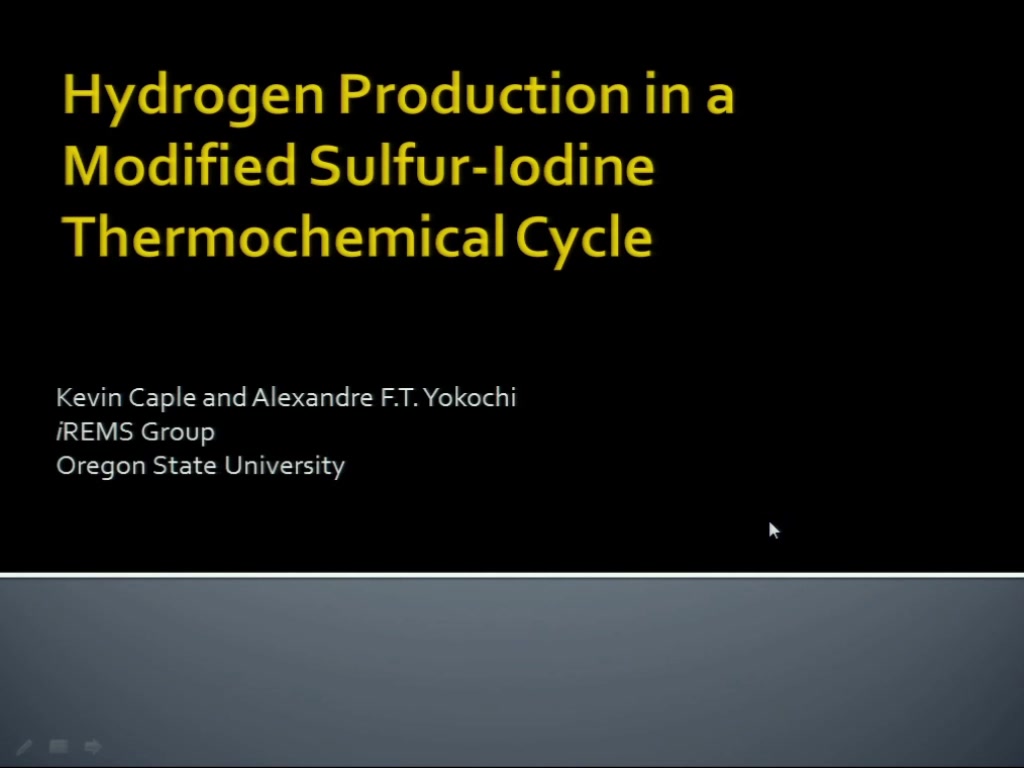 One of the most pressing issues of the new millennium is the development of clean, simple, and renewable energy sources.  Of the various process that have been studied, thermochemical water splitting is one that has been conceptualized and researched for over half a century, yet, at this point, none are commercially viable.  These thermochemical water splitting cycles include the family of Sulfur cycles and metal/metal oxide couples.

Of the Sulfur based cycles, one of the simplest is the Sulfur-Iodine cycle, which uses sulfur dioxide, iodine, and a large excess of water to produce iodic acid and sulfuric acid, both of which can be further processed into hydrogen and oxygen gases, and regenerate the initial sulfur dioxide and iodine for reuse.  Unfortunately, this process has been stalled due to difficulties separating the azeotropic iodic acid/water mixture.

We have developed an approach to avoid this issue in utilizing what was previously considered an undesired side reaction that produces hydrogen sulfide.  It has been shown that hydrogen sulfide can be successfully steam reformed into hydrogen, as well as regenerate sulfur dioxide to complete this modified Sulfur-Iodine cycle.  The series of reactions is as follows:

In our work we carry out the two low temperature reactions in an imidazolium based hydrophobic ionic liquid since both iodine and sulfur dioxide have solubilities in these.  In our presentation, we will discuss recent experimental results of this reaction in ionic liquid, including kinetic parameters, the results of  regenerating of the ionic liquid, and the extent of the cyclic reaction.

Preview Presentation:
Presenter(s):
Kevin Caple
Once the content has been viewed and you have attested to it, you will be able to download and print a certificate for PDH credits. If you have already viewed this content, please click here to login.