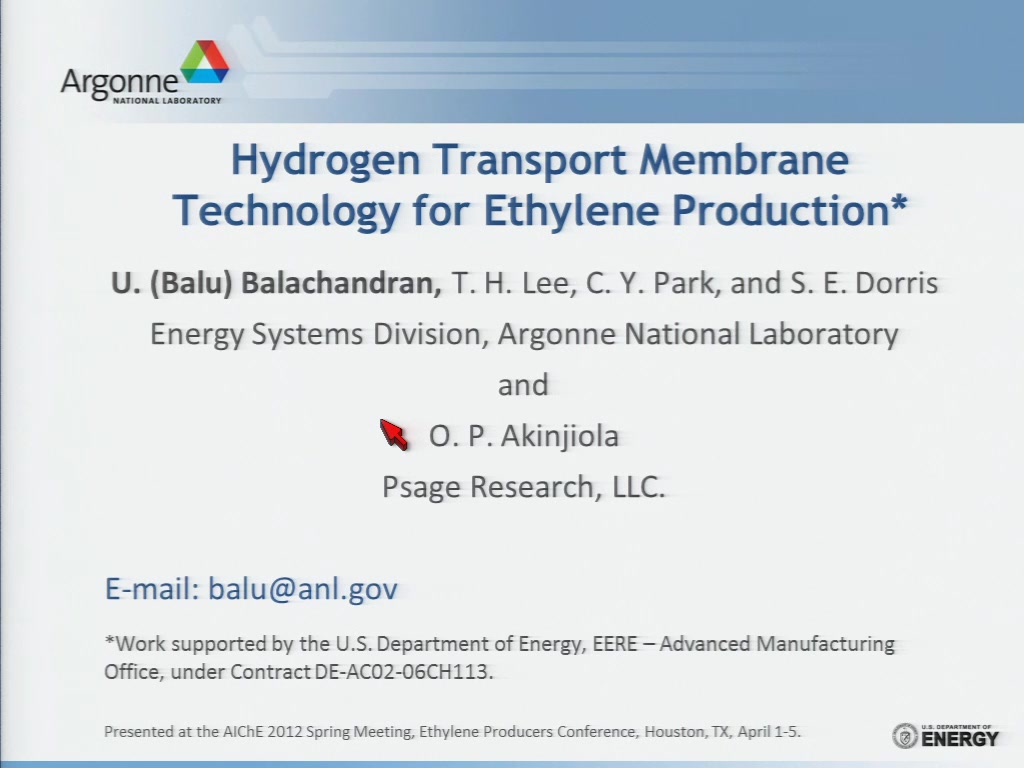 Ethylene, the largest volume commodity chemical manufactured today, is currently produced by pyrolysis of ethane in the presence of steam. Thermodynamically limited in terms of its equilibrium conversion, this process requires substantial energy input. The Chemical Bandwidth Study conducted by the U.S. Department of Energy (DOE) Office of Industrial Technologies Program (ITP) compared recoverable energy potential across fifty-three chemical technologies and listed ethylene at the top of the list with a recoverable energy potential >250 x 1012 Btu/yr. A subsequent study by DOE-ITP concluded that pushing the cracking equilibrium to higher conversion by removing hydrogen as it is formed would give a substantial energy intensity advantage and would represent a fruitful avenue for future research. Our project offers a new approach for producing ethylene, wherein a hydrogen transport membrane (HTM) selectively removes hydrogen during the dehydrogenation of ethane, thereby shifting the equilibrium toward ethylene production. Enhanced conversion beyond the thermodynamic limits by removing hydrogen provides higher conversion per pass, lowers the ethane recycle to the cracking unit and reduces the number of necessary purification steps. Purification represents about 50% of the energy consumption and 70% of the cost in the energy-intensive pyrolysis approaches used today. Besides significantly reducing the energy costs, the new HTM approach yields savings in feedstock and capital costs.

In our approach, a disk-type HTM is used to produce ethylene by dehydrogenation of ethane at 850°C. In an experiment ethane was passed over one side of the HTM membrane and air over the other side. The hydrogen produced by the dehydrogenation of ethane was removed and transported through the HTM to the air side. The air provided the driving force required for the transport of hydrogen through the HTM. The reaction between transported hydrogen and oxygen in air can provide the energy needed for the dehydrogenation reaction. At 850°C, equilibrium conversion of ethane normally limits the ethylene yield to 64%, whereas in our experiment under the same condition, we obtained an ethylene yield of 69% with a selectivity of 88%. Further improved HTM materials will lower the temperature required for high conversion at a reasonable residence time, while the lower temperature will suppress unwanted side reactions and prolong membrane life. Thus, the approach simplifies overall product purification and processing schemes, and results in greater energy efficiency. A mathematical model of a HTM membrane reactor used for ethane dehydrogenation is being developed. The results of our experimental work and modeling studies will be presented at this talk.

Preview Presentation:
Presenter(s):
U (Balu) Balachandran
Once the content has been viewed and you have attested to it, you will be able to download and print a certificate for PDH credits. If you have already viewed this content, please click here to login.

A Combined DFT and Classical Force-Field Approach for Modeling Kinetics of Acid-Catalyzed Reactions in Mixed Solvents.
The kinetics of acid-catalyzed dehydration reactions of biomass in aqueous solution are impacted by addition of aprotic solvents. Electronic structure and...
Modeling of Cu Oxidation in Air Reactors of Chemical Looping Combustion Systems
An oxidation model is developed that describes Cu (copper) oxidation kinetics to CuO (cupric oxide) for applications in the air reactor of chemical looping...