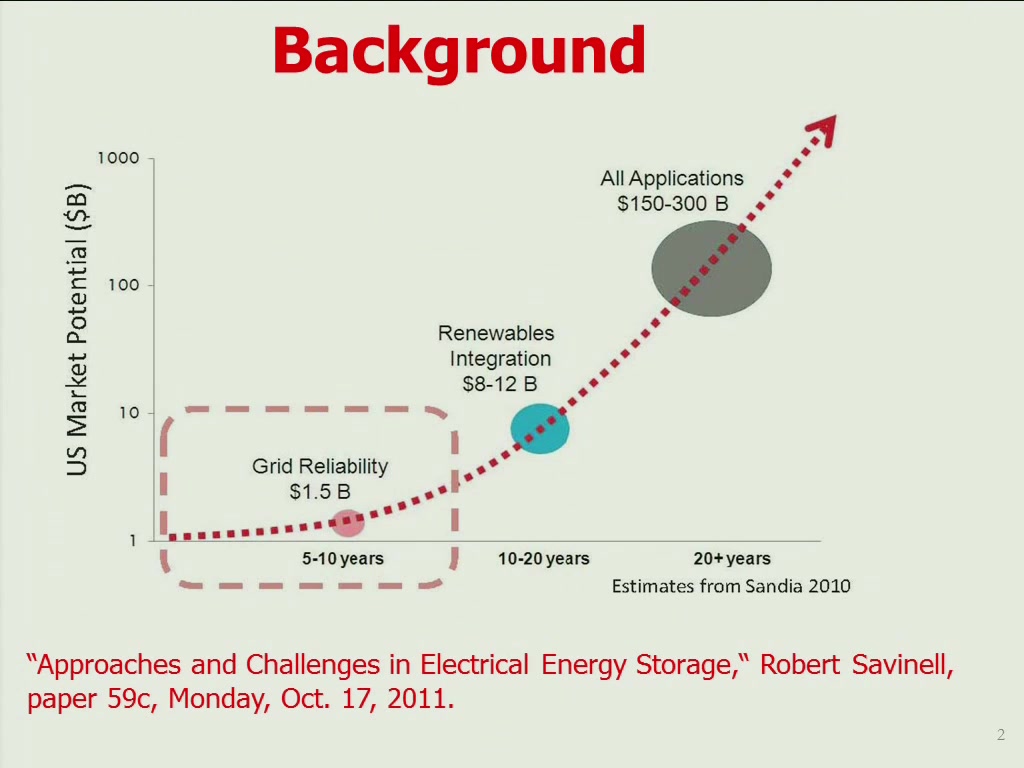 Renewable energy, including wind and solar, could supply a significant amount of electrical energy in the United States and around the world. However, despite the benefits of wind and solar, integration of these intermittent sources into the electrical grid system poses major challenges to the utility industry. Their unpredictability introduces more uncertainty to the power grid especially their unavailability when electricity is needed. Consequently, these intermittent energy sources can be fully exploited only if efficient, safe and reliable electrical energy storage (EES) systems are provided. Energy storage systems when used in a distributed manner, like at the point of use, also allow us to reduce the load on our existing electrical generation and transmission infrastructures.

Batteries and fuel cells/flow batteries differ in two main aspects. In a battery, the energy is stored internally, and the electrodes at which the energy conversion reactions occur are themselves the electrochemical fuel. The characteristics of the electrodes determine both the power density and the energy density of the battery. As a battery converts its chemical energy to electrical energy, its energy conversion components, the electrodes, are consumed and undergo significant physical and chemical changes which affect its electrical performance. Furthermore, because of the dual functions of the electrodes described above, a battery has minimal or no scale-up advantages. Instead, it can only be scaled-out. That is, if more energy is needed, then more battery modules with identical components are added. Consequently, a battery can never approach its theoretical energy density.

A flow battery or fuel cell, on the other hand, is an energy conversion device in which the active materials are stored externally. The electrodes of a flow battery/fuel cell can be designed to have optimal energy conversion properties without the need to also maximize energy storage density. Furthermore, the electrodes do not undergo physical and chemical changes during operation, thus leading to more stable and durable performance. The energy capacity requirement of a flow battery/fuel cell is addressed by the size of the external fuel and oxidant storage devices. Consequently, a flow battery/fuel cell system could theoretically approach its theoretical energy density as the system is scaled up to a point where the weight or volume of the fuel cell is small relative to that of the stored fuel and oxidant. This presentation discusses the advantages and disadvantages of a hydrogen-bromine flow battery/fuel cell system and presents some recent performance data obtained on this system.

Preview Presentation:
Presenter(s):
Trung V. Nguyen
Once the content has been viewed and you have attested to it, you will be able to download and print a certificate for PDH credits. If you have already viewed this content, please click here to login.

Convection Battery - Elimination of Dendrite Failure
The convection battery pumps liquid electrolyte between the electrode and counter-electrode. It is different from flow batteries in that the same electrolyte...
Comparison of Chemical and Biological Delignification of Cardboard
Some processes aimed to biofuels production, use lignocellulosic wastes as feedstocks for fermentative conversion. If this is the case, pretreatment is...