Hydrodeoxygenation Or Reforming of Biomass? a DFT Study | AIChE
Skip to main content

Hydrodeoxygenation Or Reforming of Biomass? a DFT Study 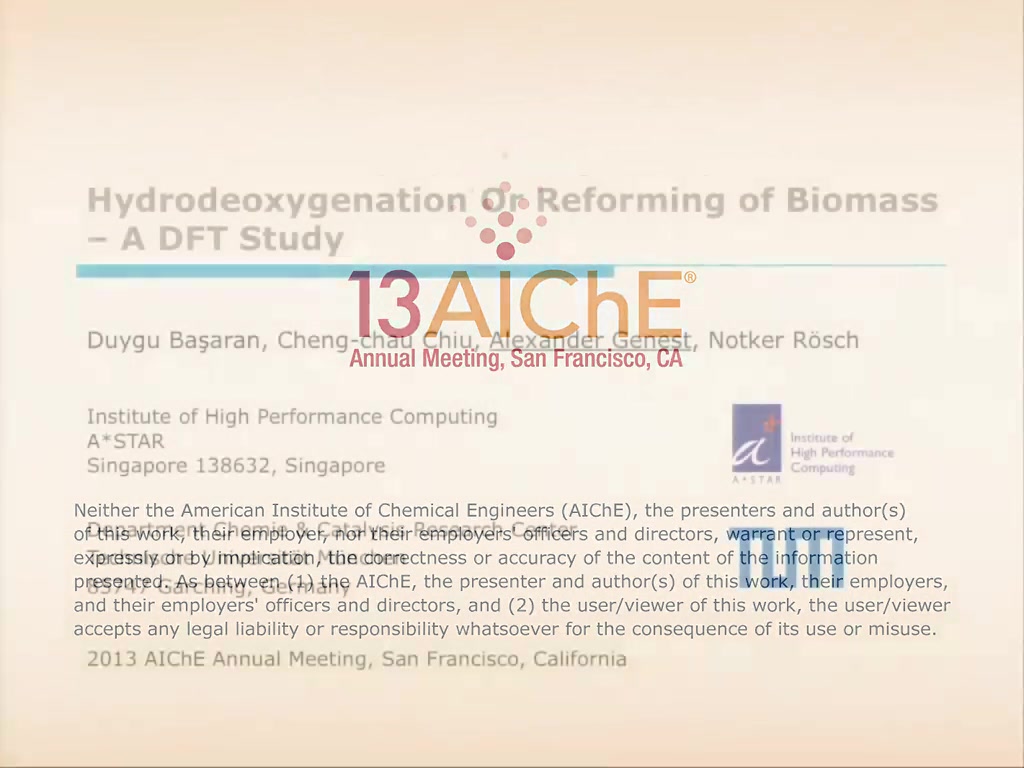 Cost effective conversion of plant and municipal solid waste material (biomass) into materials of higher energy density , to be utilized in the framework of the current carbon-based supply infrastructure , is one of the major challenges for a sustainable future. Aqueous-phase processes proceeding on supported metal catalysts may be a promising approach for the conversion of biomass to alkanes [1] , but can also be used for the production of hydrogen [2] , along with CO2. These processes and their selectivities are studied for alcohols as model feedstocks to understand mechanisms involved in processing oxygen containing species. We carried out electronic structure calculations at the DFT level on periodic slab models using VASP. We explored 1- and 2-propanol as models , adsorbed on flat and stepped surfaces of platinum [3-5]. We examined two scenarios generating either H2 or alkanes. On Pt surfaces , hydrogen formation was calculated to be favored over alkane formation , in agreement with experiments [6]. First , we rationalized the experimentally found dissimilar behavior of primary and secondary alcohols in the formation of H2 [3]. After dehydrogenating a primary alcohol in several steps , the C-C bond is cleaved , leading ultimately to carbon dioxide and ethane. Hereby the experimentally observed CO2can be directly released or formed in a subsequent water-gas shift reaction after decarbonylation. Our calculations show that the propensity for C-C bond cleavage depends on the structure of the catalyst surface and on its capability to activate water [4]. The formation of alkanes , involving the cleavage of the alcohol C-O bond on the Pt surface , can proceed by various pathways. For 1-propanol , we present a dehydration-hydrogenation mechanism via propylene as intermediate and a hydrogenolysis mechanism. The former may be able to compete , under acidic conditions , with H2formation [5]. References: [1] J. N. Chheda , G. W. Huber , J. A. Dumesic , Angew. Chem. Int. Ed. 2007 , 46 , 7164. [2] R. D. Cortright , R. R. Davda , J. A. Dumesic , Nature 2002 , 418 , 964. [3] D. Basaran , A. Genest , N. Rösch: J. Catal. 2012 , 287 , 210. [4] D. Başaran , A. Genest , J. A. Lercher , N. Rösch , submitted. [5] C.-c. Chiu , A. Genest , N. Rösch , ChemCatChem 2013 , DOI:10.1002/cctc.201300184. [6] A. Wawrzetz , B. Peng , A. Hrabar , A. Jentys , A. A. Lemonidou , J. A. Lercher , J. Catal. 2010 , 269 , 411.

Preview Presentation:
Presenter(s):
Alexander Genest
Once the content has been viewed and you have attested to it, you will be able to download and print a certificate for PDH credits. If you have already viewed this content, please click here to login.

From Field to Fuel: The Effect of Biomass Feedstock Composition on Fast Pyrolysis, Vapor Phase Upgrading, and Hydrotreatment
Fast pyrolysis of biomass followed by hydrotreating of the resulting pyrolysis liquid can produce a low-oxygen hydrocarbon liquid which holds promise as a...
Battery Design for Large Lithium and Zinc Batteries
A battery design is being evaluated which is particularly useful for larger battery applications such as in PHEV and electrical grid applications. Preliminary...