How Could This Polymer Catch Fire? Uncovering the Hidden Runaway Oxidation Hazard of Solid-Phase Polyethylene | AIChE
Skip to main content

How Could This Polymer Catch Fire? Uncovering the Hidden Runaway Oxidation Hazard of Solid-Phase Polyethylene 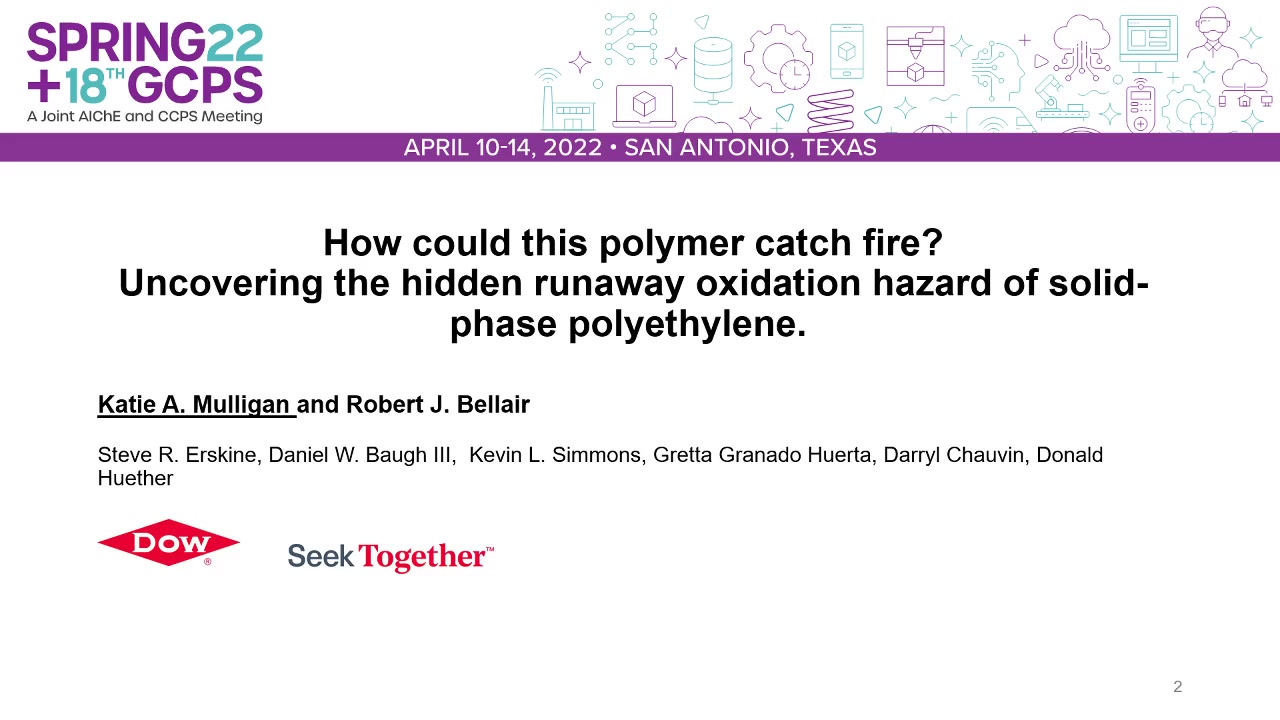 In 2020, at a Dow polyethylene manufacturing plant, a significant fire occurred inside a silencer on the discharge side of a polymer-conveying blower. The silencer, designed to contain only air and constructed from aluminum, became so hot that it melted and failed. When the incident investigation revealed that the fireâ€™s â€œmost likelyâ€ causesâ€”including combustible dust, unreacted hydrocarbons, and oil leak-by â€” were not supported by the evidence, the investigation team carefully considered all available evidence and conducted strategic analyses to determine the root cause.

Physical inspection revealed significant polyethylene accumulation inside the failed silencer. While the team was confident that the polymer was the fuel source, the operating temperature of the silencer was considered â€œmildâ€ and essentially zero-risk for polyethylene autoignition. Regardless, the team let the evidence guide us. Polymer was sampled from the silencer and chemical and physical properties were determined using optical infrared (IR) spectroscopy and Differential Scanning Calorimetry (DSC), which revealed a range of unexpected melting and oxidative behavior. Open-Cup Accelerating Rate Calorimetry (ARC) analysis of the accumulated polymer confirmed that oxidized polymer from the silencer exhibited much faster, sustained oxidation at much lower temperatures than polyethylene fresh from the reactor. These data, combined with engineering calculations confirming that polymer build-up restricted airflow and led to elevated blower discharge temperatures, proved that polyethylene fines could accumulate, partially oxidize under warm air flow, and lead to an autoxidation fire.

This paper will chronicle the Root Cause Investigation, incident learnings and resulting improvements in hazard awareness, operational discipline, and process equipment design to prevent recurrence. Finally, the impact of this incident and how it alters how Dowâ€™s risk perception of accumulated polyethylene fines across our manufacturing sites will be discussed.

Preview Presentation:
Presenter(s):
Katie Mulligan
Once the content has been viewed and you have attested to it, you will be able to download and print a certificate for PDH credits. If you have already viewed this content, please click here to login.

Dust Explosion
Catastrophic dust explosions in 2003 and 2008 have placed an increased emphasis on the prevention and mitigation of dust explosions. In response to these...
Tutorial on Auto-Refrigeration and Brittle Fracture Analysis (Part 2)
The tutorial is aimed at entry level to seasoned veteran engineers that desire to have a better understanding of this multidiscipline process safety risk. Part...