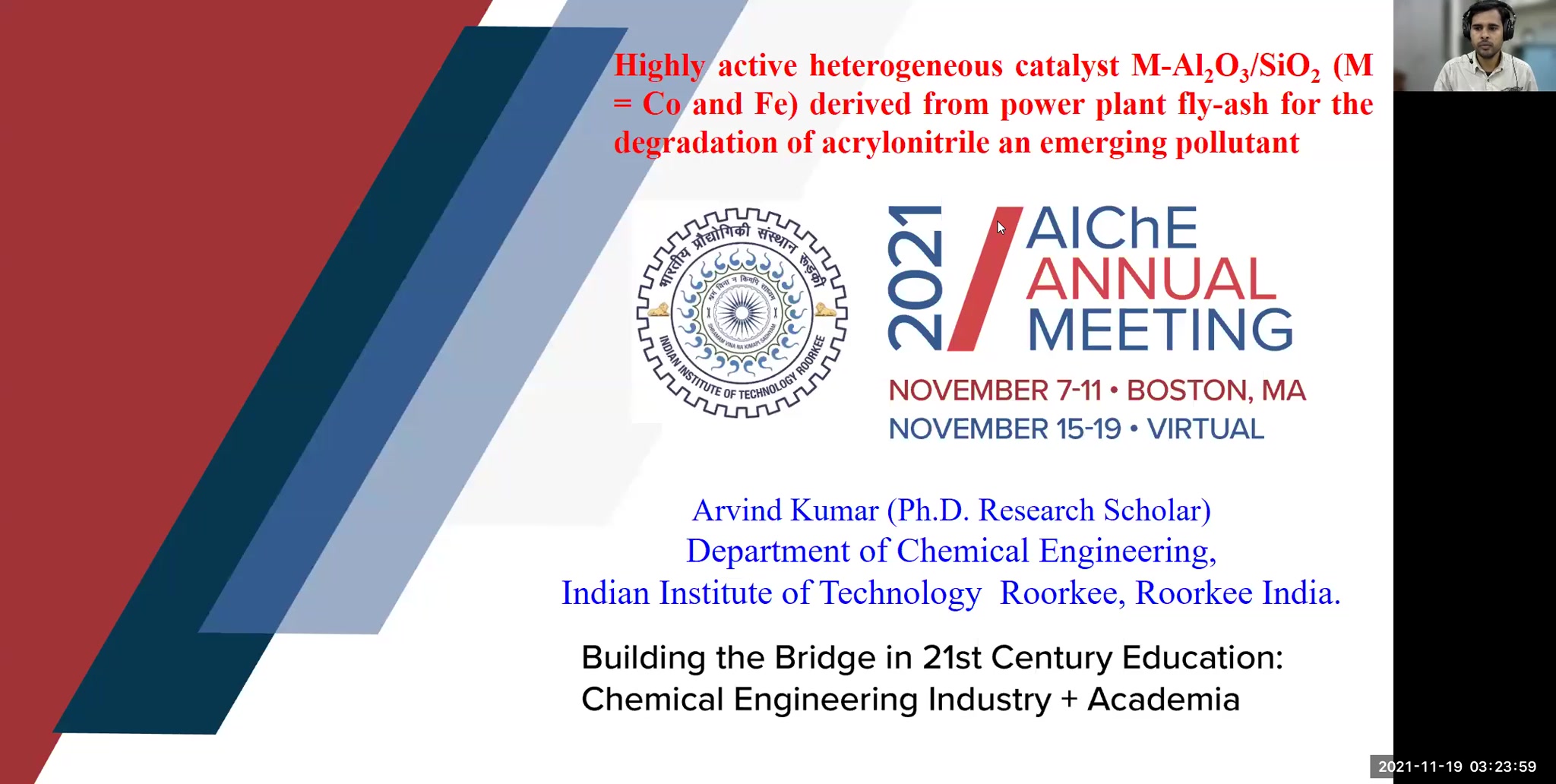 Acrylonitrile is one of the major toxic and refractory pollutant that widely used in the synthesis of nitrile rubber, ABS resins, plastic and acrylic fiber. United States Environmental Protection Agency (USEPA) classified as a 3rd priority pollutant in the list of 129 priority pollutants. The chronic exposure of acrylonitrile leads to detrimental impacts on human bodies viz., asphyxia, inflation in respiratory system, mild jaundice, eye irritation, vomiting, headache etc. Therefore, it is urgently needed to treated acrylonitrile containing wastewater. A highly active heterogeneous catalyst M-Al2O3/SiO2 (M = Cu, Fe and Ni) was derived from power plant fly-ash and further used to treat acrylonitrile. Fly-ash is a byproduct of power plant and a major source of water and air pollution. It pollutes the atmosphere and threaten the human health if it is not treated and directly discharge from power plant chimneys into atmosphere. Therefore, fly ash was used as a supporting material in M-Al2O3/SiO2 heterogeneous catalyst.

Some preliminary experiments were conducted and observed that only i.e., 32.62%, 36.15%, and 24.12% of acrylonitrile degraded with catalysts, Cu-A/S, Fe-A/S and Ni-A/S, respectively in the presence of H2O2 and only 18% of acrylonitrile removed without using any catalyst in the presence of H2O2 as shown in figure 1. The plausible reaction mechanism for acrylonitrile degradation at optimum operating conditions were proposed according to intermediates detected by GC-MS analysis. The hydroxyl radical generated mechanism is shown in Figure 1.

Preview Presentation:
Presenter(s):
Arvind Kumar
Once the content has been viewed and you have attested to it, you will be able to download and print a certificate for PDH credits. If you have already viewed this content, please click here to login.

Assessing Ozonation Suitability for Secondary Effluent Treatment Via Virtual Piloting with the Amozone Model
Introduction Drinking water treatment and (indirect) potable water reuse (IPR) is nowadays a topic of major attention due to the rising (and interconnected)...
Breaking Aliphatic Carbon-Carbon Bonds Via Electrochemically Mediated Hydrogen Atom Transfer Reactions and Its Application to Polystyrene Deconstruction
Background The selective cleavage of carbon-carbon (C-C) bond is central to plastic deconstruction and biomass valorization. 1â4 However, the...