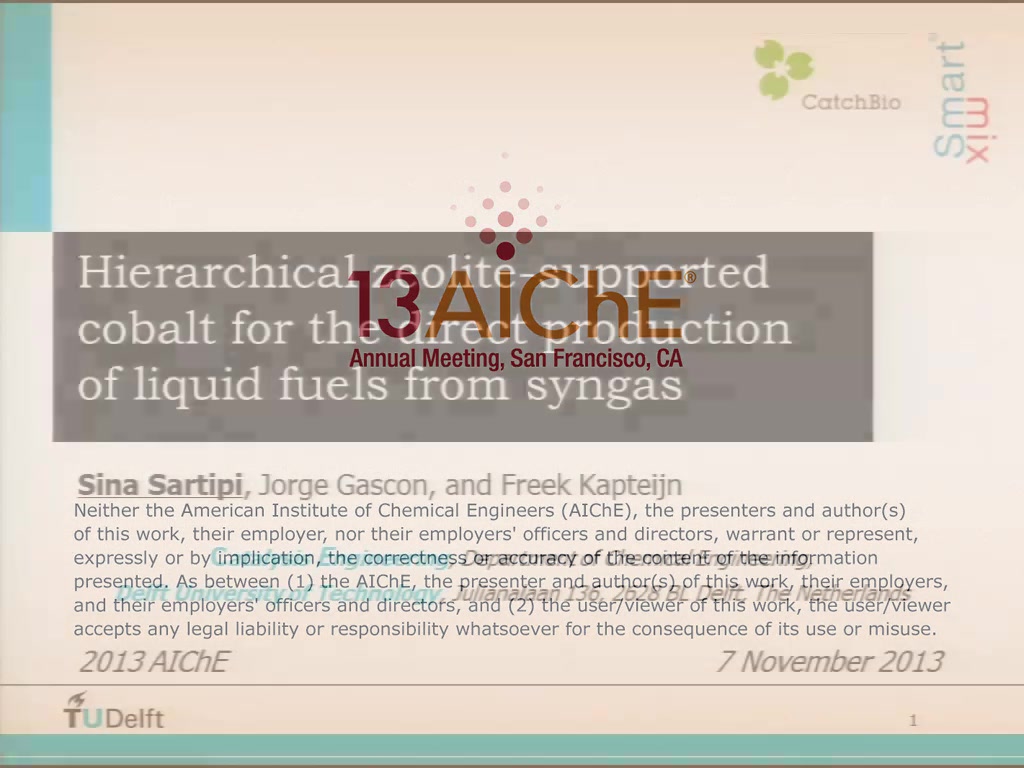 Fischer-Tropsch Synthesis (FTS) is the core of the Gas-to-Liquid (GTL) technology. During FTS, a mixture of CO and H2 (syngas) is catalytically converted into a wide spectrum of hydrocarbon chains through a surface polymerization reaction. GTL technologies are currently economically attractive only at very large scales. In this sense, process intensification is a must if these tools are to be applied for applications where limited feedstock availability (e.g., Biomass-to-Liquid (BTL)) or spatial constraints (e.g., conversion of offshore flare gas) are obstacles [1]. GTL process intensification has been investigated in terms of both reactor and catalysis engineering: while the use of structured catalysts and reactors maximizes the FTS efficiency by improving mass and energy transport [2–5], many efforts have been devoted to developing catalyst formulations able to maximize the direct production of liquid fuels (desired products) by combination of FTS and hydrocarbon cracking and isomerization into one single catalyst particle [6]. A promising approach consists of using mesoporous (hierarchical) zeolites as FTS catalyst supports [6–8]. Bringing zeolite acid sites in a close proximity to the FTS active phase results in bifunctional catalysts exhibiting a high selectivity to gasoline fraction [6]. With most studies dealing with the use of ZSM-5 as catalysts carrier, it has been proposed that hydrocarbon cracking and isomerization contribute to a non-ASF (Anderson-Schulz-Flory) product distribution. However, very little is known about the quantitative effect of both acid catalyzed reactions and even less about the effect of zeolite properties and structure on the product distribution.

In this contribution, different zeolite topologies are modified with respect to their mesoporous hierarchy and amount of extra framework aluminum (EFAl) and quantitatively compared for application in Co-based FTS catalysts. By various spectroscopy techniques and acid catalyzed hydrocarbon conversion reactions, it is demonstrated that the zeolite topology and, most importantly, the amount and strength of acid sites are key parameters in the performance of bifunctional catalysts to maximize the FTS product selectivity towards liquid hydrocarbons.

Three selected zeolites in proton form with different framework topologies, namely MFI (H-ZSM-5), delaminated MWW (H-ITQ-2) and FAU (H-USY) were used as FTS catalyst support. H-ITQ-2 was directly used (as support), while commercial H-ZSM-5 and H-USY zeolites were leached in basic solutions to increase their mesoporous surface area. The mesoporous H-ZSM-5 (‘mesoH-ZSM-5’) was also acid treated for EFAl adjustments. The (commercial) parent zeolites as well as the modified ones were loaded with 10 to 20 wt.% Co. For comparison, Co/SiO2 was chosen as a conventional reference catalyst.

The textural and chemical properties of supports and catalysts were thoroughly characterized by various techniques including N2 physisorption, XRD, ICP-OES and quasi in-situ TEM. The effect of base/acid treatments on the zeolites acidity was assessed by NH3-TPD and FTIR assisted pyridine adsorption. Employing CO as a probe molecule, the nature of metallic surface sites and different Co species in the catalysts were studied by DRIFTS. Reducibility of the catalysts were evaluated by TPR(H2) and quasi in-situ EXAFS.

FTS experiments were performed in a parallel six-flow lab-scale unit [6]. Acid catalyzed reactions were carried out in a continuous flow fixed-bed reactor, employing n-hexane (n-C6) as a hydrocarbon model compound.

Desilication results in pore sizes and volumes similar to the amorphous SiO2, while acid treatment removes the produced extra framework aluminum, preventing the formation of cobalt aluminates. TEM analyses show that the spatial distribution of Co inside the mesopores of hierarchical zeolite is similar to that in the amorphous SiO2. Time-on-stream (TOS) evolution of cobalt-time-yield during 140 h of reaction demonstrates that stability of the zeolite supported catalysts in terms of CO conversion is comparable to that of the conventional Co/SiO2. Catalytic activities of Co/mesoH-USY and Co/mesoH-ZSM-5 are similar and higher than those of Co/H-ITQ-2 and Co/SiO2 catalysts. The trend in FTS activities can be attributed to the active phase, i.e. smaller Co crystallites over the zeolite supports.

A detailed catalyst performance evaluation (in FTS and n-C6 conversion) with a thorough characterization of acidity reveal that: (i) mesoH-USY has a low density of weak acid sites which are not capable of catalyzing the hydrocarbon conversion reactions at low-temperature FTS (LTFT) conditions. Therefore, Co/mesoH-USY shows only the FTS functionality similar as Co/SiO2, but due to a lower chain growth probability (α), its product distribution is shifted to lower hydrocarbons. (ii) H-ITQ-2 has a high density of acid sites active for isomerization. Thus, Co/H-ITQ-2 combines both FTS and acid functionalities and indeed iso-to-normal C4 ratio over this catalyst is higher than that over Co/mesoH-USY and Co/SiO2. Branched hydrocarbons may not participate in the chain propagation as effectively as the linear ones, further decreasing the chain growth probability. Although wax production can be eliminated at a lower α, this will lead to increased selectivities towards C1 and C2–C4, which are less desired. (iii) mesoH-ZSM-5 exhibits a stronger acidity (relative to mesoH-USY and H-ITQ-2) resulting in activity for both isomerization and hydrocracking at LTFT conditions. In this way, hydrocracking of primary FTS products takes place on Co/mesoH-ZSM-5. As a result, the produced fraction of gasoline range hydrocarbons is considerably larger over Co/mesoH-ZSM-5 than that over the other catalysts.

Among mesoH-USY, H-ITQ-2 and mesoH-ZSM-5 supported catalysts, only Co/mesoH-ZSM-5 displays a significant deviation from an ASF product distribution. Hydrocarbon isomerization alone cannot explain a non-ASF distribution, pointing to the crucial role of cracking activity in the performance of bifunctional FTS catalysts.

As compared with the conventional catalyst Co/SiO2, Co/mesoH-ZSM-5 is three times more selective to C5–C11 after 140 h TOS and two times more active, while producing far less wax (C21+). On the other hand, the strong Co-zeolite interaction as revealed by TPR(H2) and quasi in-situ EXAFS results in the stabilization of lower coordinated Co sites (which are characterized by IR assisted CO adsorption) and in a higher selectivity towards methane. n-C6 conversion reactions suggest that the latter is due to increased activity for hydrogenation and hydrocarbon hydrogenolysis reactions at such coordinatively unsaturated Co sites.

Co catalysts supported on hierarchical zeolites show a high and stable catalytic activity in Fischer-Tropsch Synthesis during 140 h time-on-stream. Zeolite acid density and strength are essential parameters to tune the FTS product selectivity towards liquid hydrocarbons. Only strong acid sites, active for hydrocracking at the operating temperature window of Co-based FTS catalysts, give rise to deviations from a conventional ASF product distribution. These results highlight the importance of the zeolite structure in the development of intensified processes for the direct production of liquid fuels from syngas.

Preview Presentation:
Presenter(s):
Sina Sartipi
Once the content has been viewed and you have attested to it, you will be able to download and print a certificate for PDH credits. If you have already viewed this content, please click here to login.

An Activity Report on the Newly Formed ISA 5.9 Subcommittee on the PID Algorithm
Have your ever made a reference to the âISA Standard Form of the PID algorithmâ? Well guess what, there is no such thing!...
Fouling Monitoring Techniques for Water Treatment Membrane Processes
Membrane fouling and flux decline are undesirable, albeit inevitable, problems in membrane filtration processes for water treatment. The development of low...