Hierarchical Pore Structure Zeolites for the Catalytic Upgrading of Tars 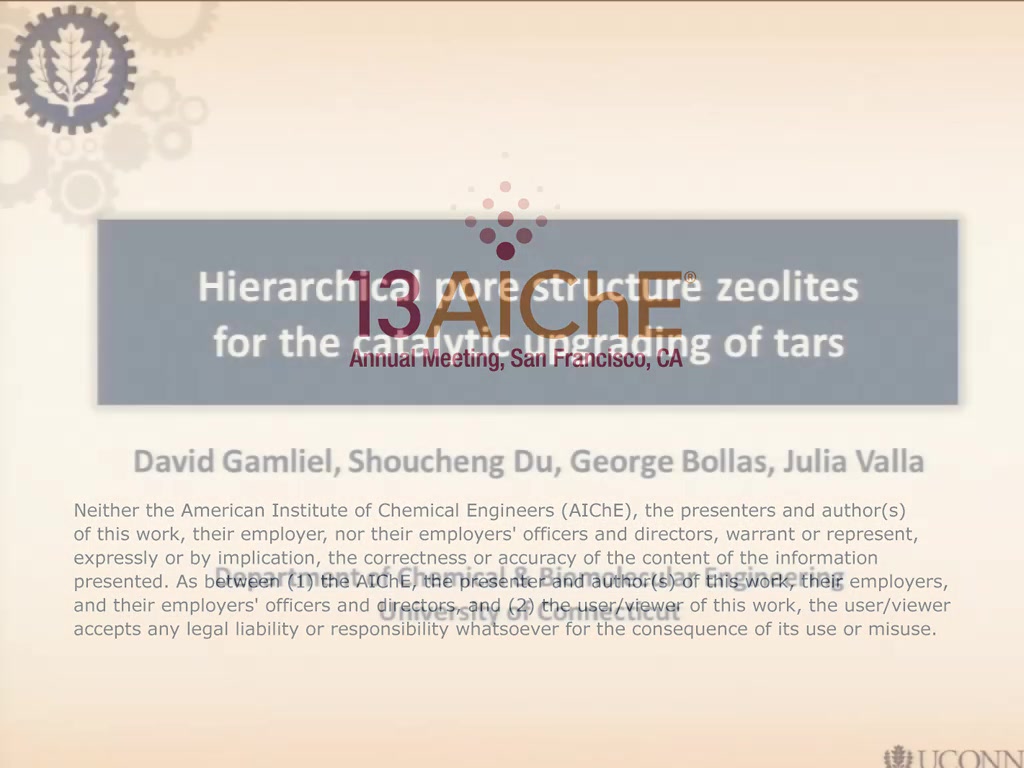 for the catalytic upgrading of tars

Thermochemical conversion of biomass via gasification has attracted increasing scientific interest lately. However, one of the most important technical barriers towards the successful commercialization of biomass gasification is the efficient removal of impurities present in the synthesis gas (syngas), like tars. Tars are a complex mixture of light and heavy molecular weight Poly-Aromatic Hydrocarbons (PAH). PAHs deactivate catalysts, cause blockages in transfer lines, damage downstream units and lower the overall process efficiency. Moreover, due to their carcinogenic nature, the disposal of tars is impossible.

Modifying the gasification operation parameters can affect and potentially reduce the tars content in the syngas, while newly developed entrained flow gasifiers produce almost no tars, but require very flexible designs and are associated with high capital cost. Downstream thermal cracking is another way to reduce tars. However, it involves heating the tars to very high temperature (1000°C). Catalytic cracking of tars appears to be one of the most promising options for tars reduction, because it has the potential to convert tars into lighter hydrocarbons, which can later be reformed to valuable syngas.

Zeolites are microporous materials that have the potential to catalytically eliminate tars from syngas. Zeolites exhibit a unique network of properties like acidity, microporosity and shape selectivity. For this reason they are extensively used during the Fluid Catalytic Cracking (FCC) Unit, where heavy hydrocarbons are cracked into lighter valuable products, like gasoline and diesel. Notwithstanding the positive effect of the presence of micropores with respect to shape selectivity, the zeolite micropore structure may often induce a negative effect due to the low diffusion rates of heavy molecules into the zeolite crystals, as well as unwanted adsorption effects of the reactants and/or products that can lead to the formation of coke.

The aim of our research is twofold: a) to test the effectiveness of zeolites for tars cracking, and b) to modify the zeolites in order to create hierarchical pore structure network that will reduce the diffusion limitations of the heave PAHs in and out of the zeolite pores, hence improving their cracking reactions.

Model compounds, representative of the tars mixture, have been used during this study including: benzene, naphthalene, fluoranthrene and coronene, as they are the most abundant compounds in the groups of light PHA and heavy PHA. The structure of the above model compounds is shown in Figure (1).

In Figure (2) the experimental set up for the tars cracking tests is shown. 5 gm of each model compound is placed in a stainless steel vessel and heated up just below its boiling point. Nitrogen is bubbled through the liquid compounds and picks up the model compound. This mixture then passes over the catalyst bed (0.5 gm), which is held in a quartz tube reactor (7mm ID). The reactor is placed in a furnace for the catalytic cracking experiments. Two different temperatures have been tested (625oC and 700oC). Stainless steel piping is used to withstand the high system temperature. The piping is heat taped to avoid tars condensation inside the system. The products are passed through a train of impingers, which contain isopropanol as a solvent. The solvent dissolves the heavy tars, which are then analyzed using a GC equipped with Simulated Distillation and GC Mass Spectroscopy. The gas is analyzed using GC equipped with Thermal Conductivity Detector (TCD). 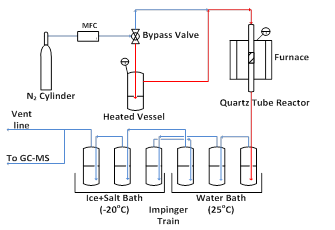 In this study ZSM-5 and Y zeolites obtained from Zeolyst International were used. Hierarchical mesoporous zeolites ZSM-5 and Y zeolites were prepared by sequential alkaline-acidic treatment [1]. During the treatment, the ammoniated form of the zeolite is calcined at 550oC to obtain the protonated form. This zeolite is then subjected to treatment with NaOH (30 ml/g of zeolite) at 65oC for 30 min. The suspension is quenched, filtered, washed till neutral pH and dried. The powder is then treated with HCl (100 ml/g of zeolite) at 65oC for 6 hrs. It is again filtered, washed and dried. The product is then ion-exchanged 3 times with 0.1N NH4NO3 for 12 hrs each. The resultant suspension is again filtered, washed and dried and then calcined at 550oC. The materials were characterized using X-ray Diffraction (XRD) and N2 adsorption. The coke deposited on the catalyst after the cracking experiments was analyzed using Thermogravimentric Analysis (TGA).

N2 adsorption of the parent Y and ZSM-5 zeolites, as well as the various mesoporous USY and mesoporous ZSM-5 are shown in Figure 3. There are two important observations: 1) the concentration of the alkaline media (NaOH) plays a key role on the extent of the desilication of the zeolites and consequently on the introduction of mesoporous and the destruction of microporous structure of the zeolites, and 2) the acid treatment after the alkaline treatment (desilication) is a necessary step that helps to the unblocking of the microporous due to the formation of extra framework aluminium [2]. Based on the N2 adsorption results, it has been revealed that the optimum conditions for maximum mesoporosity incorporation and microporosity retention is 0.1M NaOH/0.02M HCl and 0.2M NaOH/0.02MHCl for the USY and the ZSM-5, respectively. 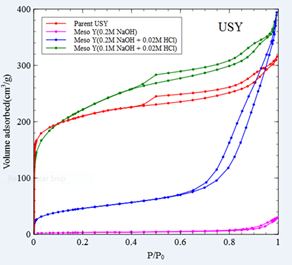 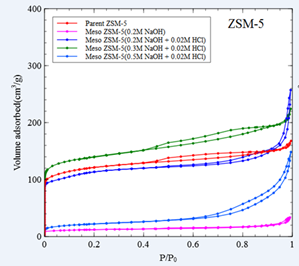 Figure 3.  N2 adsorption/desorption curves for the parent and the mesoporous USY and ZSM-5 zeolites

Catalytic cracking experiments have been conducted using both benzene and naphthalene. Benzene is the smallest aromatic hydrocarbon, while naphthalene is the smallest PAH. In Figure 4 the benzene conversion to gas, liquids and coke at two temperatures (625oC and 700oC) using parent ZSM-5 (a), mesoporous ZSM-5 (b), parent Y (c) and mesoporous Y (d) is presented. 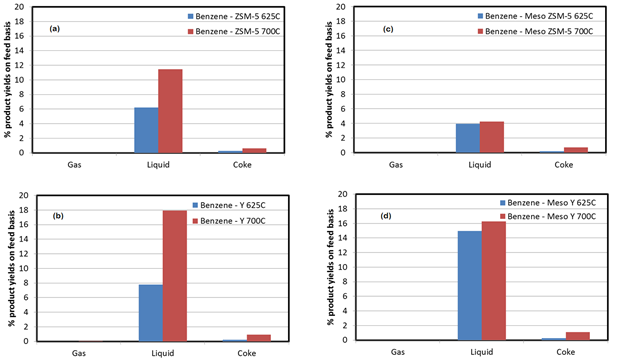 A laboratory experimental set up has been designed and built for the evaluation of zeolites and hierarchical pores structure zeolites on the catalytic cracking of PAHs derived from biomass gasification. Hierarchical pore structure ZSM-5 and Y zeolites have been prepared using the desilication method. Preliminary cracking tests using benzene and naphthalene as model compounds at two different reaction temperatures and using the parent and the corresponding hierarchical zeolites have been conducted and the results will be presented and discussed.

Acknowledgement. The study is funded by the National Science Foundation Award CBET-1236738.

Preview Presentation:
Presenter(s):
Julia Valla
Once the content has been viewed and you have attested to it, you will be able to download and print a certificate for PDH credits. If you have already viewed this content, please click here to login.

Metal-Organic Framework (MOF) Materials and Membranes for Molecular Separations
This talk will describe our recent progress in the synthesis and processing of MOF/ZIF materials for molecular separation applications, and their subsequent...
Inducing Cellulase Activity of Microbulbifer Hydrolyticus Using Hot-Water Wood Extract As Substrate
This study used wood extract from Paulownia elongata (WE) and hydrolisate of sugar maple (hydrolysate) produced during hot-water extraction as substrates to...