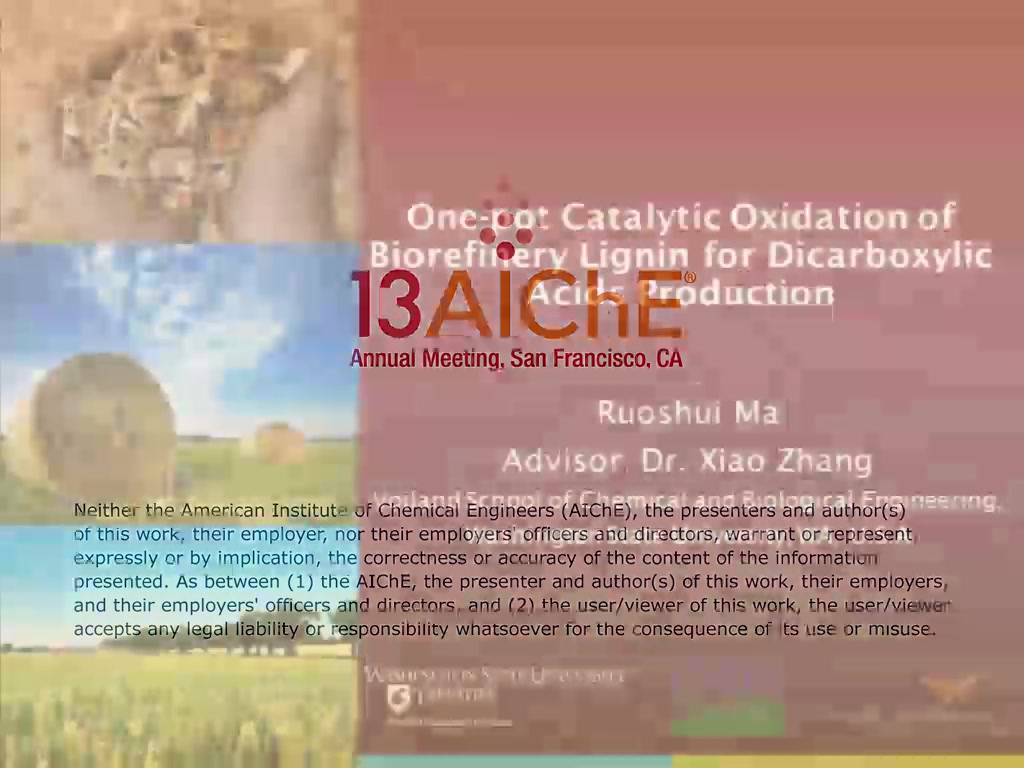 Directly production of dicarboxylic acid from biorefinery lignin is introduced as one new direction of lignin conversion to value-added chemicals , especially dicarboxylic acids. A mild condition oxidation of lignin phenolic units over catalyst is suggested to be a promising pathways to form ring-opened products , such as muconic acid , malonic acid , and succinic acid. Lignin is the largest volume renewable feedstock that contains aromatic rings , whose application is nowadays still limited to thermovalorisation processes. Its potential as a source of valuable phenolic in the production of value-added chemicals in alternative to petrol chemistry is largely unexpoloited. In contrast to most previous literatures , industrial and biorefinery lignin , instead of lignin model compounds , were tested in this study. We also focused on developing a green conversion technology which eliminates the use of hazardous chemicals , harsh reaction condition and high capital-cost equipment. Oxidative catalytic process provides alternative and perhaps much more economically viable route compared to reduction pathways to convert lignin to precursors for hydrocarbon fuel and bioproducts production. In this study , we introduce an aqueous phase oxidation of various biorefinery lignins over a class of chalcopyrite catalysts to directly produce dicarboxylic acid. A clear combination of two stage reactions , including depolymerization and oxidative aromatic ring cleavage , is observed. For example , diluted acid treated corn stover is depolymerized into mixture of lignin monomeric fragments , including benzoic acid derivatives , cinnamic acid derivatives , and hydroquinone. In the second stage , a mixture of succinic acid , malonic acid , maleic acid and malic acid , makes up to 87% in final effluence determined by GC-MS. Dimer and monomer study of gives the similar results which confirmed the occurrence of aromatic ring-cleavage reactions as the source of dicarboxylic acid generation. With deeper understanding of reaction mechanisms , we suggest that various lignin units lead to different reaction pathways , and also results. P-hydroxyphenyl units , in which hydroquinone derivatives work as the intermediates , are likely to form maleic acid and malonic acid from the ring cleavage of p-quinone structure. In another way , guaiacyl units tend to produce maleic acid and succinic acid as the final products mediated by the formation of muconic acid as the precursor from ring-opened mechanism. In conclusion , we believe the chalcopyrite structured catalysts could selectively convert lignin into dicarboxylic acid in a ring-opened mechanism.

Preview Presentation:
Presenter(s):
Ruoshui Ma
Once the content has been viewed and you have attested to it, you will be able to download and print a certificate for PDH credits. If you have already viewed this content, please click here to login.