Heterogeneous Catalysts in the Dehydration of Fructose to HMF 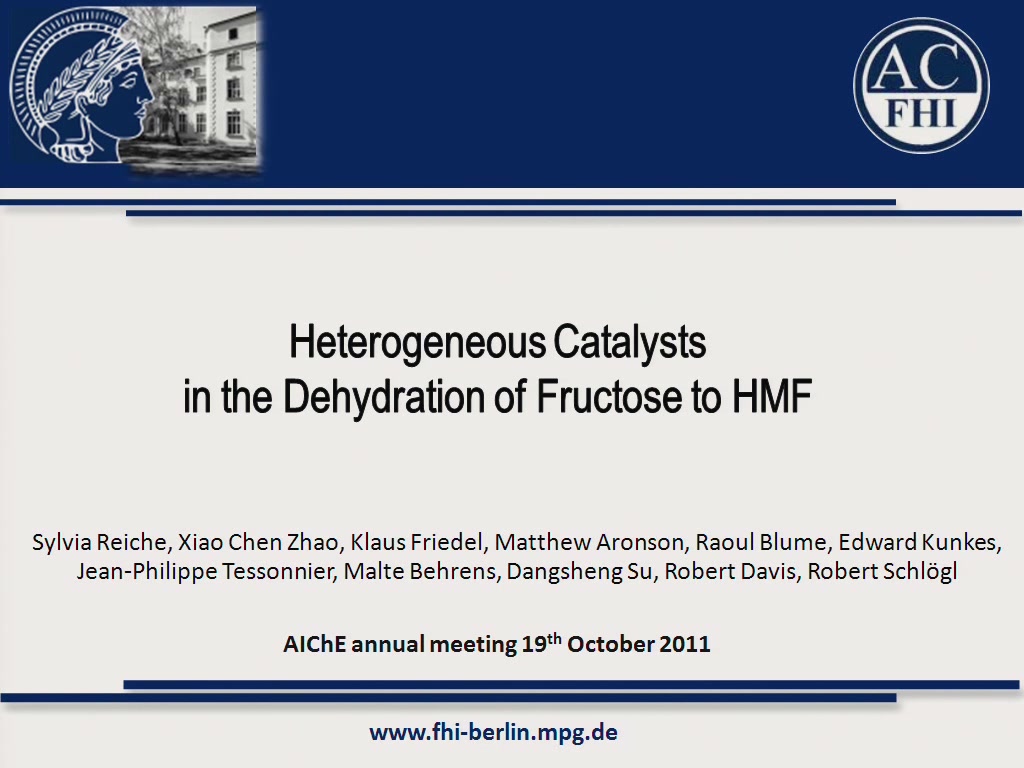 Several crucial steps in the upgrading of biomass-derived raw materials involve acid catalyzed reactions, such as the hydrolysis of cellulose or the dehydration of sugars. Although heterogeneous catalysts are desired in large scale industrial processes, their application is limited by several challenges concerning the conversion of these highly functionalized feedstocks.

In our work, we tested a wide range of heterogeneous acids for the dehydration of fructose into 5-hydroxymethyl furfural (HMF) in 2-butanol solvent. The main focus was on carbon based catalysts, due to their structural diversity and hydrothermal stability. The amount of acidic functional groups determined by titration varied with the carbon support between 0.1 mmol/g for functionalized multi-walled carbon nanotubes (MWCNTs) and 1.7 mmol/g for amorphous carbon prepared by glucose pyrolysis (AGP). However, tests involving exposure of the catalyst to heated reaction solvent showed that part of the acidic groups is released in the solution (i. e. leaching) and the reaction is subsequently catalyzed at least partly homogeneously. The described leaching phenomenon was observed for all materials tested, including polymer resins, such as Nafion and Amberlyst. In case of functionalized AGP, the system retained 0.42 mmol/g of acid functional groups after four consecutive pretreatments in reaction solvent (2-butanol) at reaction temperature (130°C).

A second aspect of catalyst deactivation is the surface poisoning by secondary polymerization products, i. e. humins. This phenomenon was further investigated by comparing the activity towards dehydration of fructose with activities in a reference reaction, i. e. the esterification of acetic acid with ethanol. The esterification reaction was chosen because this reaction does not show deactivation due to secondary products. Although some systems, such as the pretreated AGP catalyst, were stable and recyclable in the esterification reaction, they significantly deactivated already after the first reaction run of fructose dehydration. The accumulation of secondary polymerization products on the catalyst surface was observed by inter alia scanning electron microscopy (SEM).

In conclusion, different deactivation mechanisms were identified for the use of heterogeneous catalysts in the dehydration of fructose. The leaching of functional groups can be suppressed by suitable pretreatments of the catalysts. Adsorption studies suggest that solvent choice can influence the extent of humin accumulation. However, a thorough recycling requires calcinable, hydrothermally stable catalysts.

Preview Presentation:
Presenter(s):
Sylvia Reiche
Once the content has been viewed and you have attested to it, you will be able to download and print a certificate for PDH credits. If you have already viewed this content, please click here to login.

Changes in Lignin Structure after Autohydrolysis Pretreatment Analyzed By Quantitative NMR Techniques
The economic success of a lignocellulosic biorefinery is highly sensitive to the final price at which the lignin residue can be sold for at market. To identify...
Catalytic Activity of Zeolite H? for the Production of Biofuels in Microwave Irradiated Reactor
Biofuel is one type of alternative renewable fuel, which has minimal toxicity or non-toxic and environmental friendly. Green and renewable sources of biomass (...