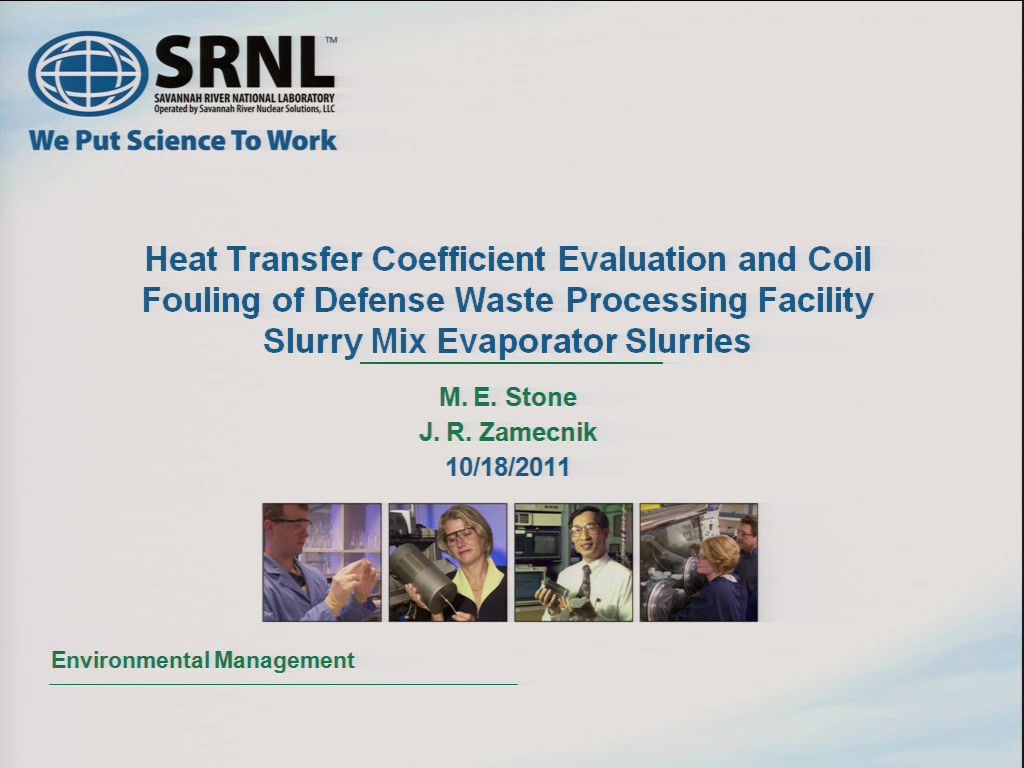 The Defense Waste Processing Facility (DWPF) at the Savannah River Site vitrifies High Level Waste (HLW) for repository internment. DWPF has been processing radioactive waste since March 1996 to produce over 3,000 canisters filled with HLW glass. Progress towards processing all of SRS’s HLW sludge, consisting of four major steps: sludge washing, pretreatment, vitrification, and canister decontamination/sealing. Salt waste is pretreated in separate processes prior to being fed to DWPF and blended with the sludge waste during melter feed pretreatment.

Sludge waste consists of insoluble metal hydroxides (primarily iron, aluminum, calcium, magnesium, manganese, and uranium) and soluble sodium salts (carbonate, hydroxide, nitrite, nitrate, and sulfate). The particle size of the solids is typically 1-20 microns and the resulting slurry behaves as a Bingham Plastic. Sludge washing is performed to reduce soluble salts to ~1M (sodium basis) by allowing the solids to settle, decanting as much supernatant as possible, and then diluting the remaining supernate with water. This process is repeated until the targeted supernatant concentration is reached.

The pretreatment process in the Chemical Processing Cell (CPC) adds nitric and formic acids to the sludge to lower pH, destroy nitrite and carbonate, and reduce mercury and manganese in the Sludge Receipt and Adjustment Tank (SRAT). Acidification of the sludge also allows higher solids concentrations to be processed by lowering the yield stress of the sludge. Glass formers are added and the batch is concentrated by boiling to the final solids target (~45 wt% total solids) in the Slurry Mix Evaporator (SME). During these processes, hydrogen can be produced by noble metal catalyzed decomposition of excess formic acid. The ratio of nitric to formic acid is adjusted to target a glass pool with 20% of the iron having a valence of 2. Pretreated salt waste is sent to DWPF in dilute slurries and aqueous streams. The water added by these streams is boiled off during the SRAT cycle.

The SME is heated with steam coils that are tightly wrapped in the vessel to allow remote installation and removal. During recent processing, fouling of the coils reduced the boiling rate in the SME process to very low levels, leading to the replacement of the coils. Laboratory studies were performed to evaluate processing conditions that could have led to the fouling noted on the steam coils. The results from these studies will be discussed.

Preview Presentation:
Presenter(s):
Michael E. Stone
Once the content has been viewed and you have attested to it, you will be able to download and print a certificate for PDH credits. If you have already viewed this content, please click here to login.