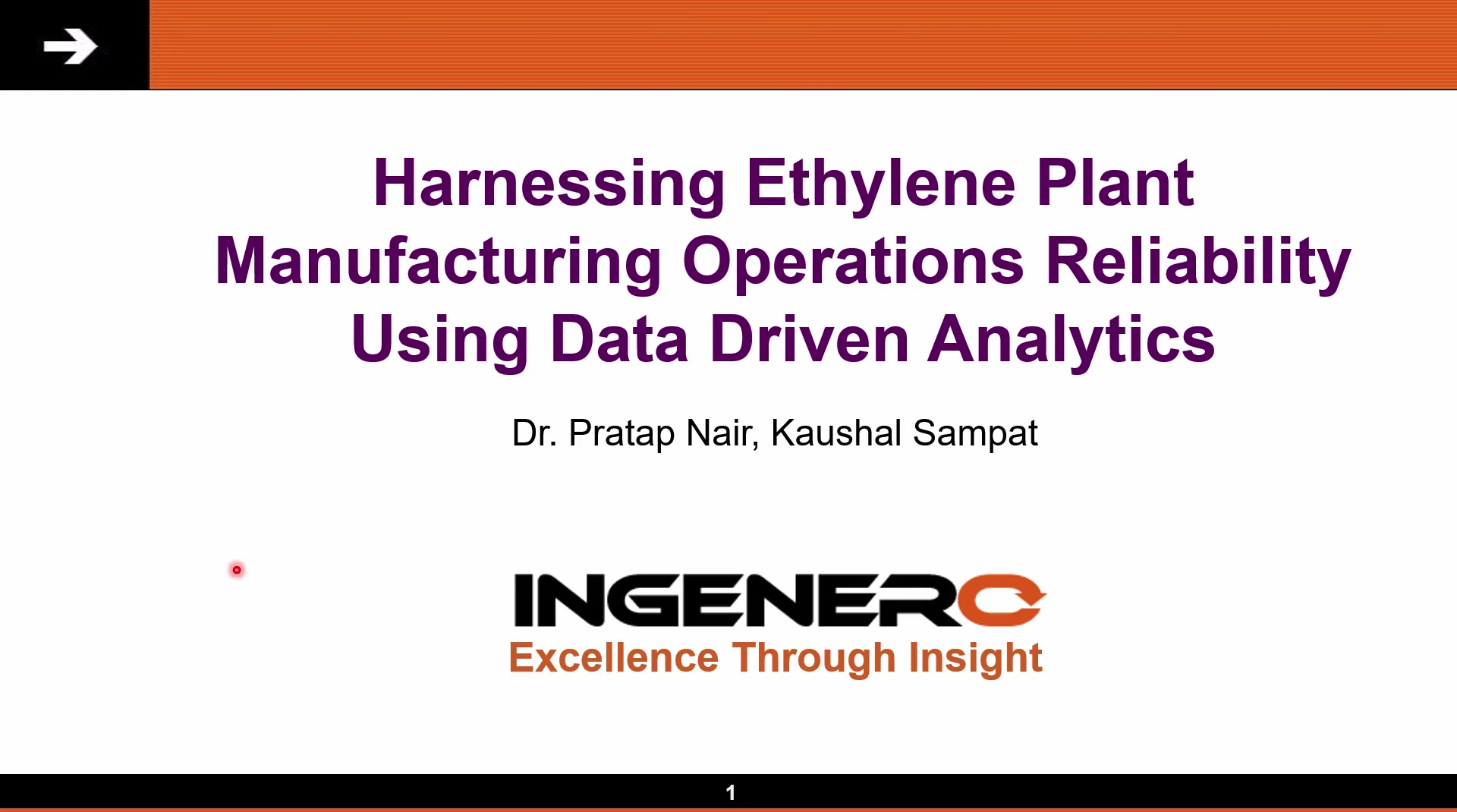 Availability of the Ethylene plant asset is an important factor that determines the Overall Manufacturing Asset Effectiveness. It is not uncommon for advantages realized from optimization and advanced controls, to get wiped out by an unforeseen plant shut down. Retro analyses of such Reliability issues have often shown that the root cause of the issue almost always exhibits symptoms way before the event. However, capturing such symptoms before it is too late and proactively addressing the issues are critical for Asset Reliability Improvement.

The symptomatic indicators reside in the large volumes of a variety of data that is measured on a continuous basis from the manufacturing operation and archived. However, identifying such symptoms is difficult and time consuming for the unaided human mind, unless it shows up obviously on a commonly monitored parameter. Such identification would entail sifting through thousands of a wide variety of data points, collected at minute wise or higher frequencies. Several of these parameters measured are non-linearly related to one another, further complicated by different types of errors in the collected data.

Big Data Analytics techniques can be utilized to help effectively analyze thousands of minute wise tag data for an Ethylene plant, in real time, to help â€œfind problems before they find youâ€. This paper describes how Machine Learning Techniques have been applied to Ethylene Manufacturing to provide useful, non-intuitive insights that are usually hidden in the large volumes of data collected. When carefully integrated with fundamental process models and combined with domain knowledge, it helps identify symptoms well in advance and allows for Root Cause Analysis to be done before it precipitates as a Reliability issue. The integrated approach is essential to minimize alerts on â€œfalse positivesâ€, which is important for the sustained utilization of such an application.

The multivariate nature of these techniques makes this approach different and more effective than the traditional Statistical Process Control (SPC). Sixteen Unit operations have been identified as common areas prone to unforeseen reliability issues in the Ethylene Plant. These techniques have been effectively hooked to live plant data for effective Reliability monitoring and automatic outlier identification, with focus on the sixteen identified areas. Also, coupling this with vendor equipment performance curves and fundamental predictive models, allows for live comparison of the equipment performance with its design. Commonly occurring failures can be predicted early based on pattern recognition using failure maps and signatures. Not so commonly occurring failures are also identified with indicators that allow basic engineering analysis to predict possible reliability issues.

Case examples in Ethylene plants where these techniques have enabled early identification of possible anomalies; causes of possible failures and increased equipment effectiveness are described in this paper.

Preview Presentation:
Presenter(s):
Pratap Nair
Once the content has been viewed and you have attested to it, you will be able to download and print a certificate for PDH credits. If you have already viewed this content, please click here to login.

Infiltration Hazards for Building Siting Studies
While facility siting studies have been a requirement for many years, specifically for facilities that must comply with OSHA’s PSM program, only recently has...
Enhancing Integrity Management of Aging Assets Using Risk-Based Methodologies to Improve Cost, Safety, and Productivity
Managing assets, in any industry, optimally has become crucial for organizations to stay competitive in todayâs global market. Industries are...