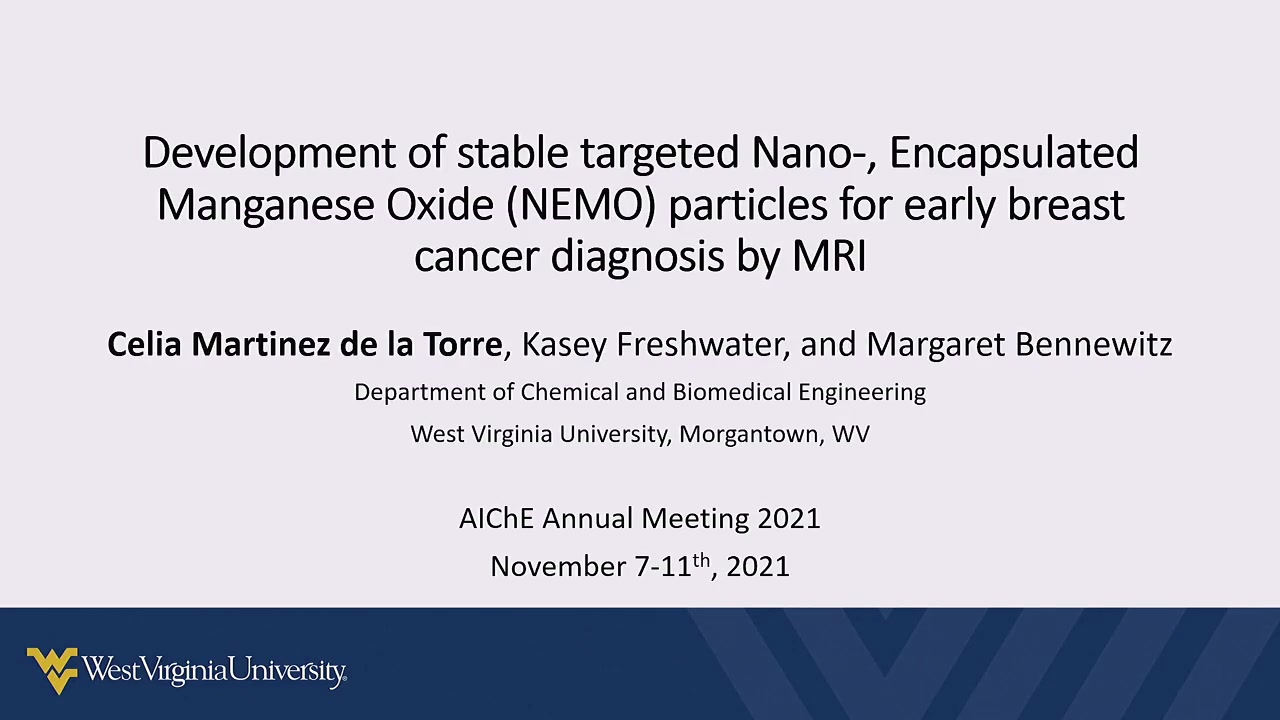 The ultimate goal of this research project is to develop a novel contrast agent to reduce the number of false-positive and false-negative imaging results associated with current breast cancer imaging techniques. Gadolinium chelates are the current clinically approved contrast agents for breast magnetic resonance imaging (MRI), but they are always â€œonâ€ and highlight any vascularized structure. Due to their lack of targeting, both benign and malignant breast tumors are enhanced with gadolinium, resulting in high false-positive rates up to 25%. By utilizing tumor-targeted pH-sensitive manganese oxide (MnO) nanoparticles, a contrast agent can be developed that will only turn â€œonâ€ after internalization into cancer cells and dissolution within low pH endosomes/lysosomes.

To enable specific uptake by cancer cells, a tumor-targeting peptide against underglycosylated mucin-1 (uMUC-1) was attached through click chemistry using copper (I) as the catalyzer. The uMUC-1 targeting peptide conjugated NEMO particles were characterized with DLS and a fluorometric assay to assess hydrodynamic size (~180 nm) and correct targeting attachment, respectively. For NEMO particles to cause a positive T1 signal on MRI, MnO must dissolve and release Mn2+ at low pH. To evaluate the Mn2+ release and MRI properties, NEMO particles were incubated at 3 different pHs over time including pH 7.4 (blood pH), 6.5 (pH of tumor extracellular space), and 5 (endosome/lysosome pH), and supernatants were evaluated using inductively coupled plasma-optical emission spectroscopy (ICP-OES) and 1T MRI. NEMO particles released the most Mn2+ at pH 5 (~93% at 24 hr), which produced the lowest T1 value with the brightest MRI signal at the first two time points (848 ms at 1 hr, and 886 ms at 2hr, pH 5). The substantial MRI contrast generated after just 1-2 hours indicates that NEMO particles can result in a measurable contrast change within clinically relevant time frames.

To assess in vivo stability and toxicity, different dosages of tumor-targeted NEMO particles (15, 7.5, 3, and 1.5 mg Mn/kg) were injected once a week for three weeks into BALB/c female mice. Weight, behavior, and appearance were scored daily to measure toxic effects. Only the highest dosage, 15 mg Mn/kg, had an impact on mouse weight during the first 24 hr (~1 g weight loss), and resulted in a slight decrease in natural and provoked behavior; mice regained weight and normal behavior within 2 to 3 days post-injection. Based on these results, overall NEMO particles were well tolerated in vivo over 3 weeks. In future studies, 7.5 mg Mn/kg will be utilized to maximize Mn dose for enhanced MRI signal while avoiding the weight and behavioral effects associated with 15 mg Mn/kg. Future work includes further in vitro studies of NEMO particle cell labeling and toxicity, along with in vivo MRI of tumor-bearing mice to assess the specific detection of malignant versus benign breast tumors with NEMO particles.

Preview Presentation:
Presenter(s):
Margaret Bennewitz
Kasey Freshwater
Celia Martinez de la Torre
Once the content has been viewed and you have attested to it, you will be able to download and print a certificate for PDH credits. If you have already viewed this content, please click here to login.