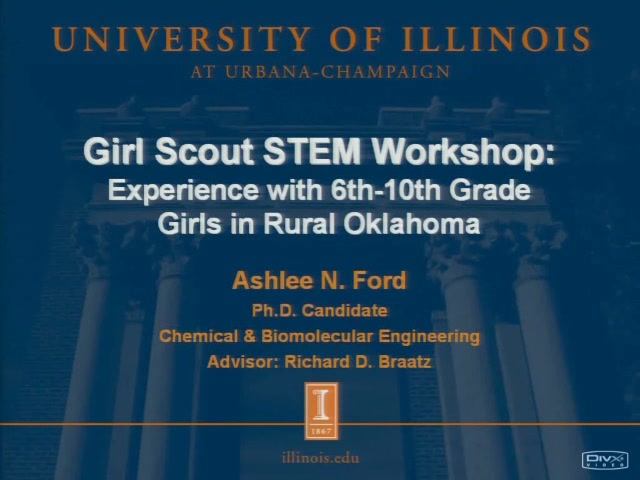 Recently, Girl Scouts of the U.S.A. has launched a science, technology, engineering, and math (STEM) initiative to engage girls in hands-on activities that make STEM fun and accessible and to promote gender equity in these fields by providing information and experiences highlighting the positive aspects which make careers in STEM fields attractive rather than just focusing on the need for science and math skills. On November 26, 2008, I led a STEM workshop in Altus, OK through Girl Scouts of Western Oklahoma Council. Seventeen girls aged 11-16 from five southwestern Oklahoma schools participated in the seven hour event focused on promoting interest in chemistry and engineering. The girls were students in towns and rural communities with populations ranging from 16 to 21,500. Only 3 of the girls said that they had any prior knowledge of engineering applications and careers. This is not surprising as western Oklahoma does not have a lot of engineering jobs. The students consisted of three African American girls, 1 Native American girl, and 13 Caucasian girls. Two of the girls had learning impairments (ADHD and autism). The majority of the students were in the 7th and 8th grades (the advertised target group for the event) with just two students each in 6th and 10th grades.

I introduced the engineering design process and explained different engineering disciplines to the girls. The girls formed teams and did some team building activities before moving to the engineering activities. The first engineering challenge was to work in teams to build 8-inch tall tables out of newspaper and masking tape. Information about this activity can be found on the PBS Design Squad Web site (http://pbskids.org/designsquad/projects/paper_table.html). The girls were very creative with this and were able to build very solid structures incorporating ideas about strength of materials. Next, the girls made water filtration systems using two liter pop bottles to explore concepts of wastewater treatment. Guidelines for this activity can be found on the PBS kids Web site (http://pbskids.org/zoom/activities/sci/waterfilter.html). On their evaluations of the event, several girls made comments about the usefulness of learning to filter water. They could see how this type of engineering application makes a difference in their lives everyday.

After a social lunch with team members, the girls had two more activities. They first designed rubber band cars with CDs and cardboard according to the activity guide directions supplied on the PBS Design Squad Web site (http://pbskids.org/designsquad/projects/rubber_band_car.html). No group was able to successful construct a car that would actually operate according to the design. Students responded to this activity on their surveys saying they learned to Take Action “by never giving up” and “by trying to do things I think are impossible.” The day's final event was an egg drop competition. The girls were given marshmallows, spoons, straws, masking tape, popsicle sticks, and a zip top bag. They had to protect two eggs at one time, and the contraptions were dropped off the top of the football bleachers (about 30 feet). The girls loved this activity as they got to be creative, and they were eager to test the performance of their egg safety designs.

Fourteen girls and six adults were surveyed at the conclusion of the event. Rating scale questions included “How much did you know about science and engineering before today?”, “How interested were you in pursuing careers in science and engineering fields before today?”, “How much have your opinions about science and engineering changed as a result of this workshop?”, “How interested are you in exploring opportunities for careers in science and engineering fields now?”, and “How much did the volunteers positively contribute to your experience today?”. The rating scale answer choices were “a lot,” “some,” “a little,” and “none.” Participants were also asked to evaluate the specific activities of the day with a five-point rating scale. Open-ended questions were also given on the survey in order to obtain any other feedback the students or adults had about the event. The open-ended prompts included favorite and least favorite things about the event, ideas for what to add to or remove from the event in the future, things learned the event that could be used in the participant's future, and additional comment free-response. GSUSA has recently a new leadership development strategy for Girl Scouts focused around three themes: Discover, Connect, and Take Action. These themes were incorporated into the survey through the following questions: “What did you Discover about yourself or the world around you today?”, “In what ways did you Connect with others today?”, and “How can you Take Action with ideas that were discussed today?”. The main results of the ratings portion of the survey were that most of the girls expressed increased interest in engineering and science careers as a result of the workshop. Three girls indicated that they had no interest in engineering careers and had no change in their career interests. The sample size was very small for this survey so it should be repeated with a larger group of students and with an open-ended question asking students why they chose their level of interest in science and engineering careers (e.g. not interested because already focusing on some other career field, particularly for older girls). Responses from the open-ended questions included the following statements: “some things you think are boring are fun,” “new things are fun to try,” “[I can Take Action] by becoming an engineer,” “[I Discovered about myself that] I can be an engineer,” and “[The event] was awesome!”. These responses affirm the observation that the girls seemed to enjoy themselves and to be more motivated and interested in exploring science and engineering as a result of the event. Other student responses like “I learned to use teamwork” and “I learned to communicate with others” and parent/leader responses like “girls actually got involved with each other” and “girls learned the value of teamwork” emphasize the importance of teamwork and positive teamwork experiences.&'

Presentation:
Presenter(s):
Ashlee N. Ford
Once the content has been viewed and you have attested to it, you will be able to download and print a certificate for PDH credits. If you have already viewed this content, please click here to login.
Language:
English

Developing the Next Generation of STEM Leaders
How can engineers and scientists best influence and inspire the next generation of scientific leaders? How can we reach out to the K-12 community to create...
Supporting Others: Students, Society