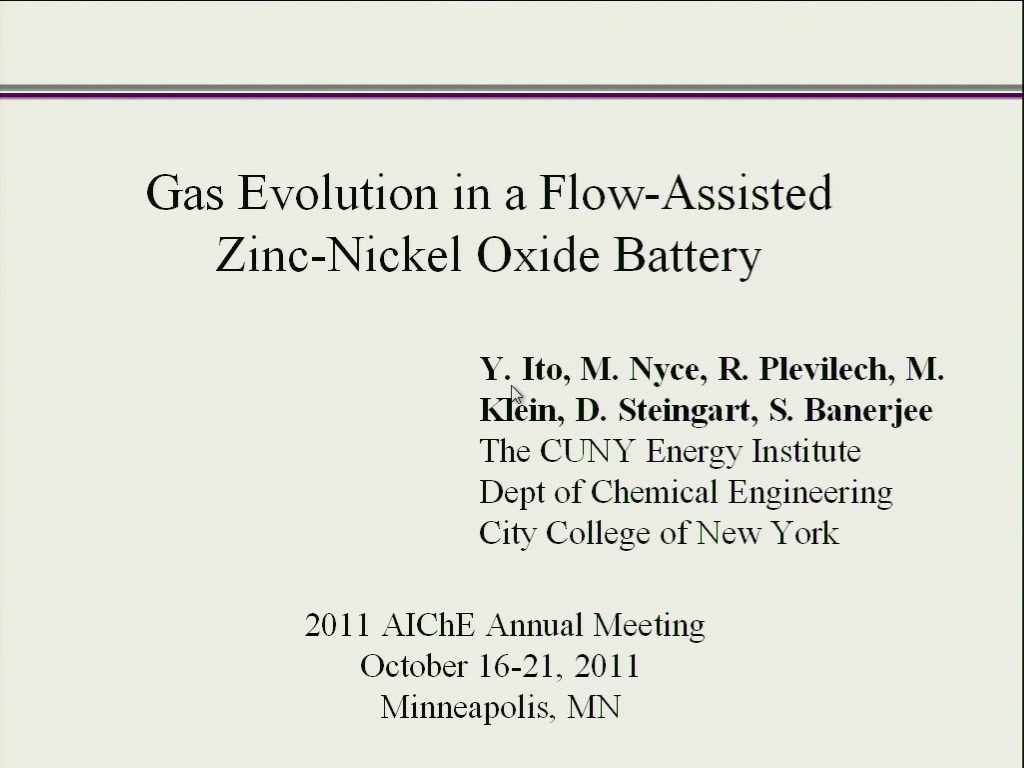 Zinc-based rechargeable batteries are one of the most attractive electrical energy storage systems due to its advantages such as low cost and green. On the other hand, short cycle life due to internal short circuit is the most critical disadvantage. We have carried out experiments in flow-assisted zinc-nickel oxide batteries, and concluded that flowing electrolyte contributes to the modification of zinc morphology and extend the battery cycle life significantly. More than 1500 cycles have been obtained while keeping the Coulombic efficiency at or above 90% by utilizing a deep-discharge reconditioning step every 15 cycles [1].

The loss of Coulombic efficiency is attributed to remaining zinc on anodes on discharge, hydrogen and oxygen evolution occurring as parasitic reaction, and reasons such as corrosion in the sintered nickel electrodes. The extent of gas evolution is determined by the balance of thermodynamics and kinetics of the hydrogen and oxygen, and those of the main reduction-oxidation reactions in the battery. We have conducted experiments on gas evolution in a sealed zinc-nickel oxide battery for with and without flow assisted cases. The effects of flowing electrolyte on gas evolution were quantitatively evaluated and the impacts on battery performances were discussed.

Metal zinc as negative (anode) electrode was deposited on polished nickel coated copper sheets as substrate. Sintered nickel oxide electrode was used as the cathode. The test cell was a prismatic cell which has a capacity of 2.2 Ah. Zinc oxide at a concentration of 60 g L-1 was initially dissolved into 45 wt% potassium hydroxide (KOH) solution as electrolyte. The electrolyte flows from the bottom to the top of the cell at an average velocity of 3 mm s-1 in the flowing case. Evolved gases were accumulated in the head space of the cell. The concentration of the oxygen in the head space was measured by an oxygen sensor. The internal pressure of the cell was measured by a pressure transducer which is also attached to the head space of the cell. Galvanostatic battery cycling experiments were carried out for a charge and discharge rates of 1C and 0.5C, respectively. Charge was terminated when a battery cell was fully charged to the full rated capacity of the sintered nickel oxide electrodes, and discharge was terminated when the cell voltage dropped to 1.0 V.

The results show that, on charge, hydrogen is evolved from zinc (anode) side. Because of the formation of concentration boundary layer and the lower concentration of zinc (zincate) ion near the zinc anodes in the non-flowing case, hydrogen evolution tends to occur more instead of zinc electrodeposition. On the other hand, on discharge, hydrogen can theoretically be evolved from the cathode (nickel oxide). However, from a thermodynamic point of view, hydrogen evolution should not start until the cell voltage drops much lower, near 0 V. Other possibilities are zinc corrosion and that hydrogen evolved on charging is released from voids within the zinc electrodeposit during discharging. Time elapsed images of the zinc anode in a cycle showed that the evolved bubbles on charging, which are presumed to be hydrogen, do not detach from the surface on charging and detach on discharging. Also, there are quite a few bubbles that appear as zinc dissolves on discharging. From a thermodynamic point of view, these bubbles should not be oxygen and, in fact, oxygen in the cell doesn't increase on discharging. Therefore, these are expected to be hydrogen which is generated on charging.

On the other hand, xygen is drastically evolved toward the end of charge for both the cases. This oxygen evolution is from the positive (nickel oxide) electrodes and this phenomenon in zinc–nickel oxide batteries has been reported in many previous works. The results also show that oxygen is evolved more in the non-flowing case than the flowing case. Though we did not compare the differences of crystal structure of the nickel oxide electrodes between the flowing and non-flowing cases, considering that oxygen evolution basically occurs on overcharging, and that electrolyte (KOH) concentrations affect the performance of sintered nickel oxide electrodes, oxygen evolution tends to occur more than the reaction between nickel oxide and hydroxide ion in the non-flowing case, because of the concentration gradient of the hydroxide ion at the electrodes surfaces. On discharging, oxygen is not evolved for both the cases, and the curves rather show a tendency of slight decrease of oxygen in the cell. This indicates that oxygen is slightly recombined on discharging, probably by the reduction on the positive plates.

Preview Presentation:
Presenter(s):
Yasumasa Ito
Once the content has been viewed and you have attested to it, you will be able to download and print a certificate for PDH credits. If you have already viewed this content, please click here to login.