Fuel Processing with Diesel Fuel and Kerosene for APU Applications 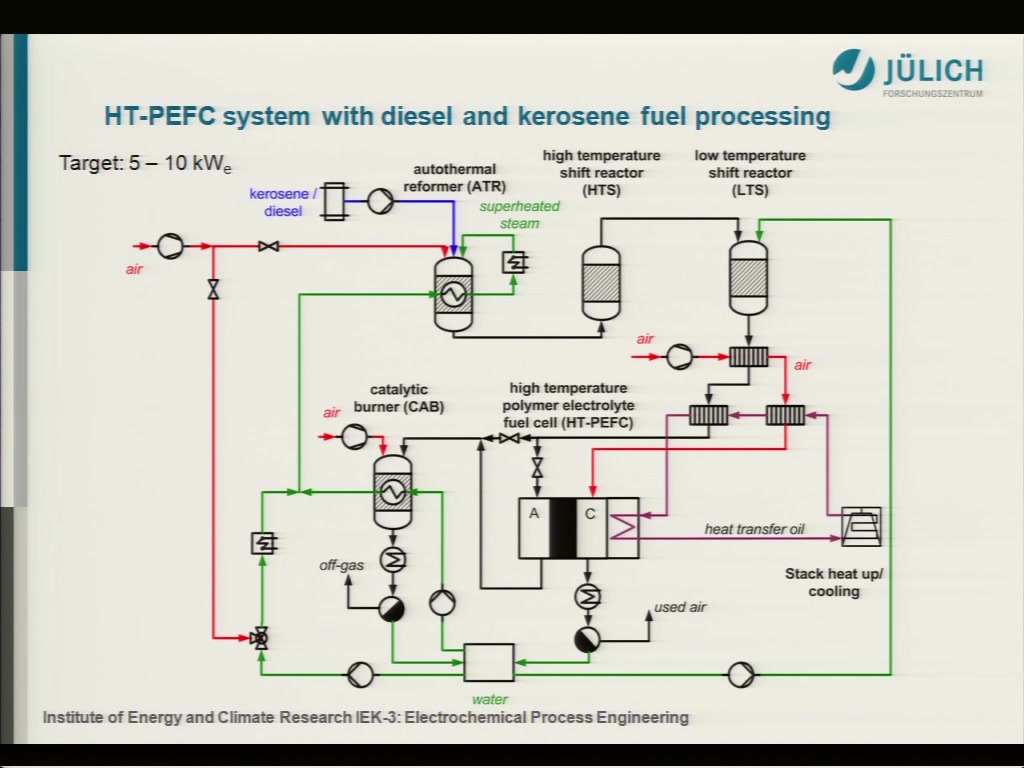 Fuel cell systems constitute a clean and efficient alternative to fuel combustion for generating power for stationary, mobile and portable applications. The aviation industry is intensively pursuing the concept of using fuel cell systems on board aircraft. This would make it possible to undertake particular tasks within the aircraft architecture by means of a single system. The concept is referred to as a multifunctional fuel cell. It aims to dispense with the water tanks and replace the conventional gas-turbine-powered auxiliary power unit (APU) and the tank inerting system in the conventional aircraft architecture. The benefit of this concept is the increase in the overall efficiency of aircraft, the reduction in fuel consumption and ability of the aircraft to operate with low emissions especially on the ground. For truck applications the increasing demand for electrical power when the vehicle stands still has led to an enhanced demand for an onboard electric power generator operating with high efficiency and low emissions.

Of course, it would be most convenient to operate fuel cell systems on pure hydrogen. The enduring lack of an infrastructure for the production, storage and distribution of hydrogen has erased numerous research activities worldwide on fuel processing with special emphasis on the development of fuel processors working on fuels with an existing infrastructure such as natural gas, gasoline, diesel fuel or kerosene. The key characteristic of such fuel processors is their use directly at the stationary or in most cases mobile application.

Fuel processing consists of several steps. The first one is to reform fuel via either steam reforming, partial oxidation or autothermal reforming. The latter is a combination of steam reforming and partial oxidation. In most cases these reactions are catalytically supported. The reformate then has to undergo different additional steps such as desulphurization and CO clean-up using the water-gas-shift reaction and the preferential oxidation reaction (PrOx) before it can be fed into the fuel cell. Fuel processing additionally comprises a catalytic burner, in which the anode-off gas from the fuel cell is combusted. Simultaneously, steam can be generated in the burner to be used for autothermal reforming.

Initially, this contribution explains the actual system architecture for fuel cell systems for APU applications with high temperature polymer electrolyte fuel cell (HT-PEFC) of the Institute of Energy and Climate Research of the Forschungszentrum Jülich GmbH. In its main part this paper introduces, on the one hand, Jülich´s different single reactor components in the 5 – 10 kWe class for autothermal reforming, water-gas-shift reaction and catalytic combustion with their respective design data such as maximum thermal power, volume specific and mass specific power density, gas hourly space velocity of the catalyst, molar ratios of the educts etc. On the other hand, detailed experimental results obtained with these components are presented. For these experiments the autothermal reformer was run with diesel fuel and kerosene. Temperature profiles and outlet gas concentrations of the reactors are presented during start-up, steady state and transient experiments. Thereby, the main focus lies on complete conversion of hydrocarbons in the autothermal reformer to avoid catalyst poisoning in the downstream components (water-gas-shift reactor, fuel cell).

Preview Presentation:
Presenter(s):
Joachim Pasel
Once the content has been viewed and you have attested to it, you will be able to download and print a certificate for PDH credits. If you have already viewed this content, please click here to login.

Enhanced Yield of Bio-Gas Production With Modified Themo-Reactor Configuration and Separation of CO2
Pakistan is currently facing severe energy crisis with significant shortfall. A number of short-term technical solutions are available but are not adequate to...
Synergistic Effect Investigation on Co-Gasification of Chicken Manure and Petcoke
Abstract: Synergistic effect on co-gasification of chicken manure and petcoke was investigated. The gasification characteristic of chicken manure is found to...