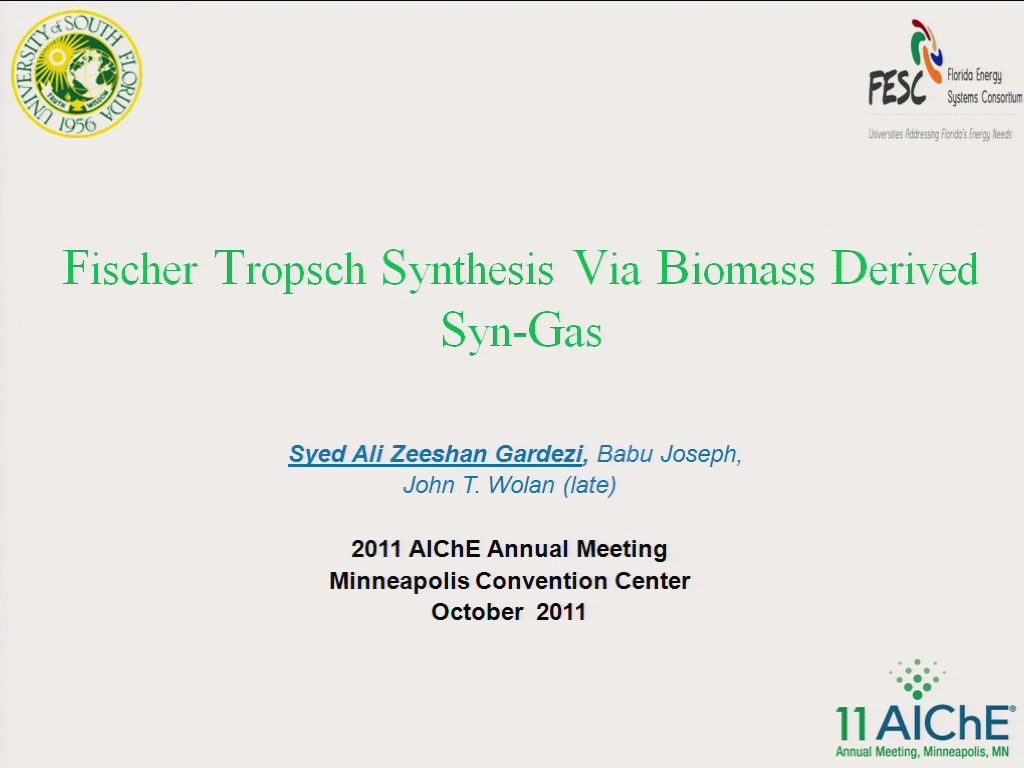 Due to the recent surge in energy costs and uncertainties in fuel prices, there is significant interest in seeking alternative sources of energy particularly from renewable such as biomass. Indirect liquefaction of biomass (via the thermo-chemical conversion to syngas followed by liquefaction via Fischer-Tropsch Synthesis or FTS) offers a commercially viable route for meeting the challenge of producing renewable fungible liquid fuels. Apart from biomass, FTS is also the critical step for converting natural gas and coal to liquid fuels.

A FTS technology has been developed for producing middle distillates (diesel and aviation fuel) by using pine chips as the main feedstock. In this “two step” process, pine chips were subjected to an entrained flow gasification process developed by Pearson et al. [1]. The resulting tar free gas is comprised mainly of carbon monoxide, hydrogen, carbon dioxide, methane and some organic contaminants such as benzene, toluene, and naphthalene along with substantial amount of water. For further liquefaction this gas was cleansed using multiple adsorbents. An inline “Shaw Moisture Meter” was used to continuously monitor the moisture content of the feed to the liquefaction process.

For the production of liquid fuels, eggshell cobalt catalysts were used. Cobalt catalysts have several advantages e.g. they produce linear paraffinic hydrocarbons and minimize undesirable water gas shift reaction. This eggshell design is a well known strategy for producing a narrow hydrocarbon distribution. In this regard previous research work conducted by Iglesia et al. was also consulted [2]. A bench scale fixed bed reactor was used for the conversion of syngas. Modeling of the reactor startup and of adjustment of the reactor packing ensured successful operation resulting in a high conversion and narrow distribution of hydrocarbons in the range of diesel and aviation fuel.

Preview Presentation:
Presenter(s):
Syed Ali Gardezi
Once the content has been viewed and you have attested to it, you will be able to download and print a certificate for PDH credits. If you have already viewed this content, please click here to login.

Economic and Environmental Impact of Biochar Addition on Anaerobic Digestion Process
Anaerobic digestion (AD) technology is becoming a promising pathway for producing clean and renewable natural gas from waste resources. Despite growing...
Pyrolysis Vs. Gasification: Effect of Oxygen In Reaction Atmosphere On Biochar Properties
Since biochar properties can vary widely depending on feedstock and processing conditions, making meaningful comparisons between biochar produced by different...