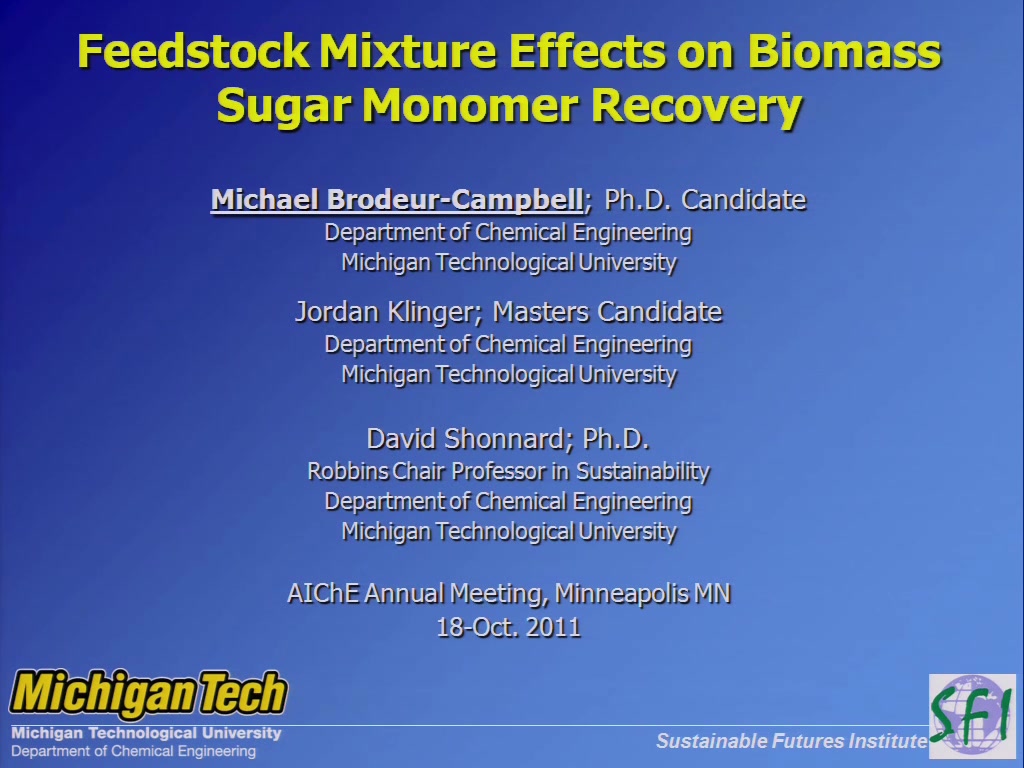 Increased use of lignocellulosic biomass for bioenergy production holds promise for improved domestic energy security, reduced greenhouse gas (GHG) emissions, rural economic development, and developing a more sustainable energy infrastructure [Chum and Overend 2001; Perlack, Wright, et al.  2005; U.S. DOE 2006].  Transportation fuels are especially difficult to replace as their replacement has to have a high energy density, be compatible with existing fuel distribution infrastructure, and be compatible with existing automobile technology.  In 2009, 97% of transportation fuels were derived from fossil sources [EIA 2008], and transportation accounted for one-third of carbon dioxide emissions in 2008 [EIA 2009].  Liquid fuels derived from biomass are particularly attractive as a replacement for fossil-derived transportation fuels.  Cellulose is the most abundant biopolymer on Earth, and lignocellulosic feedstocks represent one of the few natural resources available in sufficient quantity to replace a significant fraction of liquid transportation fuel.

In a commercial biorefinery feedstocks are likely to come from a variety of sources and include many different materials, such as softwoods, hardwoods, agricultural residues, and herbaceous or woody energy crops.  Much work has been done to understand and optimize the pretreatment and enzymatic hydrolysis conditions for pure feedstocks, but little is known about mixture effects on enzymatic hydrolysis.  A primary concern in processing woody biomass to produce a range of biofuels is to maximize the production of desired intermediates, in this case, determining the quantity of monomer sugars that are recoverable.  The biochemical platform as described by the National Renewable Energy Laboratory (NREL) was the process studied.  Briefly, lignocellulosic biomass ? which is composed primarily of hemicellulose, cellulose, and lignin ? is treated with dilute sulfuric acid to hydrolyze the hemicellulose into soluble sugars.  The solid residue remaining after dilute acid pretreatment is then treated with cellulose-degrading enzymes to hydrolyze the cellulose into soluble sugars.  The remaining lignin may be utilized as a high energy co-product stream to provide heat and power for the cellulosic ethanol conversion processes.

This study seeks to clarify the effects of processing mixtures of feedstocks on overall sugar recovery.  We wish to test the hypothesis that sugar yields from mixed feedstocks can be predicted by a simple linear interpolation model based on the behavior of the pure species.  Experiments were performed on pure species (aspen, balsam, and switchgrass), and on 50/50 blends of aspen/balsam and aspen/switchgrass.  Aspen was chosen as a model species due to its high suitability for processing in a commercial biorefinery.  Balsam was chosen to mix with aspen to study the effects of high lignin content on mixed feedstock processing, and switchgrass was chosen to mix with aspen to investigate the effects of a high ash content energy crop.

One-half gram (0.5 g) of dry sample was weighed and placed into one of a set of 9 stainless steel Swagelok cylindrical reactor tubes, and 4.5 ml of dilute sulfuric acid (0.5% w/v) was added to achieve 10% (wt) solids loading in the reactor.  Reactors were rapidly heated to 160°C in a silicon oil bath (Dow Corning 550 fluid), and three tubes were removed from the oil bath at previously determined time intervals.  From previous research involving pure samples of aspen, balsam, and switchgrass (Jensen et al. 2010), the time to achieve maximum yields of monomer and oligomer sugars from combined dilute acid hydrolysis and enzymatic hydrolysis was determined; the ?optimum? time. Three reactors were removed at one-half the optimal time, three reactors were removed at the optimal time point, and the last three were removed at two times the optimal time.  Reactor tubes removed from the oil bath were immediately submerged in an ice-water bath to quench the reaction.  One milliliter of liquid from each reactor was removed, filtered, neutralized, and analyzed on an Agilent 1200 series HPLC for glucose and xylose concentration.  One milliliter of liquid from each reactor was filtered and then further acidified to 4% (w/v) sulfuric acid, and treated at 121°C for one hour to hydrolyze any soluble oligomers into monomer form.  After neutralization these samples were analyzed by HPLC as above.  Results from these two liquid samples were combined into total soluble (monomer plus oligomer) sugar recovery from dilute acid pretreatment.  Solids were washed with excess distilled water on a glass-fiber filter (VWR) and carried on to enzymatic hydrolysis.

Solid residues containing cellulose and lignin were subjected to enzymatic hydrolysis using Accelerase 1500 (Genencore).  Each of the three reactors from the same pretreatment time point were loaded with a different enzyme concentration ? 0.1, 0.25, and 0.5 ml Accelerase 1500 per gram of carbohydrate in the feedstock ? in order to study the interaction between pretreatment severity and enzyme loading on sugar yields.  Reaction conditions were 50mM citrate buffer, pH 4.8, 50°C, 250 RPM orbital shaking.  Liquid samples were removed at 0, 1, 2, and 3 days, filtered, and analyzed for sugar concentrations by HPLC as above.

Maximum yields of xylose from pretreatment were seen to vary with both time and feedstock composition in the expected manner.  Maximum glucose yields following enzymatic hydrolysis were seen to be strongly affected by both pretreatment severity and enzyme loading.  Results are summarized in Table 1 below.

Xylose yields from pretreatment varied from 69-93% of the theoretical maximum.  Pure switchgrass gave the lowest yield and pure aspen the highest.  Each pure species and mixture showed a peak hydrolysis yield near the expected optimal time.  Earlier time points showed incomplete hydrolysis with greater quantities of soluble oligomeric sugars in the hydrolyzate.  Later time points yielded sugar decomposition products such as furfural and hydroxymethylfurfural (HMF) in the hydrolyzate.  Longer pretreatment reaction times always resulted in higher glucose yields, but due to the degradation of xylose at later time points total sugar yields were generally lower for extended pretreatment times.

Glucose yields following enzymatic hydrolysis varied from 2-61% with pure balsam giving the lowest yield and pure aspen with supplemental β-glucosidase giving the highest.  The first aspen experiment was repeated due to incomplete pretreatment (indicated by lower than expected sugar recoveries), and subsequently treated with the highest Accelerase concentration plus supplemental β-glucosidase to study the effect of additional enzyme loading on yield.

Preview Presentation:
Presenter(s):
Michael J. Brodeur-Campbell
Once the content has been viewed and you have attested to it, you will be able to download and print a certificate for PDH credits. If you have already viewed this content, please click here to login.

The Role of Acidic Catalyst Support On the Catalytic Upgrading of Bio-Oils
Catalytic conversion of bio-oil vapor has attracted considerable interest as a promising pathway for upgrading. In this work, the reaction of anisole and...
Cellulose Extraction From Rice Hulls Using Ionic Liquids
Over one fifth of calories consumed by humanity are from rice. Consequently, vast quantities of rice hulls are disposed of as waste, since the hull constitutes...