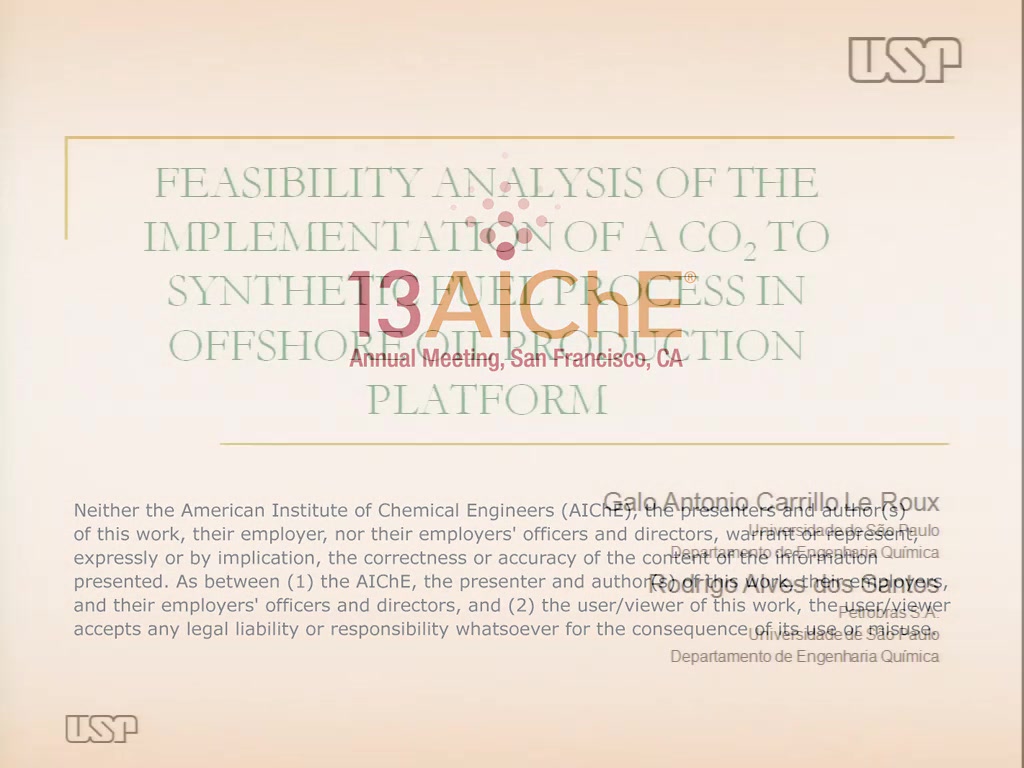 The discovery of a new oil province known as pre-salt, located in the Brazilian coast, represents a new frontier in the world's oil production.

Amongst other challenges involved with the exploration and production in that region, the CO2 concentration at high levels in the fluids of some of those reservoirs has been the most relevant challenge for the companies that explore and produce in that area [2]. This is due to the fact that when the CO2 is found in natural gas at more than a substantial proportion, it may corrode the transport and transfer ducts, along with atmospheric pollution related to the greenhouse effect and gas commerce barriers for not satisfying the requirements of the National Petroleum Agency (ANP), etc. [1]

Once the natural gas is extracted, the amount of CO2 produced can be both injected or stored in depleted reservoirs, saline aquifers and carbon reservoirs or it can be reinjected in production fields of secondary oil recovery [1], being this the model adopted by the platforms responsible for the pre-salt production today.

An alternative to sequestering the CO2 extracted from natural gas is using it as a supply of raw material or as an input to the synthesis of chemical products, especially those with great market demand. From that perspective, the research and the development of processes and technologies that aim the chemical conversion of the CO2produced in oil platforms into products with a higher aggregate value presents itself as an excellent alternative to guarantee the environmental preservation, associated with its profitability obtained from what is considered to be the main cause of global warming.

One of the products that can be obtained indirectly from CO2 is synthetic fuel, produced by the process known as Gas to Liquids, or GTL. In the GTL process, the synthesis gas (H2 and CO) is firstly produced by the reaction of natural gas (CH4) with CO2or water, also known as dry reforming and steam reforming, respectively. Next, the synthesis gas is converted into a mixture of hydrocarbons composed essentially of long-straight chain paraffin hydrocarbons and α-olefins.

In this work the technical, economical and potential feasibility of CO2 capture is analyzed, as well as the production of synthetic fuel using the GTL process, offshore, from carbon dioxide (CO2) and methane (CH4), found in the waste chain of the gas treatment in an oil and gas production platform, through dry and steam reforming, followed by Fischer-Tropsch synthesis.

Thus, based on literature data and on the use of a commercial process simulator, the simulation of the suggested process was developed and different alternatives to the reutilization of the waste chains were analyzed, including the recycling and burning of some effluent streams. Techniques of energetic integration, optimization and economic analysis of process have also been applied.

Preliminary results indicate that it is technically and economically possible to produce up to 500 m3/d of synthetic fuel from effluent CO2 of primary petroleum processing, using GTL, with CO2 conversion yields of approximately 57,5% and a carbon efficiency up to 39%.

Preview Presentation:
Presenter(s):
Rodrigo A. dos Santos
Once the content has been viewed and you have attested to it, you will be able to download and print a certificate for PDH credits. If you have already viewed this content, please click here to login.

Towards Developing Anaerobic Digestion Based Biorefinery – Research On Food Wastes As Feedstock
Anaerobic digestion (AD) is a proven technology for waste treatment. However, as the organic material becomes more valuable and being treated as resources,...
Optimal Design of Transient Microreactor Experiments
Development of synthetic routes for active pharmaceutical ingredient (API) synthesis is increasingly performed using microreactors, because their use can...