Families of Data-Driven Surrogates Based on Accuracy and Complexity 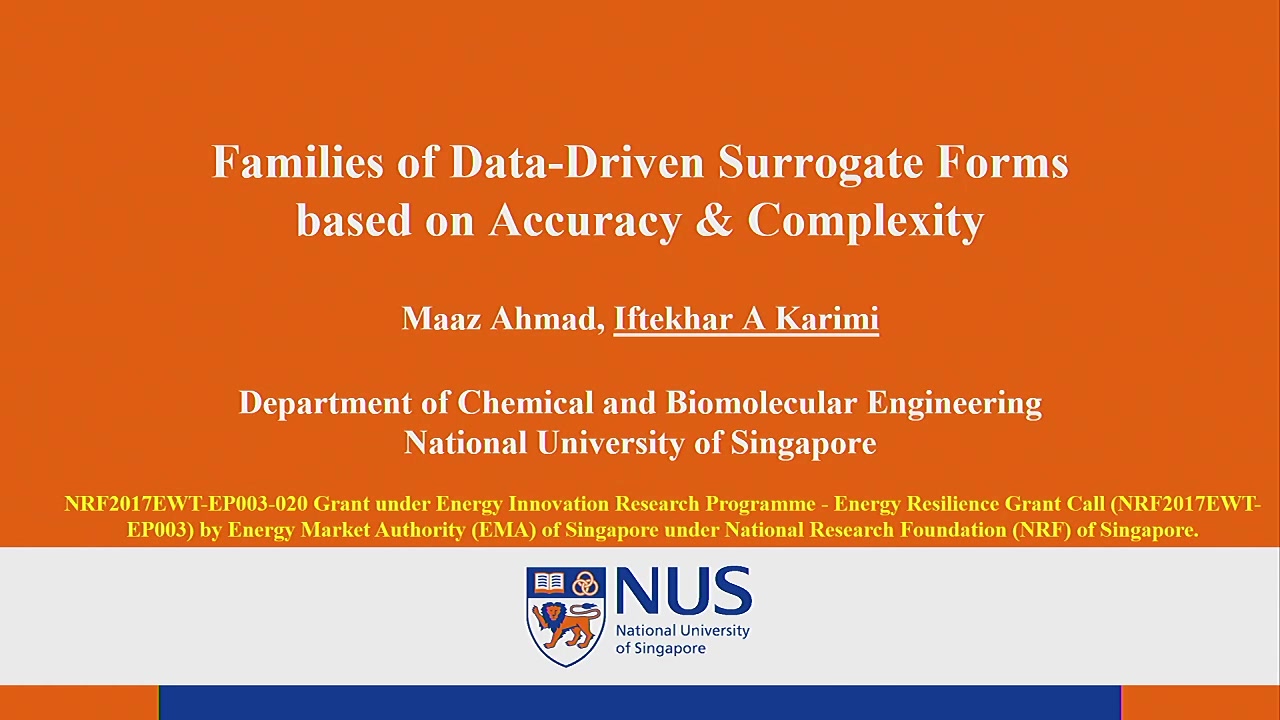 With rapid advancements in computational technologies and swift progress of Industry 4.0, one can incorporate finer details in digital twins to model intricate processes better. However, this comes at the expense of large computational burden associated with high-fidelity models. Data-driven surrogates or meta-models offer computationally cheaper alternatives to complex digital twins. They build approximate response surface by learning correlations between process inputs and outputs. Any surrogate model comprises of two components, a modeling technique and surrogate form (Garud et al., 2018). While the former indicates an underlying algorithm to build a model, the latter constitutes the analytical form and functional details of a model. Different combinations of modeling techniques and surrogate forms can produce a long list of unique surrogate models. The performance of any surrogate model would depend on system nonlinearities, quality and quantity of sampled data, and flexibility a surrogate model possesses. Previous works have attempted to study effect of certain data-specific features on performance of surrogates. Davis et al., 2017 observed that a surrogateâ€™s predictive performance is influenced by number of input dimensions, sample size, sampling technique, and shape of the data-generating analytical function. They analyzed the impact of these characteristics on training times and predictive performances of eight surrogates. Recently, Williams and Cremaschi, 2021 extended this idea to provide rules-of-thumb to aid surrogate selection for modeling and optimization tasks. They drew conclusions by evaluating the predictive performance of eight surrogate models based on normalized root mean squared error and adjusted R2 over various data sets with different features. Bhosekar and Ierapetritou, 2018 analyzed the effect of sample size and sampling technique on performance of nine different variants of Kriging modeling technique. They also highlighted similar performance of some kriging variants. This observation was also made in our previous work (Garud et al., 2018, Ahmad and Karimi, 2021) on meta-learning-based surrogate selection paradigm, LEAPS2. Certain surrogates showed close performance over most noisy or non-noisy data sets. While such observations are mentioned cryptically in literature, it would be interesting to identify and extensively report similar performing surrogates across various modeling techniques.

Preview Presentation:
Presenter(s):
Maaz Ahmad
Iftekhar Karimi
Once the content has been viewed and you have attested to it, you will be able to download and print a certificate for PDH credits. If you have already viewed this content, please click here to login.

Graphical Model Framework for Automated Annotation of Cell Identities in Dense Cellular Images.
C. elegans is an extremely useful model organism in understanding neural basis of behaviors because of several advantageous features. The nematode has a small...
Cybersecurity - Culture, Awareness and Training - the Right Approach for Plant Sites
One of the struggles I witness today is good training programs and poor training programs. What works well and started out on the right track, then slowly...