Explosions in Transformer and Circuit-Breaker Tanks Due to Arcing Events 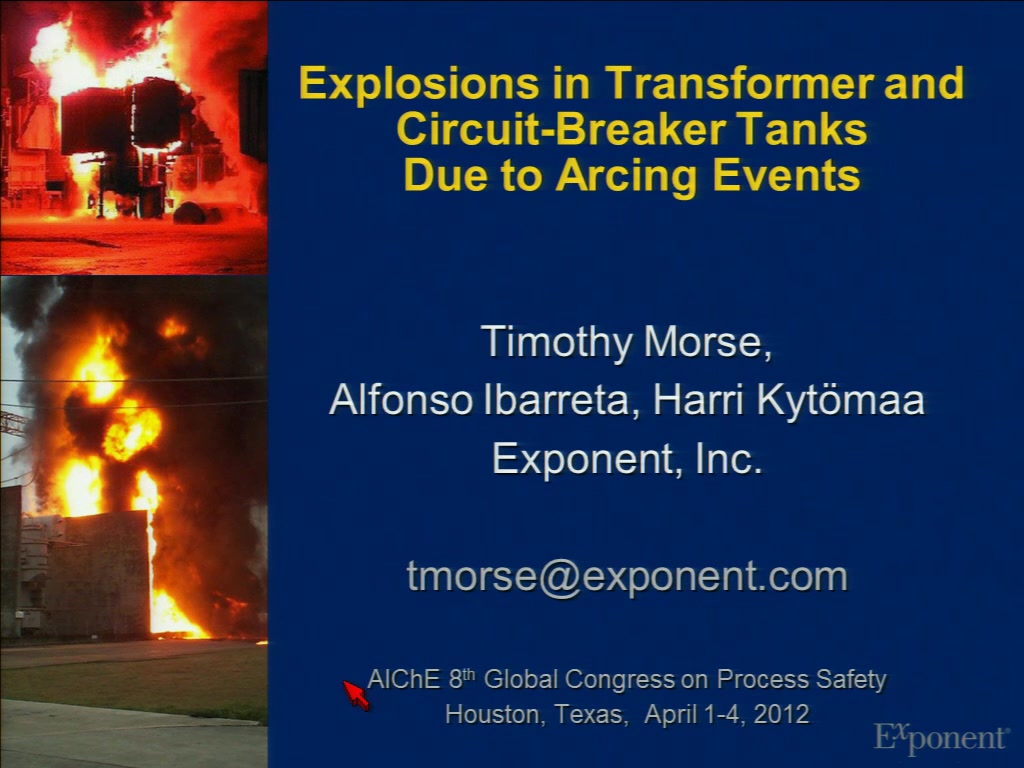 Industrial transformers and circuit breakers operate with large voltage differences between current-carrying internal components and the grounded tank walls. A breakdown in the dielectric strength of the insulating oil in the tank due to contamination or other causes can lead to the formation of an electrical arc inside the tank. The arc represents an extremely rapid release of energy, which can cause vaporization of the insulating oil and ionization of the oil vapor. This creates a rapid pressure rise inside the tank which can lead to failure of the tank or tank fastening system, an expulsion of oil, and in some cases, ignition of the oil mist and a fireball. Such events can cause considerable damage to facilities and in rare cases, injury or death.

A full characterization of a transformer explosion due to arcing involves multiple disciplines. It requires an understanding of the electrical arc dynamics (i.e. location and energy dissipation over time), thermodynamic and fluid dynamic analysis of vaporization of oil and the pressure rise inside the tank (which may take the form of a model or a full simulation), and an evaluation of the elastic and plastic deformation of the tank, tank lid, and any fastening components. The problem is made more difficult by the fact that the arc dynamics are coupled with the dynamics of oil vaporization. There is some limited experimental data and simulation data on such events, and several models for the arc energy and pressure rise have been proposed.

In the present study, we adopt a simple model for the arc energy transfer and determine the rate of pressure rise for a wide range of example cases, with and without pressure relief. We explore how avoidance of catastrophic failure depends on specific details regarding the size, geometry, and elasticity of the transformer or circuit breaker tank. As an example, a larger head space above the liquid level in the tank considerably reduces the rate of pressure rise, and therefore the potential hazard.

Preview Presentation:
Presenter(s):
Timothy L. Morse
Once the content has been viewed and you have attested to it, you will be able to download and print a certificate for PDH credits. If you have already viewed this content, please click here to login.