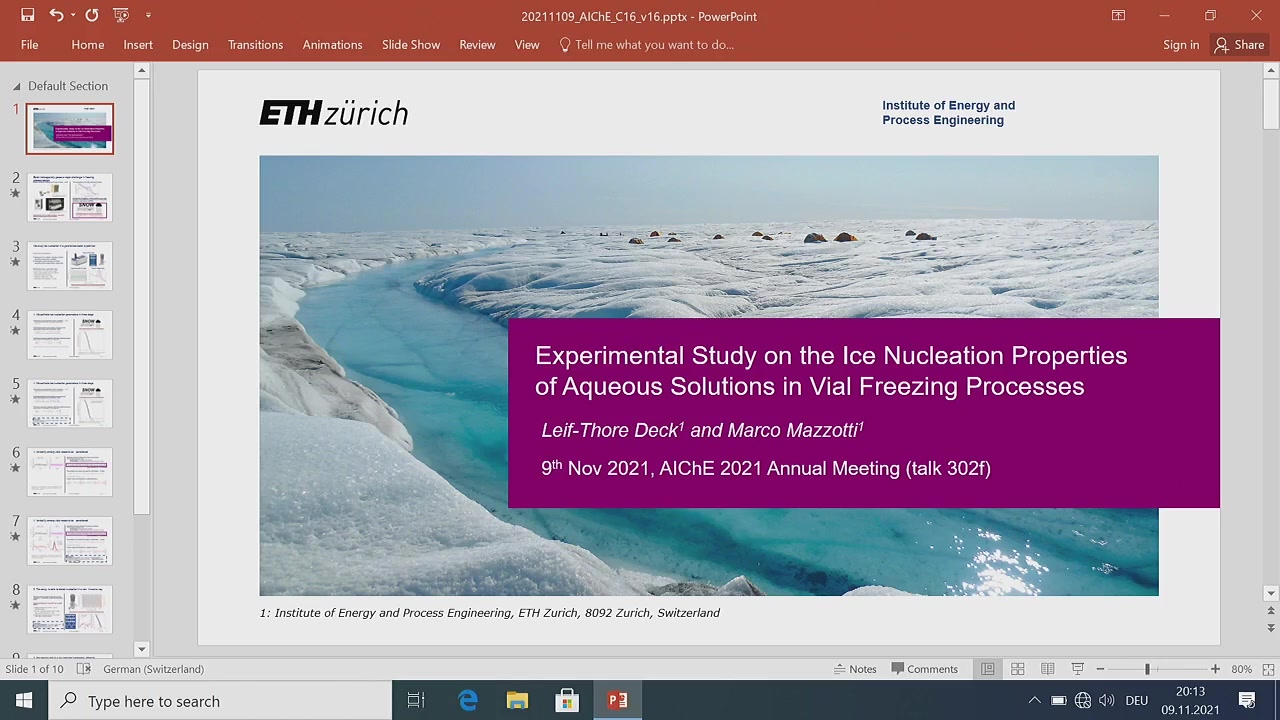 Freezing is an important process in the pharmaceutical and food industries to improve the stability and thus shelf life of various products. Ice nucleation is the first step of any freezing process; it is an activated process and occurs randomly in supercooled solutions. In small volumes, especially in the mL scale and below, supercooling in the order of 10 K and more is required to induce ice nucleation and thus freezing in a reasonable timeframe [1].

The prediction of the ice nucleation behavior of an arbitrary solution is challenging due to the stochasticity of ice nucleation and its interplay with solutes and heterogeneous nucleation sites. While there is a large body of research related to nucleation temperatures of microdroplets due to their importance in cloud formation [2], literature on larger volumes is sparse. In addition to homogeneous ice nucleation, the heterogeneous formation of ice nuclei is observed in industrial processes. Common heterogeneous nucleation sites range from suspended dust particles and dissolved gases to container surfaces. The effect of dissolved gases and particles especially is of importance in the pharmaceutical industry. Products frozen under GxP conditions, i.e. containing fewer impurities and thus heterogeneous nucleation sites, generally experience larger supercooling than those prepared under standard laboratory conditions. This difference in nucleation behavior between laboratory and GxP-conform production scale proves to be a major hurdle in upscaling of lyophilization processes and is thus of great practical relevance [3].

We thus aimed to develop a general understanding of the nucleation behavior of arbitrary aqueous solutions in GxP and non-GxP settings. To do so, we have carried out an experimental campaign in a batch crystallizer at 1 mL scale, close to the conditions in industrial processes. Our work focuses on quantifying the effect of solutes and setup-dependent heterogeneous nucleation sites to gain insight that can be used for the design of freezing processes.

The ice nucleation in a temperature-controlled vial is assumed to be an inhomogeneous Poisson process and we have estimated the nucleation rate J for both water and aqueous solutions in 1 mL batches [4-5]. To generate datasets of statistically meaningful size for this parameter estimation, we have carried out freeze-thawing experiments, i.e. we have been freezing and consequently thawing the same solutions several times in sequence. 10-50 of such cycles in 15 vials in parallel, generating in total 150-750 nucleation events, have been carried out per experimental run. We describe the effects of heterogeneity and solutes on the ice nucleation behavior of water with the water activity-based ice nucleation model (WABINT) [2]. WABINT assumes that the nucleation rate depends only on water activity and the type of nucleation sites present; the effect of solute thus is assumed to be limited to its influence on water activity and independent of the type of solute. We have analyzed solutions containing different types of solutes to investigate whether this assumption holds for the systems of interest.

We have performed experimental studies in the batch crystallization system on water and aqueous solutions of sucrose using various cleaning protocols.

First, we have frozen 15 vials containing ultrapure water under standard laboratory settings to investigate the intrinsic stochasticity of ice nucleation and to validate the experimental setup. Fig. 1a and 1b provide an overview over the temperature profiles used and show the obtained outcome of a single cycle for one cooling block with four vials. It is evident, that the nucleation events affect each other: The nucleation of vial A1 leads to an increase in temperature of all other vials in the same cooling block. This is due to the heat release upon nucleation and it is inherent to the setup. Moreover, we have conducted additional studies with only one vial in each cooling block to investigate the extent to which such thermal interaction leads to additional broadening of the distributions.

We have confirmed that the presence of thermocouples inside the vials did not affect the nucleation behavior of the freezing water for non-GxP conditions. Since literature on lyophilization in GxP settings commonly reports thermocouple effects on ice nucleation, we have developed an indirect approach for temperature measurement to run nucleation experiments with GxP vials without the need of opening the vials and to insert thermocouples.

Fig. 1c provides the experimental nucleation temperatures for the freeze-thawing of ultrapure water. We have observed not only the inherent stochasticity of nucleation for each individual vial, but also significant inter-vial variability. Some vials experienced very narrow temperature distributions with a broadness of less than 1 K; this is in accordance with literature studies on the freezing of microdroplets [6]. However, some other vials experienced broader distributions or showed a time-dependent decrease in nucleation temperature such as vial A1. This variability in nucleation behavior was observed despite extensive cleaning steps covering all parts of the experimental setup.

The source of such vial-to-vial variability is not well understood although it is widely reported; experimental studies on freezing in lyophilization report nucleation temperature distributions with broadness of up to 20 K for a single batch of vials containing the same product. We hypothesize that such variability is the consequence of both a variability in heterogeneous nucleation sites and the thermal interaction between vials. We have carried out an experimental campaign to provide insight into this phenomenon.

We present for the first time an experimental study on ice nucleation in a parallelized batch crystallizer at 1 mL scale. Our experimental data confirmed the presence of a vial-to-vial variability in addition to the inherent stochasticity of ice nucleation and of complex solute effects. Our experimental campaign includes the investigation of systems with various types of solutes and solutions prepared under different levels of cleanliness to improve our understanding of the ice nucleation process in these systems. Such understanding is crucial for the design and development of processes such as lyophilization and freezing for the purposes of storage, where a homogeneous freezing step is essential.

The authors thank The Janssen Pharmaceutical Companies of Johnson & Johnson for the support in the course of this project. 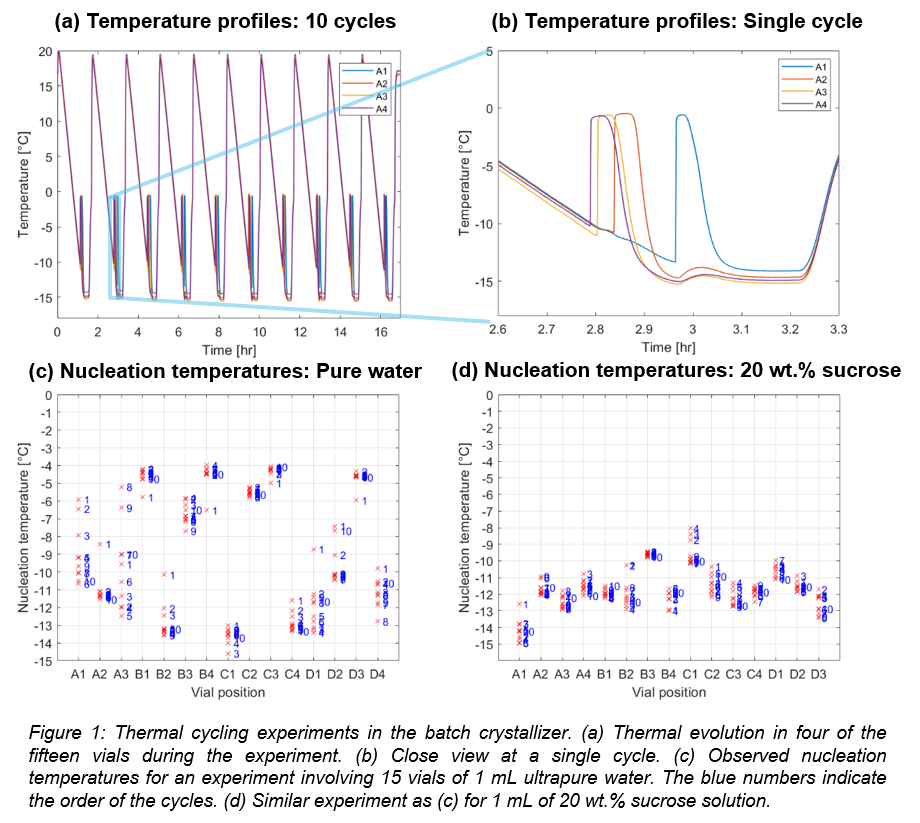 Preview Presentation:
Presenter(s):
Leif-Thore Deck
Marco Mazzotti
Once the content has been viewed and you have attested to it, you will be able to download and print a certificate for PDH credits. If you have already viewed this content, please click here to login.

Development and Commissioning of a Modular and Integrated Apparatus for the Quasi-Continuous Production of Crystalline Particles
In almost every industrial sector, companies are faced with constantly changing challenges. In the chemical and pharmaceutical industry, these range from...
Using Open Innovation to Design Chemical Products
In this presentation we will share our experiences as a solution provider for several open innovation projects. The goals of these projects were to develop new...