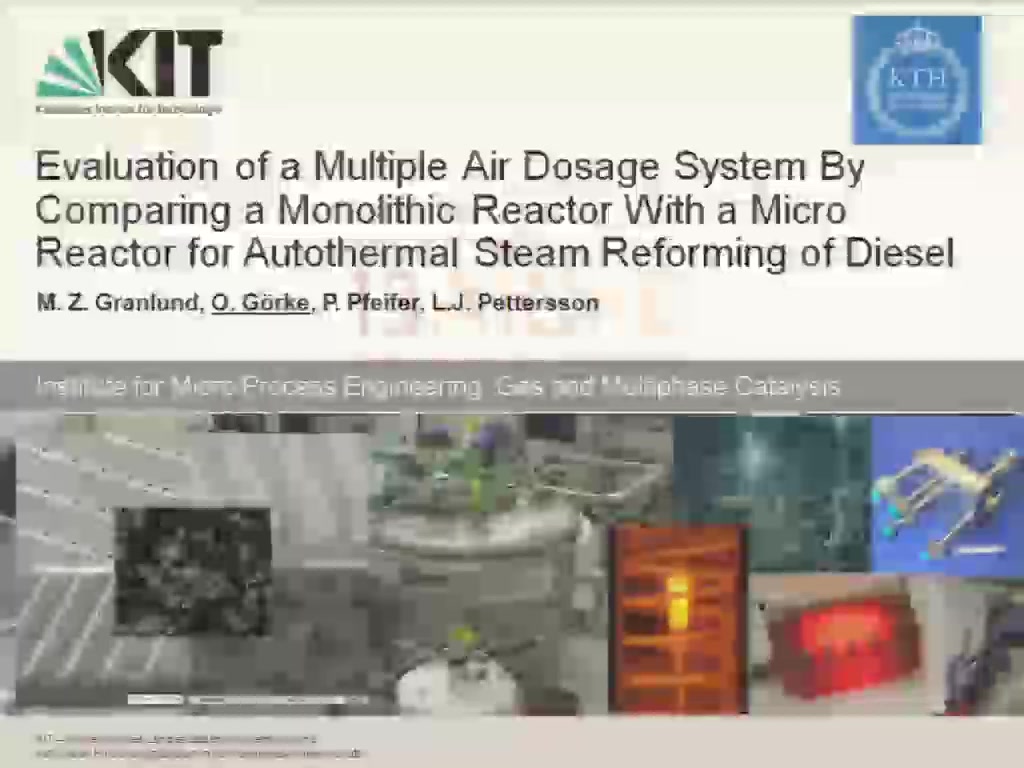 It is estimated that the heavy-duty diesel vehicles (HDDVs) contribute to approximately 30 % of the total emissions of nitrogen oxides (NOx) and particulate matters (PM) coming from the transport sector [1]. It is estimated that approximately 30 – 40 % of the engine run time is in idling mode [1 , 2]. The emission during idling is a large part of the total emission for the vehicle and there is a need to decrease those [3]. One alternative is to use a fuel cell system fueled by diesel , a diesel fuel cell auxiliary power unit (FCAPU) , in order to decrease the idling emissions. [4] The FCAPU’s main parts are a diesel fuel-processing unit a.k.a reformer , gas clean-up units and a fuel cell. There are three different processes for reforming fuel into hydrogen-rich gas that can be used; partial oxidation (POX) , steam reforming (SR) and autothermal reforming (ATR). The three processes have different advantages and for mobile application ATR is the most beneficial. The main reason is that the process does not need an external heat source , since it is a combination of the exothermic POX and endothermic SR processes. Other advantages are the short start-up time due to the quick thermal response and relatively high hydrogen production. [5] Due to the limitations in space , onboard HDDV’s the FCAPU must have a compact design. The ATR reactor is normally of the tubular type with the catalytic material coated on honeycomb monoliths to minimize the pressure drop , which also makes the reformer resistant to vibrations [6]. One large disadvantage with this reactor design is the characteristic temperature gradient developed over the monolith length , a consequence of the fast POX reaction at the entrance , causing a sharp increase in temperature at the beginning , and the slower steam reforming (SR) towards the outlet of reactor [7]. In order to limit the temperature increase in the beginning , better heat integration between the two reaction zones is necessary. One option to smoothen the temperature gradient could be to use a micro reactor that has better heat integration than the honeycomb monolithic reactor [8]. To further improve the heat integration between the two reaction zones , a micro reactor with four air dosing points axially along the catalytic surface , was designed. The idea is that the heat management could be further improved by dosing the air axially along the micro reactor to adapt the kinetics between the POX and SR reactions via a reactant gradient. With a better heat integration between the POX and SR parts of the catalyst the temperature stress that usually occurs in the beginning of the monolith would be minimized. The integration potentially leads to higher temperatures in the SR part , increasing the rate of reaction and higher H2yield may be obtained.   The catalytic material used in the comparative study between the two different reactor designs was 3 wt % Rh  supported on high surface area CeO2-ZrO2 (MEL Chemicals , 16.5 % CeO2/MOx) prepared by the incipient wetness method (Rh(NO3)3 solution , 9.53 w/w , Sigma-Aldrich solution). The catalytic material was applied to a 400 cpsi cordierite monolith for the conventional reactor design and on metal foils for the micro reactor design by flow-coating. The fuel used in the comparison between the two reactor designs was biodiesel (NExBTL , Neste Oil , Finland). The main advantages with this biodiesel are its low sulfur and low polyaromatic hydrocarbon content [9]. The monolithic reactor was used to examine the aging pattern and the influence of varying the oxygen-to-carbon and steam-to-carbon ratios in the temperature range of 700 – 900 ¢ªC with external heat source. The experiments were performed at a gas hourly space velocity (GHSV) up to 50 000 h-1and the oxygen-to-carbon-ratio was varied between 0.3 and 0.5 and steam-to-carbon ratio varied between 2 and 3. In the micro reactor the influence of dosing air at the different axial positions was evaluated in the temperature range of 700 – 900 ¢ªC. The amount of air dosed in the four different air inlets were varied in the full interval of 0 – 100 %.  By dosing 100 % of the air feed in the first air inlet , the micro reactor’s heat integration capacity was evaluated. Acknowledgement The financial support from KICInnoEnergy in the project SynCon is gratefully acknowledged. The Swedish Foundation for Strategic Environmental Research (Mistra) is also acknowledged for the financial support. Thanks also to MEL Chemicals , Neste Oil , and Corning Inc. for the supply of the CeO2-ZrO2support , NExBTL fuel and cordierite monoliths , respectively. References[1]  T. Huai , S.D. Shah , J.W. Miller , T. Younglove , D.J. Chernich , A. Ayala , Atmos Environ 40 (2006) 2333-2344. [2]  C.-J. Brodrick , T.E. Lipman , M.Farshchi , H.A.D.N.P. Lutsey , S.W.G.I.D. Sperling , D.B. Harris , F.G.K. Jr. , Transp. Res. Part D: Transp. & Environ. 7 (2002) 303-315. [3]  Dieselnet , www.dieselnet.com (accessed 12-10-11). [4]  N. Lutsey , C.J. Brodrick , T. Lipman , Energy 32 (2007-) 2428-2438. [5]  J.D. Holladay , J. Hu , D.L. King , Y. Wang , Catal. Today 139 (2009) 244-260. [6]  C.H. Bartholomew , R.J. Farrauto , Fundamentals of industrial catalytic processes , 2nd ed. , Wiley , Hoboken , N.J. , 2006. [7]  A. Beretta , A. Donazzi , D. Livio , M. Maestri , G. Groppi , E. Tronconi , P. Forzatti , Catal. Today 171 (2011) 79-83. [8]  J. Thormann , P. Pfeifer , K. Schubert , U. Kunz , Chem. Eng. J. 135 (2008) S74-S81. [9]  Neste Oil , http://www.nesteoil.com (accessed 24-05-13).

Preview Presentation:
Presenter(s):
Oliver Görke
Once the content has been viewed and you have attested to it, you will be able to download and print a certificate for PDH credits. If you have already viewed this content, please click here to login.